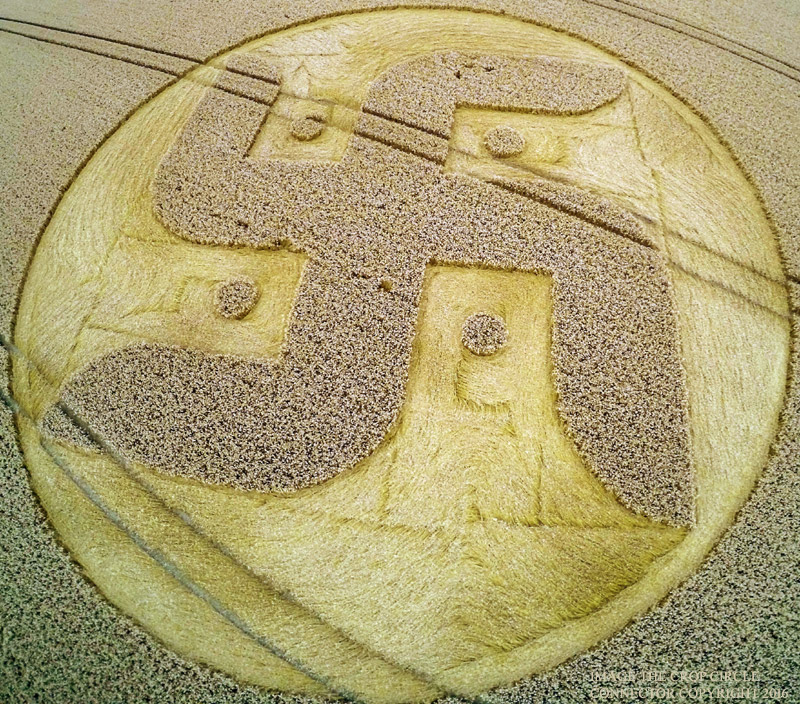 This is what you need to know about THE SWASTIKA

What is a swastika?

The swastika (Sanskrit svastika, "all is well") is a cross with four arms of equal length, with the ends of each arm bent at a right angle. Sometimes the crossing lines are horizontal and vertical and other times they are an angle, forming a central "x" shape. Sometimes dots are added between each arm (e.g. the "swastika rangoli" picture below).

The swastika is an ancient symbol that has been found worldwide, but it is especially common in India. Its name comes the Sanskrit word svasti (sv = well; asti = is), meaning good fortune, luck and well-being. This original meaning of the swastika is a far cry from Western associations of the symbol, which are largely negative.

The swastika is most commonly used as a charm to bring good fortune (in which case the arms are bent clockwise), but it has a variety of religious meanings as well, which are described below.

The right-hand swastika is one of the 108 symbols of the Hindu god Vishnu as well as a symbol of the sun and of the Hindu sun god, Surya. The symbol imitates, in the rotation of its arms, the course taken daily by the sun, which appears in the Northern Hemisphere to pass from east, then south, to west. (It is also a symbol of the sun among Native Americans.) The left-hand swastika (called a sauvastika) usually represents the terrifying Hindu goddess Kali, night and magic. However, this form of the swastika is not "evil" and it is the form most commonly used in Buddhism.

The auspicious symbol of the swastika is very commonly used in Hindu art, architecture and decoration. It can be seen on temples, houses, doorways, clothing, cars, and even cakes. It is usually a major part of the decoration for festivals and special ceremonies like weddings.

Use by the Nazis

The Nazis adopted the swastika because it was understood as an Aryan symbol indicating racial purity and superiority.

Its fake you can see the outline and a bad job of planking out from the circles. I could have done better blindfolded.

The Right Hand Swastika is auspicious
The right-hand swastika is one of the 108 symbols of the Hindu god Vishnu as well as a symbol of the sun and of the Hindu sun god, Surya. The symbol imitates, in the rotation of its arms, the course taken daily by the sun, which appears in the Northern Hemisphere to pass from east, then south, to west.

Would good people from space cause this farmer $1000 of crop damage? Or are these UFO greys evil graffiti artists up to no good? Who is choking Sherry Shriner when she speaks against this UFO invasion? I don't believe that these circles harm the wheat.

they-interdimensionals-use a device shaped in a small ball of light  that is programmed with the design-when it enters 3d it -or several of them at once-activates above the crops at a certain height using the water molecules in the air as steam in the desired design -I'll bet if you looked at the weather records for the evening or overnight period when this or any circle is made it was calm, humidity normal to higher levels; this is a right hand swastika

It has also meant a symbol of good luck, prosperity and all things auspicious for other ancient cultures, including the Vikings and Greeks, besides Hindus, Buddhists and Jains. According to astrologer Sunita Chabra, the right-handed Swastika brings prosperity, offers a shield against the four elements and signifies the four dharmas. The left-handed anti-clockwise suavastika is destructive.

In Hinduism, dharma signifies behaviours that are considered to be in accord with rta, the order that makes life and universe possible,[10][note 1] and includes duties, rights, laws, conduct, virtues and ‘‘right way of living’’.[7] In Buddhism dharma means "cosmic law and order",[10] but is also applied to the teachings of the Buddha.[10] InBuddhist philosophy, dhamma/dharma is also the term for "phenomena".[11][note 2]Dharma in Jainism refers to the teachings of tirthankara (Jina)[10] and the body of doctrine pertaining to the purification and moral transformation of human beings. ForSikhs, the word dharm means the "path of righteousness".

No worries, it's just the GFL who're announcing that they'll bring Hitler back. ;)

More info about this Crop Circle @

Carolin Radcliff commented on the blog post 'MATTHEW'S MESSAGE via SUZY WARD: THE ILLUMINATI AND NESARA'
"A very encouraging message! I pray that this will happen. Currently, I only see things being done…"
44 minutes ago

Susanna Antonyi commented on the blog post 'THE GREAT SAMHAIN GATEWAY 2020 through MAGENTA PIXIE & ACTION PLUS INTENTION EQUALS COHESION'
"Fantastic message, thank you very much! We will have a little ceremony here in Malmö, Sweden,…"
9 hours ago