World Wide Veganism On The Rise And Overshadowing Vegetarians And The Main Reason MILK..Dairy Products

The main reason Veganism is taking over from vegetarians is because of milk....dairy products

Vegans are right that they don't have dairy products because cows are not treated properly so the milk they produce has low vibes, not that tasty and less energy.

Vegans Why I Don't Drink Milk  by Ashley Palmer.

As a child, I hated almost all dairy products. I only “drank” skim milk when it was in my cereal bowl and after I’d added water to it. I picked the cheese off my pizza. I wouldn’t even touch chocolate, which meant that my mother, much to her delight, got all my chocolate Halloween candy. I used to scrunch my nose and say, “This makes my throat feel slimy!” Unfortunately, as I got older, I slowly incorporated these products into my diet, and it wasn’t until college that I began learning the awful truth about milk.

How Are Cows on Dairy Farms Abused?

I was shocked to learn that cows on dairy farms are repeatedly impregnated using artificial insemination. Their babies are torn away from them at birth, with male calves destined to become veal or beef and female calves destined to suffer the same fate as their mothers. These cows are then genetically manipulated to produce about 10 times as much milk as they would naturally, spending their lives constantly bloated and in pain. And cows on organic farms can suffer even more because when the animals’ udders become infected, many farmers will not administer medicine, as that would prevent them from labeling the cows’ milk as organic. On average, cows on dairy farms live for about four or five years, whereas under less stressful conditions, they would live for approximately 25 years! Stress and fear plague these cows on a daily basis, and it’s no wonder that at the end of their short lives, they are completely spent and often lame.

Ever hear anybody say that milk consumption is actually linked to osteoporosis? Because it is. In fact, dairy products have been linked to a long list of health problems, including osteoporosis, heart disease, some types of cancer, and many childhood illnesses! Trust me, I was shocked too. All at once, I found out that the dairy industry mercilessly wreaks havoc on both cows’ lives and humans’ bones. You can most effectively and healthfully maintain strong bones by exercising, eating plenty of leafy green veggies, getting your daily dose of vitamin D, limiting your salt intake, and avoiding animal protein. Talk about convenience—what’s good for you is also good for animals!

How Many Vegan Milk Options Are There?

When I first decided to cut milk from my diet, making the transition seemed daunting. As I mentioned, by the time I’d reached adulthood, I loved dairy products just as much as the next person. How could I live without milk? I thought that it would be impossible. But once I opened my mind to the idea of change, I realized that many tasty and convenient vegan options are available. If you’re thinking about making a change, just go to your local grocery store and check it out! You can drink soy, almond,  rice, or hemp milk, to name a few. Many of these vegan options even come in different flavors, such as sweetened, unsweetened, vanilla, or chocolate! There are so many options, and it’s fun to taste-test a few in order to determine which one you like best. 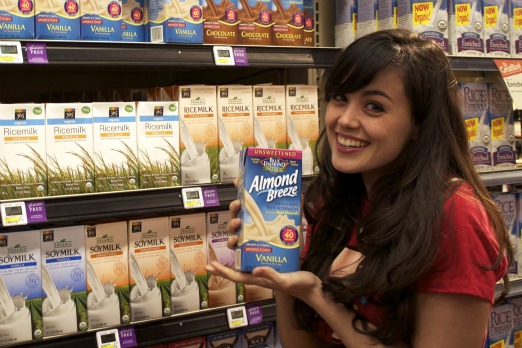 As you can see, I’ve come full circle. My “picky” tastes as a child were simply the result of my body telling me that the consumption of dairy products is unnatural. I like to think that I was born to be vegan but just didn’t know it at first. Fortunately, now I do know the truth about dairy products, and I don’t want to support the abuse of animals or jeopardize my own health, especially when there are so many convenient vegan options available. And that’s why I don’t drink milk.

Krishna you're here since 2012 posting the same thing always lol

Valana (Patti) replied to the discussion 'MOMENTS TO REMEMBER' in the group Cmdr. Val Thor: LIVE
"Here's what I started out to explain.  I don't mind what words others use but as one…"
5 hours ago

Valana (Patti) replied to the discussion 'MOMENTS TO REMEMBER' in the group Cmdr. Val Thor: LIVE
"Than you for liking our post, Alan.  We are just trying to write as much as we can, I have…"
6 hours ago