The Divine Will of the Galactic Logos 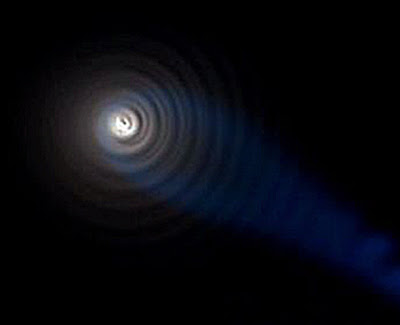 Lord Surea is the Galactic Logos and his will is received on a daily basis by the Great Blue Lodge on Sirius B......

A ritual stargate opening is conducted by the Sirian Atars in space, exactly located between planets Atarmunck (Sirius B3) and Samanet (Sirius B4) and the great blue light of creation is invoked...Through this transference of stepped-down higher cosmic energies, the divine will of Lord Surea is known...and becomes available to us.

In the Sirian language, the name for such a stargate opening ceremony, is defined as an "aktaiwa." The Council of Nine receives the information packages from the Logos and relays them out to the rest of the galaxy...the will of Prime Creator.

So this very special stargate location, within this Milky Way galaxy, is held sacred on GFL worlds and is the actual crown chakra of Lord Surea, who ensouls this entire galaxy....

The heart chakra of Lord Surea is well known and is located at the galactic core.

In the works of Alice A Bailey, which were written decades ago and a product of her link with Master DK, the Tibetan, all references to the Galactic Logos were replaced by the esoteric term; "The One about whom naught may be said" (OAWNMBS.)

And the reason for this, was that Master DK was not permitted to reveal the name of the Logos and was waiting for those of later decades to do so..Those permitted to do so on Earth are the Sirian starseeds, linked to the Great Blue Lodge (of the Great Blue Light of Sacred Creation) and members of the Sirian Atar Clan, itself...

A reminder to those who may be interested in the wording....The Blue Lodge spoken of in this article has no actual connection with the "blue lodge" of Freemasonry. It is of an order far greater in magnitude than the material affairs of Earth, although it stands as a symbol for the secret sacred societies to emulate, as has been the case for millennia.

Oryon Councils are receptors and relays of the great blue light of sacred creation....They exist on various planes and throughout this galaxy...The term "Oryon" is a Sirian word, for "lesser heavenly council" and is not related to the Earth term "Orion" which describes a particular constellation...

The Sirians are honoured to answer your questions, dear starseed....

Think of the Council of Nine as the galactic "brain and spinal cord" within the body of the Logos and the Oryon Councils are the "nervous system," reaching all parts and connecting this galactic form...

i see, *oryon* is in the sirian language;

That is a good way of defining the councils alikening it to a *body* , i understand the concept much better now.

Thank you for explaining all that;

I am honoured to have the sirians as my dear friends, this information is educational & much appreciated for anyone wanting to know a little more on the divine will of the logos.

much love to you and our divine families who put work into helping this cause...<3

In the Sirian language; 'oryon' is a lesser Heavenly council and 'aktaiwa' means a summoning....So the daily ritual is held in space between two prime waterworlds, in orbit around Sirius B4, at the site of a highly significant stargate portal; named: "AKTAIWA GATE" In effect it is the reason for the importance of the Sirian star system, for it is the very CROWN CHAKRA of Lord Surea, the Galactic Logos's DIVINE WILL FOR THE CREATION...The great blue light, of the Great Blue Lodge on Sirius, which steps-down the spiritual energies, for galaxy-wide distribution, to many lesser councils, including Shamballa: "where the will of God is known."

Arahat athersata is the highest cosmic spiritual and a necessary level of consciousness required, to be members of that exhalted and illustrious body; THE COUNCIL OF NINE......

The Atar clan are the spirit-warriors of the 6-clan system. This summoning ritual is a type of invocation, using a group of twelve Atars, aboard ship, in geocentric orbit around planet Atarmunck, near the Aktaiwa Gate, itself, which once activated, emits bright blue light, skillfully 'absorbed' by thee attendee members of the Council of Nine, by definition, spiritually qualified custodian-guardians, of the great blue Light of creation...

Only The Council of Nine can absorb pure spiritual energy this way, daily without fail, tireless service to the entire creation, including ourselves, here on Earth, forever and ever......Cosmic colossi...We all owe them much....

Mercifully, to aid comprehension of this salient summoning of blue Light, which is defined by the 1st ray of will and purpose, it's an occult truism that each higher expression, has a lower correspondence, as per the Hermetic axiom. And thus we see the lightning bolt crashing to Earth, to destroy the ill-prepared. A lower corresponding force to cosmic fire, yet likewised defined by the 1st ray, as thunder is the 2nd ray. A blue spark that flashes great POWER.

In order to comprehend self-motivation, one must comprehend both the superficial persona [mask] and the Soul [ego=I Am] and determine one's rays, as expressed across the COSMIC AETHERIC PLANES, which I list below, the highest refined purity to the lowest crude matter:

Each plane has seven sub-planes within it; higher to lower, so the listed 7th 'plane' has lowest three sub-planes of; gaseous, liquid and solid...to get your bearings...;-]

An incarnated person is three-fold; mind [5]---emotions [6]---body [7] [there are further details I will not go into here re co-ordinated personality and aetheric counterpart to physical body.]

An Ascended Master is three-fold; Atma [3]---Buddhi [4]---Manas light body [5]
The Soul of each human, likewise, albeit not yet passed probation to qualify as full member of Kingdom of Souls, until karma ended upon the Earth chain evolution.......TBC

Now, the defining motivation of most Earth human personalities may be to 'get on in life.' Raise a family, make a thriving business, buy a good house with a garden, career promotion, etc...

When one enters the Kingdom of Souls, all needs are met, instantly and there is a timelessness, allowing as much 'time' needed for family, or a home with a garden, 'career,' as needed. There is greater ability here for clear thinking, beyond human mind and a buddhic emotion [peaceful pool,] rather than astral emotions [choppy waters.]
Consequently, the blessed Soul possesses an overwhelming will to offer freely, good deeds. A defining motivation TO SERVE FELLOWS, TO SERVE THE DIVINE PLAN FOR CREATION..............tbc

Note that on my list of cosmic aetheric planes, the highest refined planar energy is number1, that of the Logos for this planet, known by many names...I say Lord Yahweh...For others; Sanat Kumara, or Rex Mundi...Importantly, there is 'One True God,' for Earth....Yet there are other planets, suns and galaxies, all likewise ALIVE SPIRIT IN THE CREATED UNIVERSE...
So you may see that even though I listed seven cosmic aetheric planes for Earth chain evolution, there are higher solar and galactic planes, still; cosmic astral, cosmic manasic, cosmic buddhic and higher and HIGHER EXPRESSIONS....no limit to creation for Spirit to experience....tbc

As you may grasp, the Soul or Solar Angel, upon the three-fold planes described earlier, though important for gleaning the 'gold' of life experiences, is in itself, a reflection of the true spiritual self; A DIVINE MONAD......So pure spirit must use bodily vehicles to learn about creation....

My rays, of my vehicles, multiple planes is; 3-7-4-6-7 [soul-persona-mind-emotions-body

For Monads uniquely, only three rays of aspect are a possibility here. We are Monads of 1st ray [will, purpose, power,] 2nd ray [love-wisdom,] or 3rd ray [activity, intelligence, illumination.]

As a Sirian starseed, once Sirian [got trapped here in Atlantean times,] and one seeking the path [back] to Sirius, you will not be surprised, I'm a 1st ray DIVINE MONAD SPIRIT........

Building the COSMIC ANTAHKARANA between Sirius and Solaris, is an evolutionary goal of the great Logoi, of both systems, bridging esoteric and exoteric parity for onenes, between the two. A macrocosm of the Human microcosm, explained earlier, on this forum.....

Krishna Kalki replied to the discussion 'Leaked Documents Implicate Big Banks In Global Money Laundering Scandal ..SO WHAT'S THE SOLUTION'
"These rascals are not banksters but gangsters"
2 hours ago

Krishna Kalki replied to the discussion 'Leaked Documents Implicate Big Banks In Global Money Laundering Scandal ..SO WHAT'S THE SOLUTION'
"The solution is to arrest all those guilty and put them in fema camps as if you let them free they…"
2 hours ago

Krishna Kalki replied to the discussion 'YOU ARE WHAT YOU EAT ....The Meat Eaters Carry The Lowest Vibes Plus Heavy Karma'
"Slaughterhouse, butchers, supermarkets selling meat, meat serving restaurants .. ALL MUST GO ...NO…"
5 hours ago

Roberto Durante commented on the blog post 'THE MAINSTREAM MEDIA IN AUSTRALIA IS THE SIDE OF THE PEOPLE...AMAZING!!!!'
"great and I share it on all my social media"
6 hours ago

Roberto Durante liked amparo alvarez's blog post THE MAINSTREAM MEDIA IN AUSTRALIA IS THE SIDE OF THE PEOPLE...AMAZING!!!!
6 hours ago