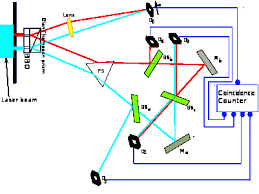 Of all the experiments that attempts to prove quantum mechanics, the delayed choice quantum eraser takes the beer being the most amazing! I am bringing this here because again I hear people saying that quantum mechanics teaches that when we believe in something, it comes into existence! (Why the hell do people want to believe in a bubble gas of a universe). But here I will show you the prototype of Quantum experiments. You will see that there is nothing like 'observer'!  Quantum bozo, totaly bamboozled by light, kill his hours gawking at criss-crossing rays that he doesnt understand! Quantum physicist is an hat swapping shell gamer you won't want to listen to, especially if you don't know science and/ or maths.

It borders on being a stage magician to say 'observer' when you mean 'preparation for observation'. Essentially you have swapped the hat and then pulled out the rabbit! This is essentially what the quantum guys are doing here, and in all the other experiments! There is no observer here, any more than an observer is there in any experiment. What alters the experimental outcome is an arrangement that facilitates observation, not the observer! But this is the case in all experiments!! If I place a telescope on my eye, I also block the light on the path to the ground. In this sense there is nothing new quantum magicians have discovered! But the quantum eraser experiment is still amazing, but for different reasons other than those peddled by quantum 'magicians'.

So it is not a conscious observer seeing through the detectors that alters the experiment. It is not a confused observer at D1 and D2 that causes interference pattern at D0. Rather, it is the presence of rays that can confuse the observer that does that. To farther highlight that it is not even the detection of the light at D3 and D4 is the fact that the signal to these detectors is delayed (hence the name). That is before light reaches D3 or D4, interference pattern has already formed at D0! So ironically, this experiment actually spectacularly refutes QM in that it shows it is not measurement that causes interference pattern to disappear at D0. These two, measurement and interferance pattern, are merely corelated with each other. Instead of learning this obvious lesson from the experiment, quantum lunatics pulled out yet another insane, unfalsifiable, obvious rubbish: that the measurements at detectors affects the past!!! As you can see, the experiment actually shows nothing of the sort! The 'backwards causality' is a stupid ad hoc to save an already silly idea that would be easier and better to just discard it!!

Observation does not cause a 'collapse', because a collapse can happen before observation. Instead of making this sound inference, a 'signal back in time' is proposed to make their claims effectively unfalsifiable! When thinking is not right, no experiments are of any value!

Views: 35
E-mail me when people leave their comments –
Follow

The Galactic Federation of Worlds is here to help Humanity of Earth. https://youtu.be/Maud6Bu3dqQl find Elena Danaan the best that comes forward from her heart to help the people of earth,Her mission is simple,to inform the masses to 'Wake Up' This…
See More