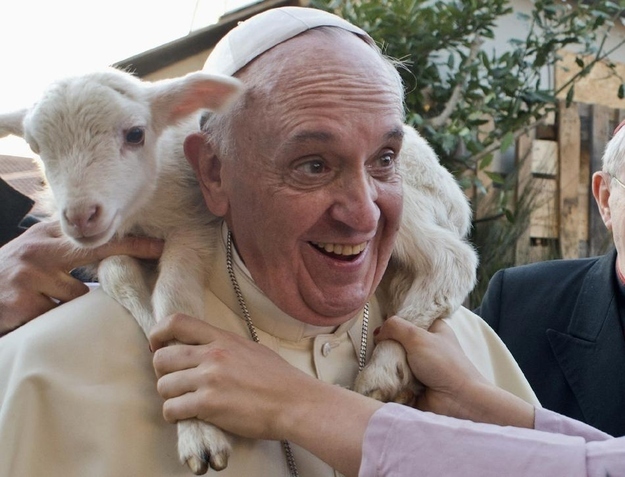 Among the oldest Christian communities , the lamb was on the pastor's shoulders (no plate )symbolized the soul saved by Christ .
Lamb on the shoulders of the shepherd is a sign of compassion and caring for the new life that Christ has provided.

When Jesus came , he tried to inspire people to a higher notion of sacrifice. Instead of sacrificing some poor animals who did no harm to anyone , he taught people to sacrifice their own inner animal and desires as inner animal slaughter such release energies that are more valuable and can be used in spiritual work . Those who understand this are on the way to climb; those who do not understand him are still stuck in the stalls or cages - symbolically speaking - along with their animals they sacrifice and do nothing to contribute to a greater deepening of their soul in the dark.

I propose this year to accept the sacrifice interior new life based on compassion and responsibility for the lives of animals and the others and become the best! How we want to have peace in the world and in our hearts if we have the plate "war".

Killing Easter lamb has no basis in the Christian tradition, but rather has its roots in the Old Testament.

"It's a bloody ritual in strong contradiction with the concept of the Resurrection, which brings renewal of faith and hope.

It is a ritual that is not necessary in a society like ours, already steeped in violence and death that serves only to satisfy the interests of the food industry. "

Views: 27466
E-mail me when people leave their comments –
Follow

"Were you come from? I mean your Family. Some Japanese here ;) ? Love Japan for it's tradition to have Respect infront each other and bow.."

"My father (R.I.P. 2015) told me when he was still alive that we, i.e. only on my father's side, are Mongolians of Russian descent, whatever that may mean. His brothers say so too. I was told that we are related to Genghis Khan.
My Mother and her…"

"The future sun will be enhanced to perfection, within a revitalized solar system....
Readers may be interested to know what the future solar system will comprise....Which planets remaining, or removed, or added.....

The Solarian Star Nation will be…"

"Readers may be interested to know what the future solar system will comprise....Which planets remaining, or removed, or added.....

The Solarian Star Nation will be designed, by the Elohim and GFL solar engineers, to be as perfectly viable as the…"

THE PLEIADIAN LIGHT FORCES ARE SENDING US THIS ENERGY UPGRADE. THIS IS THE TIME TO MERGE WITH OUR EMISSARIES OF LIGHT IN ORDER TO GET FULLY SYNCHRONIZED WITH THEIR VIBRATION. THIS ENERGY WILL CONNECT ALL OF US TOGETHER AS A TEAM AND CREATE THE…
See More

Here we are again, then. A thousand topics one could pick and yet, not one seems appropriate. So, perhaps once again, I feel it best to leave it up to you. You seem to always know the ‘Soup of the day’.Welcome, Blossom, and All who Enjoy our…
See More
More…
Loading ...