Greetings in the midst of May. :)

We’ll be posting an update about the New Earth Grid soon, and how the overall energies are shaping ‘up’, but will take a little pause (paws!) here for a moment to bring into focus a stream of the Leonine Light that has been quietly cradling and stabilizing the Earth’s subtle and physical planetary field continuously through the great Shift of vibration and consciousness currently in progress  ~ here on Earth, throughout the Solar System, and on a wider galactic level.

In the past few weeks, an amplified flow of the Mother Star Sirius has been bathing the Earth and Solar System, honed to particular node points of the Earth Grid through the lightship Sophia (see previous post). Flowing with the Sophia are many beautiful higher dimensional lightships of the Leonine and Feline beings of Sirius and Antares, whose origins in this galaxy go back to the constellation of Lyra and the first galactic federation…and beyond that, to other universes.

The Leonine ship most often flowing its vibration around the area where I live is named the Shem’Arua (Light of the Lion), a large disc-shaped lightship which you can find more about on the Shem Arua page. This ship is captained by a wonderful, loving White Lion Twin Flame pair, Altara and Arudia. They have at times projected their awesome light-forms around the garden here, and appear visibly as shining white orbs in the house, when we’re connecting and communicating together.

Their faces ~ and those of other lion and feline beings on board the Shem’Arua or associated ships ~ often take shape overhead in the clouds, signalling their close presence, frequently forming around or close to small ‘pod ships’ flying out from the Shem’Arua on various energetic assignments, often in a protective guardian role, transforming dense energies in this area (and all around the planet).

Our Leonine brothers and sisters ask for the photographs below to be shared now, which are vibrating with their love light, the feeling of being held in the arms of a super loving family of divine peace, harmony, happiness and constant affection. If you’re ever feeling fatigued or swirled by the intensity of the energies Shifting at so many levels around and within this beautiful Earth, open your Heart to the Feline Star Families of highest light and love, and give yourself the gift of relaxing in their warmth…and radiating that warmth and peace to all around you.

Their pod ship first flashed as a tiny pinpoint of light directly beneath a small cloud with leonine faces softly forming in it.

As the ship flew lower, in front of a thicker bank of clouds, its appearance became more defined as an elliptical-shaped silver-white lightship.

More beautiful Feline and Leonine beings formed clearly in the clouds three days later, radiating so much Love, and they share this with all humanity, who they love dearly. 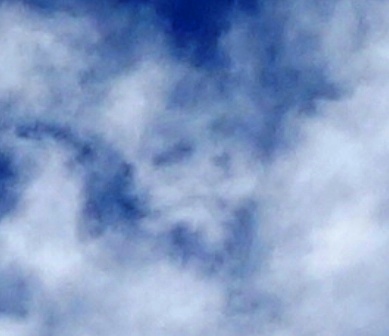 Relax, breathe, and let yourself feel and appreciate the heart-warming, soothing, strengthening inner purrrr of the Lion Star Family gathered around this planet, dear friends of the ascending Earth. Stay steady on the course, and know that all is on track in every moment, as you/we continue to anchor unconditional love and unity, for all.

For more beautiful galactic energies, we’re delighted to be able to share photos and videos from dear friends and guest contributors on this new page: Guest Photos

And we’re also happy to announce the release of an ‘ascension assistant’, the Inner Divine Essence, which you can find out more about at Heart Star Essences if this resonates for you.

With Love, Joy & Gratitude to you all,