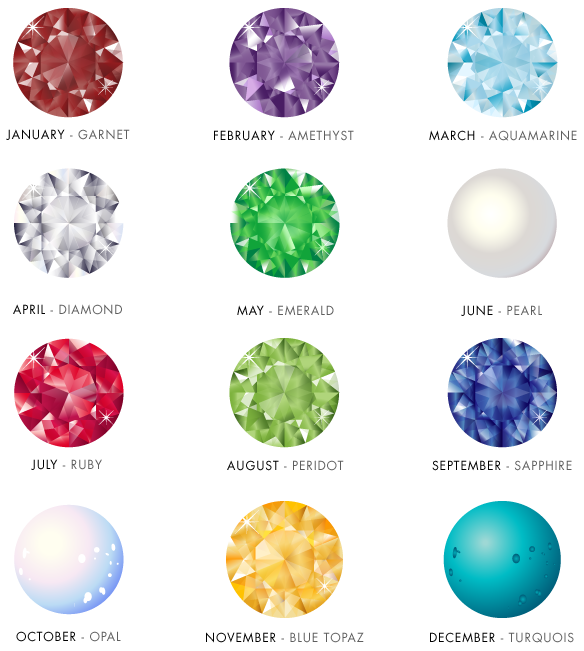 From earliest times, gemstones have been valued for their beauty and rarity. Both ancient Indians and Babylonians believed that certain gems carried strange and wonderful cosmological powers. It may have been the Assyrians who first attached meanings to desired gems as early as 1400 B.C.

In both the Old and New Testaments of the Bible, gemstones are given significant mention. In Exodus, the breastplate of the Jewish high priest contained 12 stones in four rows of three each to represent the 12 tribes of Israel. At the end of the Bible, in Revelation, St. John describes the 12 beautiful gemstones that were laid in the foundation of the New Jerusalem.

During the first century, Flavius Josephus connected specific gemstones to thesigns of the zodiac. Wearing the right stone each month would ensure access to special healing or magical powers. Those who could afford such luxury collected all 12 stones so that they were adequately empowered and protectedthroughout the year.

Later, Jewish gem traders in Poland or jewelers in Germany may have created the first birthstones listings, which were quickly popularized in poetry. The famous jewelry business Tiffany & Co. published one of several Gregorian Birthstone Poems in 1870. Specific qualities were assigned to the gems as they were matched with months of the year.

A modern list was created in 1912 by the National Association of Jewelers and updated in 1952. In 2002, tanzanite was added to the December listing, and just four years later, the ambitious tanzanite cartel suggested giving this particular stone to every child rather than just those born in December. They promoted sales with the logo, “Be Born to Tanzanite.” The fact that most people haven’t even heard of tanzanite would suggest that their promotional drive did not really catch on with the public.

While the truth is that a gemstone is probably little more than a lovely piece of Mother Nature’s handiwork, below, you can find the stone that matches your birth month and discover its fabled benefits:

January-Garnet is found in every color except blue. It might prevent nightmares and snakebites and can provide directional guidance in darkness. Wearers may see an increase in their self-image, will power and energy levels, and nervous people may feel calmer. Faith, love and constancy are its attributes.
February-Purple amethyst speaks of peace, temperance, serenity and royalty. Wearing this stone may protect you from the effects of drunkenness. The Pope always wears an amethyst ring.
March-Pale blue aquamarine gemstones and the bloodstone are associated with good health, youth, love and hope. Wearing this gem may reawaken married love, build your courage and increase your happiness.
April-Diamonds come in several colors, but they share the same association with eternal love and invincibility. It was once believed that they could also ward off insanity.
May-Green emeralds speak of health, faithfulness, fertility and improved eyesight.
June-The cool, milky beauty of pearls or moonstones suggest chastity, modesty and stable marriage relationships. These gems are available in sophisticated black, gray, chocolate and the familiar creamy-white colors.
July-Red rubies are tokens of harmony and peace. Their beauty speaks of strength and nobility of character. Wearers may attract both good luck and good friends.
August-Light green peridot has its own charming sparkle. Tradition says you will be able to successfully ward off evil, enchantments and depression if you wear or carry peridot.
September-Sapphires are available in a variety of delicate colors in addition to the more common blue shades. They speak of dignity, loyalty, serenity, faith, purity and wisdom.
October-Opals and tourmaline represent hope, creativity and innocence. They also protect the wearer from envious, mal-intentioned people.
November-Yellow topaz and citrine are associated with strength and healing for both body and mind. They offer protection to travelers and support good mental health.
December-Turquoise, blue topaz and tanzanite represent a happy life that is filled with good fortune. Headaches may be relieved or prevented. Ancient practitioners believed that turquoise would actually change color when the wearer was ill or in danger.
RedCJewels created this beautiful Birthstone Chart by Month

Read more…
Started by James McConnell in Spirituality In General, Channeling and Channeled Messages, and Ascension and Awakening
0 Replies
Views: 701

Read more…
Started by James McConnell in Spirituality In General, Channeling and Channeled Messages, and Ascension and Awakening
0 Replies
Views: 438