Trees are a living reminder of event beyond our comprehension. There is a mystery about such events that leads us to hold up the image of some trees as worthy of reverence, as witnesses to those happenings. To be able to touch and see such a trees is a powerful experience, unable to grasp the complexity of these feelings except admiration and superiority. Trees are guardians, living essence and life force of spiritual realm with the aura of power, which is visible to those who are in total balance and harmony. The lore, which surrounds a particular tree, often reflects the power the old ones sensed and drew from their presence. And here are such a trees: The Ancient Trees: 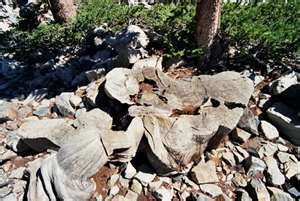 Prometheus - was the oldest known Great Basin Bristlecone Pine (Pinus longaeva) tree growing near the tree line on Wheeler Peak in eastern Nevada, United States. The tree, which was at least 4862 years old and possibly more than 5000 years, was cut down in 1964 by a graduate student and United States Forest Service personnel for research purposes. Prometheus was a living member of a population of bristlecone pine trees growing near the tree line on the lateral moraine of a former glacier on Wheeler Peak, in Great Basin National Park, eastern Nevada. Wheeler Peak is the highest mountain in the Snake Range, and the highest mountain entirely within the state of Nevada. The bristlecone pine population on this mountain is divided into at least two distinct sub-populations, one of which is accessible by a popular interpretive trail. Prometheus, however, grew in an area reachable only by off-trail hiking. In either 1958 or 1961, a group of naturalists who admired the grove in which the tree grew gave names to a number of the largest or most distinctive trees, including Prometheus. 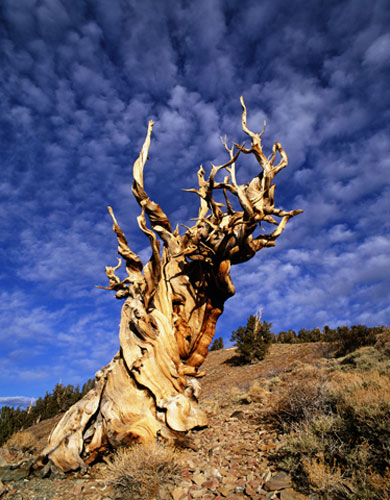 Methuselah -is a Great Basin Bristlecone Pine (Pinus longaeva) tree growing high in the White Mountains of Inyo County in eastern California. Its measured age of 4,842 years makes it the world's oldest known living tree. The ancient tree is named after Methuselah, a Biblical figure having the longest mentioned lifespan in the Bible of 969 years, its exact location remains a closely-held secret protected by the U.S. Forest Service. The picture is not an actual picture of Methuselah, but it likely looks very similar.

Among the White Mountain specimens, the oldest trees are found on north-facing slopes, with an average of 2,000 years, as compared to the 1,000 year average on the southern slopes. The climate and the durability of their wood can preserve them long after death, with dead trees as old as 7,000 years persisting next to live ones. 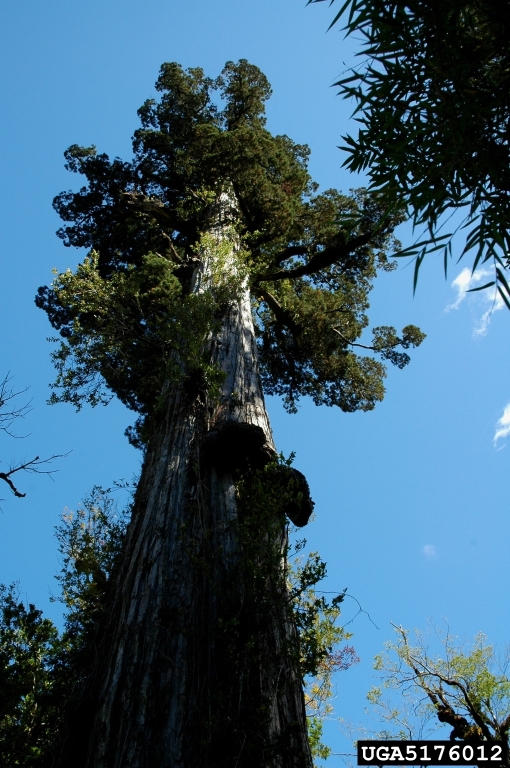 Alerce Tree: In 1993 scientists discovered this 150-foot tall Patagonian Cypress in the Andes Mountains of Chile. Unlike the Llangernyw Yew and the Sarv-e Abarqu, Alerce has been given an exact age of 3,637 years old using tree-ring width chronology. This makes it the second oldest tree to have its exact age calculated. The Muir Snag - (giant sequoia tree) Thought to be the oldest giant sequoia, this now dead tree is still standing but only at 140 feet (43 m) tall. It has a maximum base diameter of 35.9 feet (10.9 m) and before it died its perimeter could have been as much as 110 feet (34 m). This tree is thought to have been more than 3500 years old when it died. 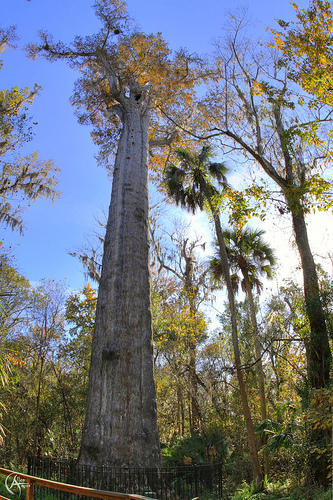 The Senator: This is a Bald Cypress located in Big Tree Park in Florida. It is estimated to be nearly 3,500 years old and was once used as a landmark by Seminole Indians and other local tribes. It also holds the title of biggest tree by volume east of the Mississippi. 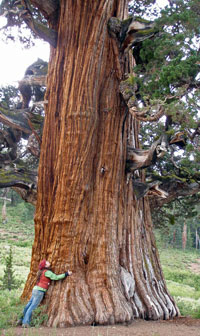 Juniperus Occidentalis - (Western Juniper and Sierra Juniper) is a shrub or tree native to the western United States, growing in mountains at altitudes of 800-3,000 m (rarely down to 100 m). The Bennett Juniper in the Stanislaus National Forest of California is considered the oldest and largest example at possibly 3000 years old, with a height of 26 m and a diameter of 3.88 m.

General Sherman This towering giant sequoia stretches 275 feet, about as tall as a 27-story high-rise building, and is 102.6 feet around. That makes it the largest (by volume) individual tree in the world. The general lives in the Sequoia National Park in California. Scientists believe this tree could be anywhere from 2,300 years old to 2,700 years old. 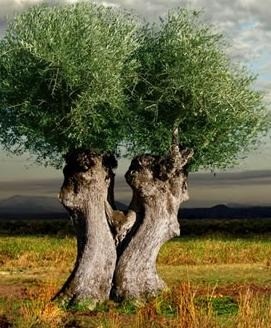 (note: not sure if it's the right picture) 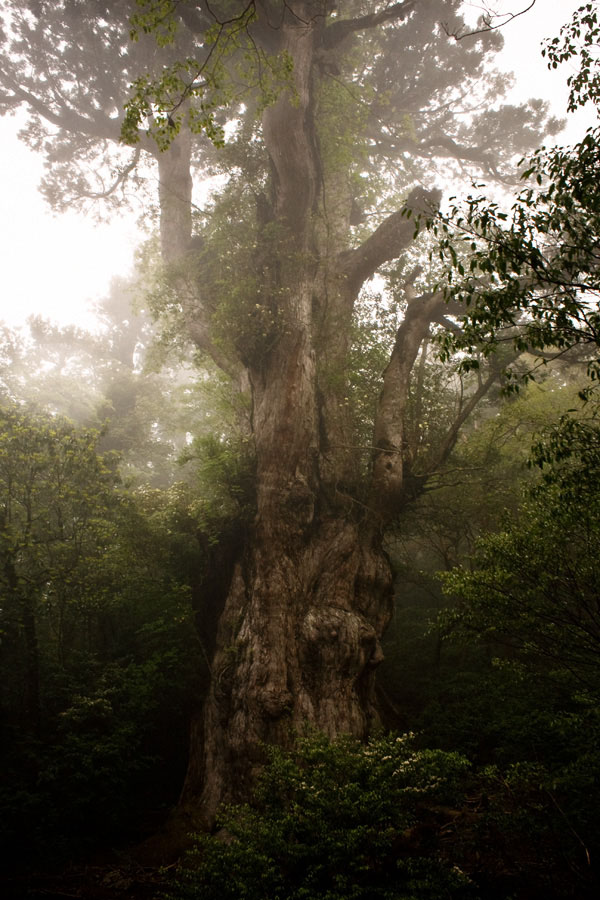 Jōmon Sugi This cryptomeria tree’s 83-foot height and 53-foot girth makes it the largest conifer in Japan. The tree grows in a misty, old-growth forest on the north face of the tallest mountain on Yakushima island in Japan. Tree rings indicate the venerable cryptomeria is at least 2,000 years old, though some estimate it could be as old as 7,000 years. Te Matua Ngahere This majestic Kauri tree is nestled in the last stretch of a primeval rainforest in Waipoua Forest, New Zealand. The tree is thought to be around 2,000 years old. With a 52.5-foot girth, Te Matua Ngahere is the fattest tree in New Zealand. The giant, whose name means “Father of the Forest” in Maori, was severely damaged in a storm in 2007. 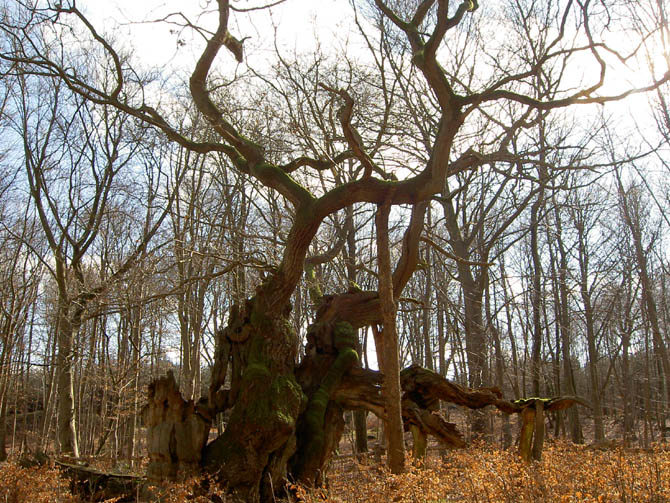 Kongeegen -This gnarled, ancient oak tree is set away in the Jægerspris North Forest in Denmark. Scientists estimate the “King Oak” is between 1,500 to 2,000 years old, making it a contender for the title of oldest individual tree in Northern Europe. Though it germinated in an open meadow, the trees growing around it are slowly closing in on the old oak and killing it. 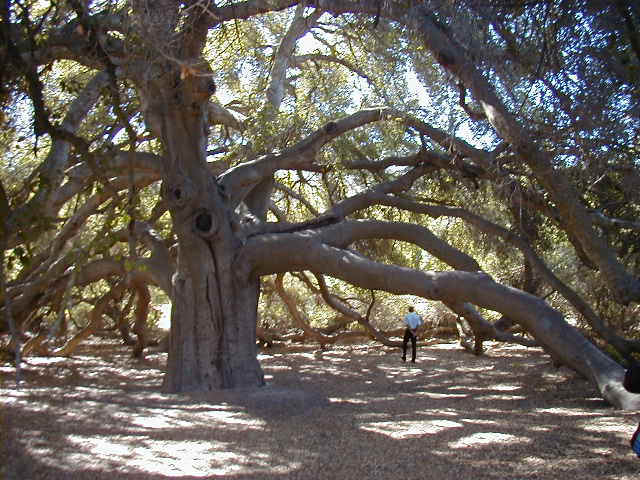 The Pechanga Great Oak Tree - The Great Oak is the largest natural-growing, indigenous coast live oak (Quercus agrifolia ) wi'aashal tree in the United States and is estimated to be 1,500 years old, making it one of the oldest oak trees in the world. The tree has been used by countless generations as a gathering place.

Pando tree - (Latin for "I spread", also known as The Trembling Giant) is a clonal colony of a single male Quaking Aspen (Populus tremuloides) located in the U.S. state of Utah, all determined to be part of a single living organism by identical genetic markers and one massive underground root system. The plant is estimated to weigh collectively 6,000,000 kg (6,600 short tons), making it the heaviest known organism. The root system of Pando is estimated to be among the oldest known living organisms in existence at 80,000 years of age.

Pando is located in the Fishlake National Forest, near Fish Lake on the Fish Lake Plateau located at the weste

Old Tjikko tree - is a 9,550 year old Norway Spruce tree, located on Fulufjället Mountain of Dalarna province in Sweden. Old Tjikko is the world's oldest living individual clonal tree, however, there are many examples of much older clonal colonies (multiple trees connected by a common root system), such as "Pando", estimated to be over 80,000 years old. The age of the tree was determined by carbon dating of the root system under the tree, not by dendrochronology, or counting tree rings. The trunk itself is estimated to be only a few hundred years old, but the tree as a whole may have survived for much longer due to a process known as layering (when a branch comes in contact with the ground, it sprouts a new root), or vegetative cloning (when the trunk dies but the root system is still alive, it may sprout a new trunk). 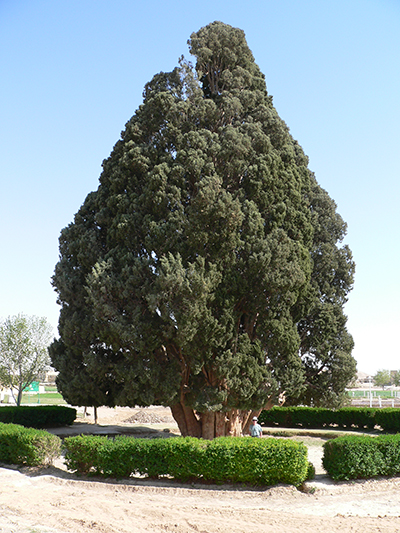 Sarv-e Abarqu: The “Cypress of Abarqu” is an ancient cypress tree located in Abarkooh, Iran. Also known as the Zoroastrian Sarv, this tree took root between 4,000 and 4,500 years ago, making it the oldest living organism in Asia. 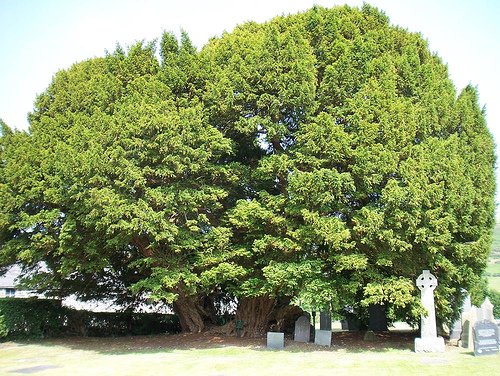 Llangernyw Yew: A rural, Welsh-speaking village in north Wales is the site of Llangernyw Yew, the world’s third oldest, non-clonal tree. Located in the graveyard of St. Digain’s parish church, among primitive stone crosses made during the Dark Ages, this mighty yew tree has stood here for nearly 4,000 years.

These are just a few the world's oldest trees. They stood and witness time and better part of our history. 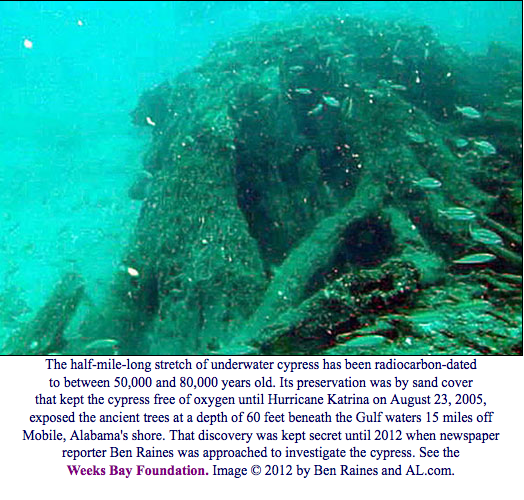 “These stumps are so big, they're upwards of two meters (6 feet) in diameter - the size of trucks. They probably contain thousands of growth rings.”-

This is The OLDEST/ANCIENT TREES EVER so far - and it seems that there are still alive  http://www.earthfiles.com/news.php?ID=2107&category=Environment

Meanwhile, the University of Southern Mississippi called me as well and offered to do a very thorough side scan sonar of the area so we could kind of determine the extent of the forest on the seafloor and that sonar shows it to be at least a half mile long.

IS IT TRUE THAT WHEN YOU CUT INTO ONE OF THESE UNDERWATER CYPRESS TREES THAT ARE SIXTY FEET DOWN NOW OFF THE ALABAMA COAST, THAT IT SMELLED FRESH TO YOU?

It's the neatest thing in the world! You get the stumps up on dry land and cut them with a saw and you smell that fresh cut wood smell with sap and everything. In some of the photographs from LSU, you can see the sap leaking out of the wood just as you would see with a fresh piece you had cut today.

"As if they can do anything about it! Ridiculous, this so-called dark silk!
https://youtu.be/AT1aONozNj0"

"The moon has risen,
The golden little stars shine
Bright and clear in the sky.
The forest stands black and silent,
And rises from the meadows
The white fog wonderful.

How is the world so quiet
And in the twilight shell
So trusting and so sweet
As a…"
More…
Loading ...