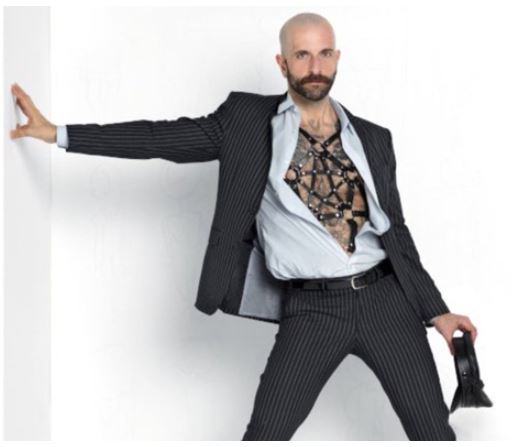 Daskalakis also serves as the director for HIV prevention at the Centers for Disease Control and Prevention (CDC). Prior to this, he served in the New York City Department of Health under former Mayor Bill de Blasio.

Daskalakis graduated from Columbia University with a biology degree. He later attended the New York University Grossman School of Medicine and did both his residency and fellowship at the Harvard Medical School. Daskalakis also gained an additional master’s degree in public health at the Harvard T.H. Chan School of Public Health.

Despite his excellent educational background and his efforts in HIV and other diseases affecting the LGBT community, a quick search of Daskalakis’ social media profiles showed disturbing information. These included his penchant for pentagrams and other symbols related to Satanism.

Daskalakis’ Facebook profile showed him alongside his partner Michael MacNeal at their “goth” gym in New York. It was based on the former gay nightclub Monster Cycle, which had taken over an old church in Manhattan. The establishment’s social media posts were rife with references to Satanism, the devil, burning crosses, pentagrams and more.

The newly-appointed monkeypox coordinator also sported tattoos reflecting the unholy. “I have learned there is light even in the darkest places,” said one of his tattoos. Other tattoos on Daskalakis showed the corpse of a dead creature, a serpent, a head with three eyes and what appears to be a saintlike figure or a depiction of Jesus Christ across his stomach.

His profile also showed images depicting an Ouija board ceremony with a lit crucifix depicting Jesus Christ, laying on a pentagram, among others.

Moreover, MacNeal and Daskalakis also appear to have been “married” in a dark and occult ceremony in 2013. Prior to meeting his partner, Daskalakis did not seem to have a penchant for the occult that he now publicly promotes.

Daskalakis has not addressed the speculation around his alleged religious beliefs or his public shirtless photos. Instead, he maintained his focus on dealing with the monkeypox outbreak.

Following his appointment, Daskalakis spoke about the importance of being aware of how monkeypox circulates among the LGBT community without linking it to identity. (Related: Monkeypox is a gay disease spread by seminal fluid, not merely skin contact, study finds.)

He also said the number of monkeypox infections appears to be “slowing down,” especially in major metropolitan areas. The new monkeypox czar attributed the decline to at-risk populations changing their sexual behaviors and lauded the success on the part of local health officials to vaccinate at-risk individuals.

Some conservatives expressed their opinions about Daskalakis and criticized Biden for his decision regarding the appointment.

Benny Johnson, host of “The Benny Report” on Newsmax, wrote on Twitter: “Meet Demetre Daskalakis. Demetre was just appointed by Joe Biden to be the official White House National Monkeypox Response Deputy Coordinator. Demetre proudly wears the official symbol of the Church of Satan: The Pentagram. Joe Biden appointed a Satanist to the White House.”

Johnson also noted that the Baphomet Pentagram is the official, copyrighted symbol of the Church of Satan and has long been associated with various occult beliefs, including Satanism, which reveres the accomplishments of humanity and encourages believers to embrace physical wants and desires.

“It’s ubiquitous in his social media. Demetre has Pentagram tattoos. So it’s a fair question: Did Joe Biden appoint a Satanist?” Johnson posited on his Twitter account.

The criticism from conservatives purportedly forced Daskalakis to turn his Instagram page private.