I've found this last month that star family have been decloaking their ships more often, a sign that another 'layer' of the collective veil has peeled away, whether people know it consciously or not.

I'm going to reproduce the whole of my current website post here, about a sighting last week while out walking (October 21, 2015) which was a reminder about why it's so important to still the mind chatter and detach filters that have accumulated.

Today I’d like to share a beautiful ship sighting from last Wednesday morning, while taking a 3km walk near my home along what was originally a train-line, now converted into a walking trail in the Perth hills. I always carry a pocket camera when out walking, ‘just in case’, and before setting out, wished for a clear view of a ship or two, as the walking trail has a big open sky panorama, and the sky that day was completely free of clouds or chemtrails. However, 7:30 to 8am turned out to be a busy time on a track that is pretty much deserted later in the day. At that early hour it’s quite a thoroughfare of schoolkids on bikes, a stream of dog walkers, joggers and pre-work cyclists, all focused on doing something, getting somewhere, watching the clock.

I gave up on seeing starships, and concentrated on the last of this Spring’s wildflowers, stoics still blooming after a week of temperatures over 30C, like this beautiful shrub covered in pink blossoms. 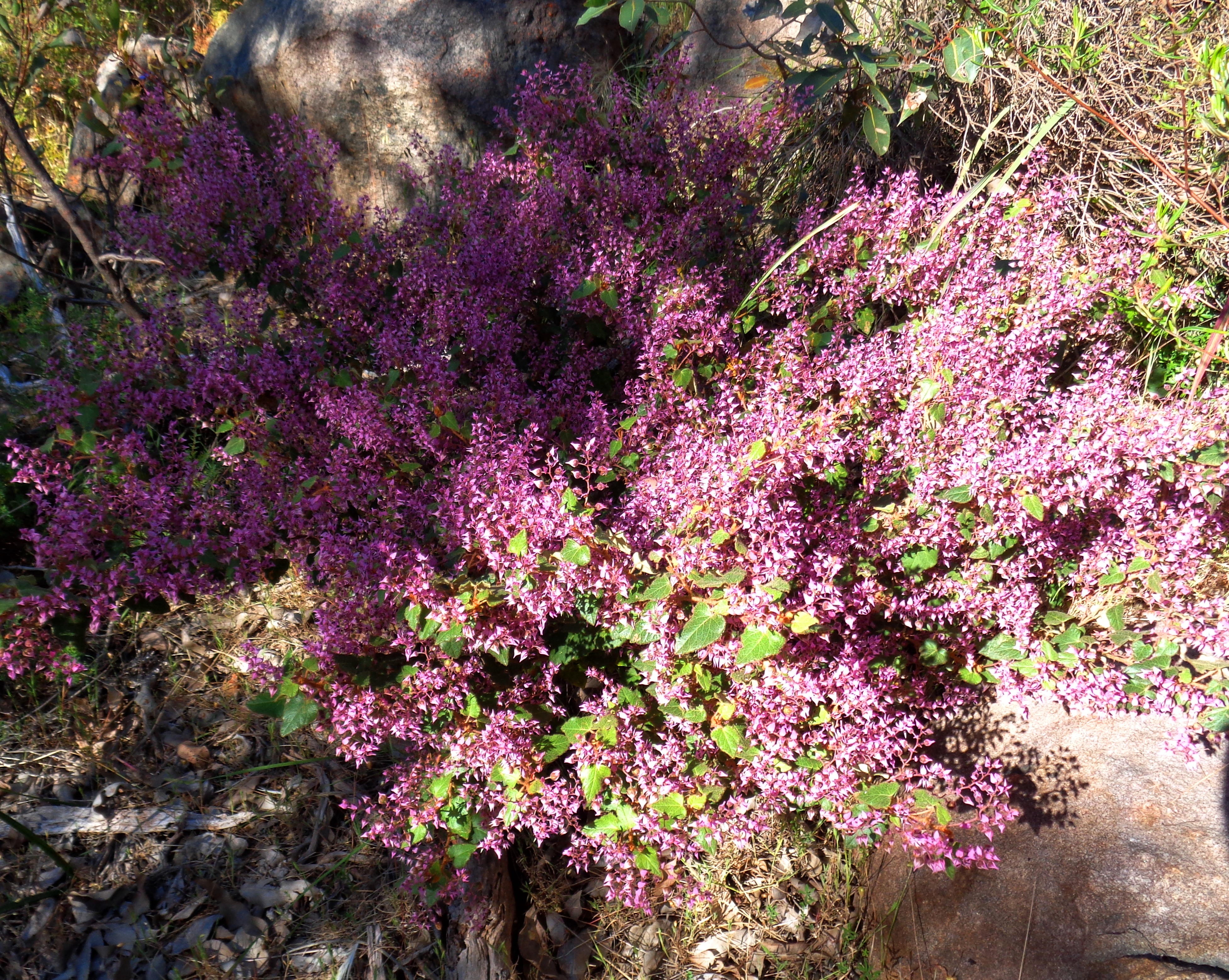 Then I heard a bird call, three short notes, and recognized it as the voice of a Butcherbird which Bareld and I had ‘met’ in July (while Bareld, my Twin Flame, was staying here for a month, from his home in the Netherlands). As we had walked along that same trail together, the Butcherbird flew beside us, alighting in one tree, then another, along the way, singing in its beautiful and distinctive ‘tone’. Here are a couple of the photos Bareld took of it. 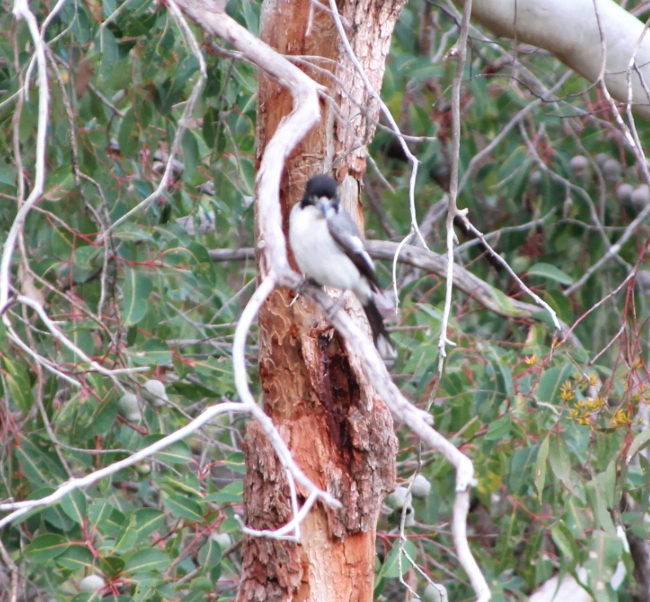 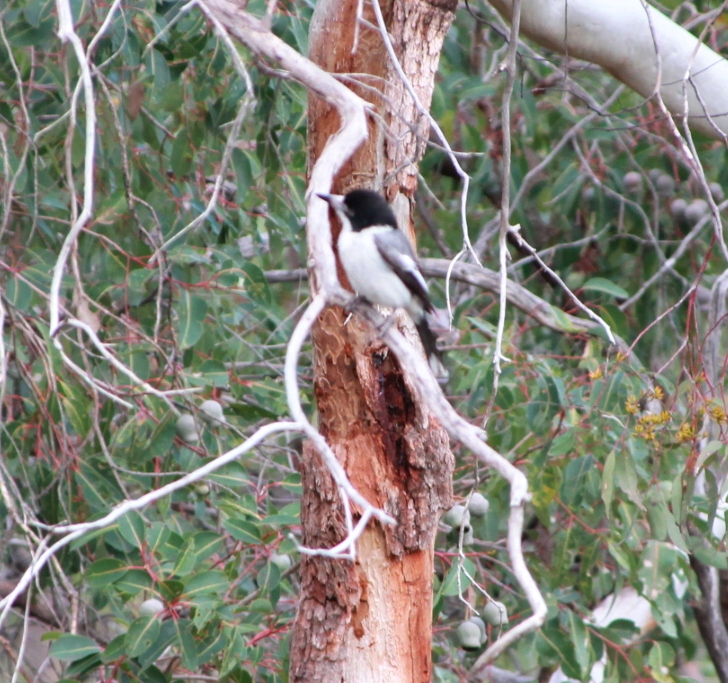 When walking along the trail these last few months, I had looked out for this bird, but never saw or heard it again, until last Wednesday. It called again, and I looked up to see it high in the branches of a bare tree. In the moment I lifted my camera to take a picture of it, a silver ship uncloaked above the tree for two seconds, then ‘disappeared’ again. 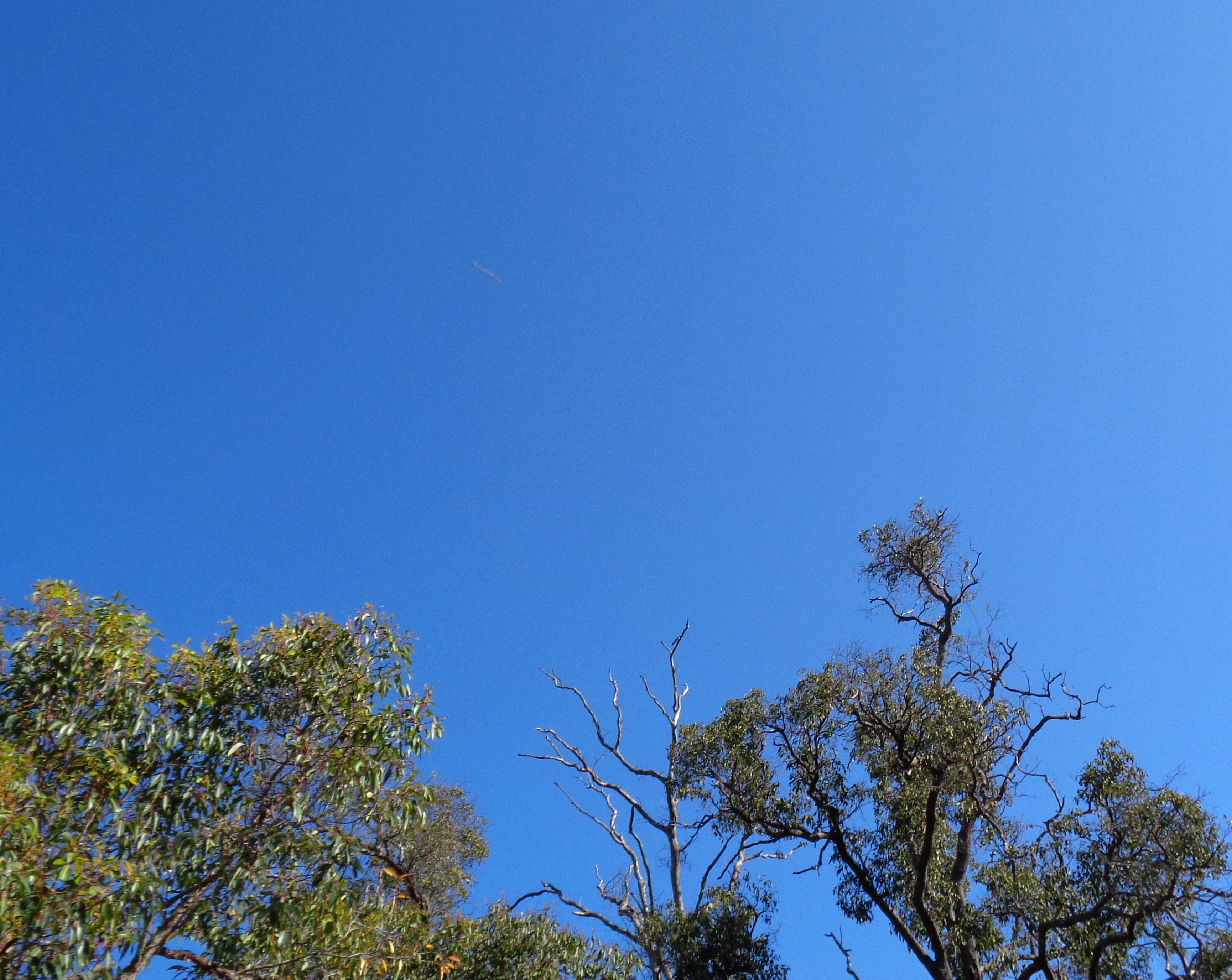 I only managed to capture it in a photo because of the Butcherbird’s ‘signal’ to look up to that spot, at that moment, and click the camera. Without its call, I might have walked by as oblivious as the 60 or so people on the trail that morning, because my mind had already said ‘there’s too much distraction, you probably won’t see a ship here/now’. 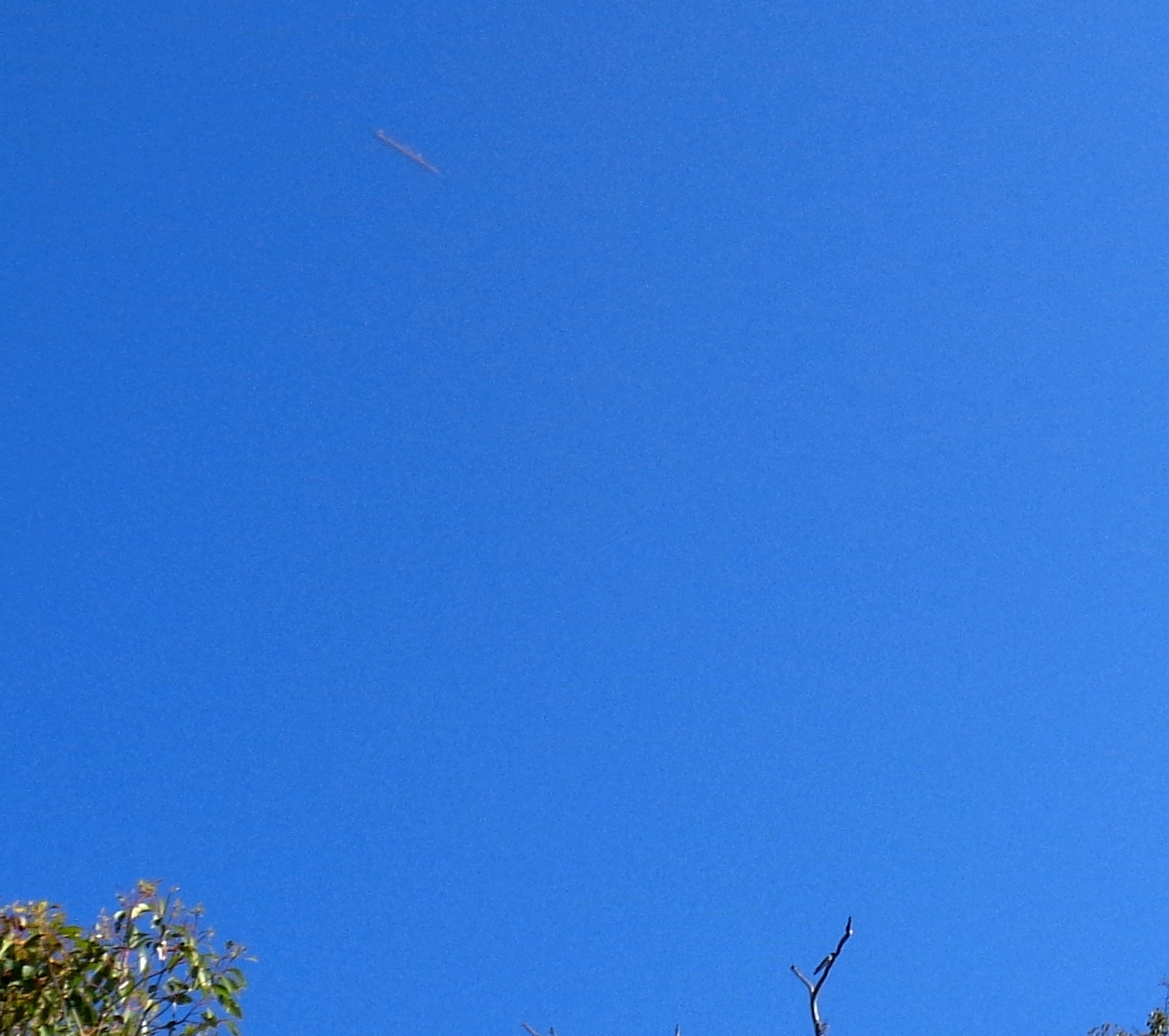 This perfect ‘signal’ was also a demonstration of how, even if the mind is ‘fluttering’ a bit, as long as the core of your consciousness, the major part of it, is anchored in stillness and peace in your inner heart, then you can still hear the universe’s little messages – that if your mind is too busy or has ‘told a story’ that will shutter your awareness momentarily, the open heart is always ready and alert to signals given by reflection into 3D, whether it’s in the call of a bird, the shape of a cloud, a song on the radio at a precise moment, it doesn’t matter what the form is, if you are a clear convergence point for universal Love, then Love will speak to you in whatever way will work best and to which you have an attunement, in that Now. For me on this occasion, it was deeply poignant to receive a signal via a bird that had especially caught my and Bareld’s attention on our first walk together in 3D physical. Can you feel the perfection at work? Nothing could have made me look up faster, in that place, at that moment, than the call of that bird…. 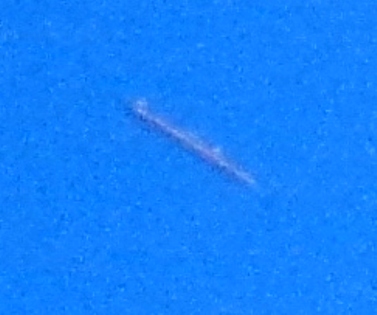 A little bit about the ship now. As you can see in the close-up, the ship looks long and narrow, with two rounded or slightly triangular parts or objects on top of it, and a slight dome on the upper middle of the craft. I asked about the two rounded shapes, and Arnap (captain of the Shem Arua) answered me, actually to see the ship in my inner vision as a disc, with a shallow dome on the top centre of it, and that the two rounded shapes are the same type of little ‘pod’ craft that have flown many times close to my home. In this photo, they are ‘sitting’ on top of the flat part of the disc (magnetically). Arnap also stated that this ship ‘flies in the company of the Shem Arua‘. 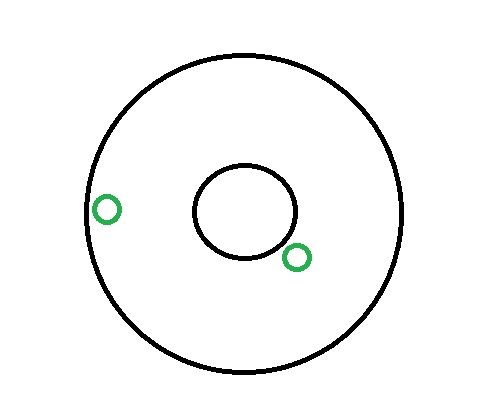 In the stillness of your presence, you can feel your own formless and timeless reality as the unmanifested life that animates your physical form. You can then feel the same life deep within every other human and every other creature. You look beyond the veil of form and separation. This is the realization of oneness. This is love.

And from Drunvalo Melchizedek (Living in the Heart):

You are more than a human being, much more. For within your heart is a place, a sacred place where the world can literally be remade through conscious co-creation.

When you live in your heart, that sacred place within it, where you touch, feel and know the divine spark that you are, beyond the play of forms, and let yourself fill with that spark, so that you see and feel through its Being-as-one-with-the-Whole, the veil of separation melts away. You see and feel the pure creative energy in everything – whether seemingly ‘solid’ or of more subtle flows – and the connections of everything. You can see and feel exactly the qualities of the light expressing in everything around and within you. As we focus, so we become. As we emit, so we attract. Living in the heart renews our original inner sense, the wise and playful child of Source that we are. So when/if you find your mind ‘nudging in’ to run the show, stop and breathe, gently refocus in your heart centrepoint and…smile. Smile deeply, into your heart. Feel that smile swell in your heart, like an unstoppable wave of golden laughing light, that fills you with the Sun you are, the Star in your Heart radiating outward, to all…

Love to you all, to our star brothers and sisters, inner earth families, Gaia’s elementals, the dolphin and whale beings, the Galactic Councils, and all committed to renewing Love on Earth.