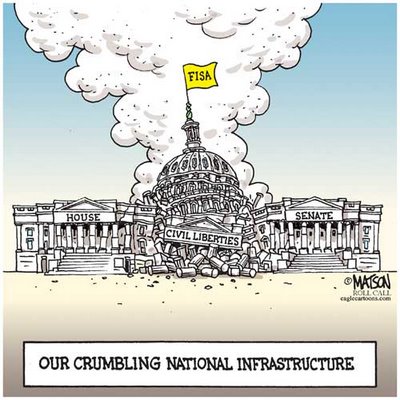 We’re talking about people marching on the White House and throwing them out on their ass. Either way, if Fast and Furious is to break out completely against this White House, it needs to happen soon, so we will have our answer either way.

Regarding the dynamics of the White House at this time it is same as it ever was which is batsh-t crazy 24/7 in there.  There was an episode involving the First Lady and a member of her staff that shook up everyone. It was a big enough deal it reached folks in Congress, who forwarded it on to some donors, who then had calls into Plouffe’s office wondering WTF was going on.  The First Lady is being prepped as one of the few assets for the re-election campaign but those inside know she is as big a potential liability as anything associated with the administration.  They are using her in controlled environments only.  That’s the word from on high.  What went down between her and the staff member wasn’t just a tantrum, or some shouting.  It was put to me as being “an eruption”.  Talking full on screaming here.  Not the first time this kind of thing has happened. I’ve shared a bit of that w/you before but this was on another scale apparently.  Put the WH on security alert for a brief time.  It was that bad.  No mention of the president’s involvement or reaction.  He was apparently AWOL during the whole thing.  First Lady is complaining a lot these days.  LOUDLY. To everyone.  Apparently a very unhappy woman.

As for the president, he is simply seeking guidance. Any guidance.  His moods are becoming more and more withdrawn once he leaves whatever stage they send him to.  Here’s a description that came my way last week you might find interesting:

“President Obama finished the speech, walked off the stage, was escorted to the back corridor where he collapsed into a seat against the wall.  Both hands went to each side of his head which was leaning down almost between his knees. You could see marks on the sides of his face where the stage makeup had been rubbed off by his hands. He wears that stuff everywhere these days.  A staffer walked up and leaned over the president and told him it was time to go.  The president looked up, gave a little smile, and got to his feet slowly. Very slowly.  The only word he said was “Yeah.”  There was no excitement. No energy from him.  The people around the president seemed to ignore his condition.  They looked right through him until he started walking down the hallway toward the outside.  They followed alongside him and seemed to kind of push him out the door.  The president looked incredibly tired.  Used up.”

That’s the dynamics of this White House.  They are crumbling in amongst themselves.

The donors, as I have been repeating to you for months, are getting more agitated and concerned each day.  The president is being cornered and he doesn’t appear to have much fight left in him.  Don’t take that as me being confident though.  That makes him more dangerous than ever.  He still has his hardliners around him.  They will not give this up.  Jarrett will break him apart if needed.  Too much money on the line.  They owe people. Pulling the plug is not an option for them.  And while we have been working up the primary challenge against the president in the fall, I am hearing those bastards have been attempting to install a 3rd candidate scenario to split the vote.  Not just idle talk, but actual negotiations having taken place.  If they pull that off, well, I don’t know.  We had not prepared for that scenario.  It’s a long shot for them, but it put a scare in me.  In all of us.  Let our guard down there.

More importantly at the moment though is Fast and Furious.  The Solyndra thing was an unexpected surprise.  Had nothing to do w/that but happy to see it out there.  If it continues to get attention from the public that’s great.  The more the merrier when it comes to scandals against this administration.  I continue to see Fast and Furious as the much bigger deal for this White House though.  That has everyone running interference at a level only seen when something very big and very dangerous to a president is hovering over an administration.  You keep asking about Issa.  At this point I don’t know.  Information has been effectively shut down from his office.  That either means a deal has been struck and some stooge will take the fall, or they are preparing to go all in on this thing.  A Watergate type moment.

At this point it’s one or the other.  Holder has openly insulated himself and the president.  Doing it so openly means he’s either very confident or very afraid.  I am hoping its fear that is motivating him to cover his tracks right in front of everyone.  Been told there is a memo, or was a memo, tying Fast and Furious directly to some kind of proposed gun control legislation or plan.  Not certain how developed it was.  Something that was pending .  The memo is a direct link between the program and the gun control issue. An entire coordinated effort that required people to be killed.  It is being talked about, but I have not seen it or spoken with anyone who has.  So who knows?  If it does exist and if Issa or someone comparable to him has it, then it implicates the administration at an entirely new level of corruption here.  We’re talking about people marching on the White House and throwing them out on their ass. Either way, if Fast and Furious is to break out completely against this White House, it needs to happen soon, so we will have our answer either way.

Will talk again.  Not sure how soon.

"And the truism of logical-intuition allows the initiate access to levels of mind that stretch far into the higher subplanes of the manasic...In effect, there are two aspects of mind, one being the higher intuitive, the other being the concrete…"

"This quote is excellent advice for any true initiate within the Spiritual Hierarchy.....Noting that one enters the Hierarchy at the 3rd degree initiation....Therefore one assumes a responsibility for good works, clear thoughts and pure deeds, based…"

"You're most welcome and this morning the Count has confirmed that you are with Master Kuthumi's ashram and have a 2-ray soul, that of Love-Wisdom...
He also reaffirmed that Ivy is in the same ashram and reassures you both that it is one of the…"

"Now, there are those who say 'parasite' proper must live inside the host, without killing the host. But still some people, me included, do not see two connected objects as two different objects at all. Thus 'parasite-host' dichotomy is also mistaken…"

"I know exactly what you mean ET Hugger, I had "Matura" in a technical school and I am also brain oriented but I know exactly what I feel but I feel everything and can't control it, I call it logical-intuition LOL
that's why I tend to focus on world…"

"When a reptile suckles a cow etc, we laugh off and call them 'parasites'. When human milk cows, we call it 'dairy farming' and boast about how good we are in the job! Whats the difference? Ticks suck cows, we use their skins for bags, shoes and…"

"Quote:
"I find your comparison very inappropriate, because a parasite behaves differently. It's not quite like you say. People live on earth and make a living from what there is to eat here. They don't make the earth sick because they eat"