0
by April Bender (via integrated Overself) 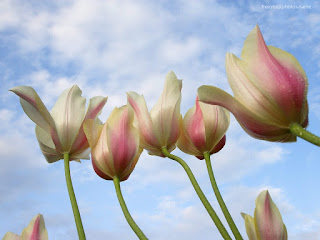 As with each potent energy induction/portal, there is first a contraction and then a release. This latest energetic release was tremendous indeed and brought with it the arrival of a most precious gift to your overall experience of this planetary realm, the permeation of the newly ascended Divine Feminine energy!
For the glorious Bride (Gaia/Sophia/World Soul) has been painstakingly prepared, awakened, has just ascended, and now eagerly awaits the arrival of the Bridegroom (Christ consciousness/Creator Son aspect) and the great wedding feast (union) that is yet to come.
This most certainly would not have been possible if it were not for the numerous and steadfast acts of courage, faith, love, devotion, persistent hard work and midwifing by the many master's, lightworkers, wayshowers, and other contributor's to the ascension process of this local system – who so lovingly committed their time, energies, self-actualization (LBP) processes, visualizations, affirmations, and prayers throughout the many years and the many incarnations leading up to this miraculous and long ago foretold event.
This event by its very nature, implies that a crucial tipping point has been reached along the collective path of planetary ascension. The new planetary chakra system composed of elements from both the divine blueprint for humanity and the divine blueprint of Earth/Gaia, continues to become charged and activated – as both Gaia and humanity deepen into the culmination of their ascension processes. For the ascent of the Divine Feminine in her full glory, heralds the rise in the collective consciousness of the planet to such a degree that it catalyzes the reclamation, healing, and awakening of the great ministering spirit known as the World Soul.
The World Soul is a collective entity consciousness made up of an aspect of the Divine Feminine as well as the consciousness of all the actualized souls residing upon Earth linked together within the collective higher mind and now collective heart center, (think spiritual partnerships and mass global meditations) – of which there are now enough of these individual souls linked together in unity of intent for this World Soul entity to awaken, actualize and begin to evolve – in stages.
So now the collective higher mind (third-eye and crown) and the collective heart chakras have now activated and are moving into greater alignment. The next centers to awaken will be both the collective throat chakra and the collective solar plexus, as the populace of actualized souls on the planet grows – and begins to stand firmly united in their sense of oneness, empowerment, divine truth and justice (for the Greater Good) and demands with every fiber of their being a higher planetary experience for All.
I know there is a great deal to unpack here within the three main concepts I've mentioned:
In many ways it is the realization/actualization of the Divine Trinity as manifest on Earth. It is the divine marriage between Heaven and Earth actualized. It is the return of the child back into the Kingdom of God. For others, it is the long awaited healing and re-enchantment of the world and the restoration of their magickal selves. No matter how it has been articulated across space, time, cultures and traditions, what I speak of is the same – a return Home, to a greater sense of wonder, oneness and love.
We will attempt to unpack all of this in the days and weeks to come but for now rest in the greater sense of joy, expansion, love, and peace that these newly arisen Divine Feminine energies bring. Enjoy them, get to know the various aspects of them, as you let the Divine Feminine energies saturating the air around you, the earth below you, and the breath within you co-mingle with the Christ/unity consciousness energies already residing within and around you. Allow yourself a moment of deep satisfaction for a job well done.
Until next time...
Source: http//www.aprilsairings.blogspot.com
See also - One Heart, One Mind, One Body message from the Divine Mother. Channeled as a companion piece to this message.
Views: 105
Tags: 5d, age, ascension, mysticism, new, spirituality, starseed
E-mail me when people leave their comments –
Follow

"I think we need a new theory of gravity to explain this dazzling cosmic web. Preferably, gravity not as a 'monopoler', but di-poler or even tri-poler etc. Preferably, this theory should do away with any need for 'dark matter'…"
More…
Loading ...