The Bermuda Triangle: mysterious, unworldly, sometimes deadly. For decades intrepid researchers delved into the maze of mysteries hidden deep within this most enigmatic place on Earth.

Some speculate the bizarre time anomalies, disappearances and weird phenomena can be explained by natural occurences. Others are insistent that relics of an advanced, unknown culture left behind fantastic technology…great energy machines that literally warp spacetime and open portals to other realities. 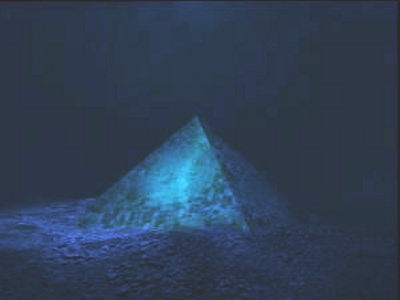 Now American and French explorers have made a monumental discovery: a partially translucent, crystal-like pyramid rising from the Caribbean seabed— its origin, age and purpose completely unknown.

A gigantic structure, perhaps larger than the Great Pyramid of Cheops in Egypt, and initially identified by a doctor in the 1960s, has been independently verified by diving teams from France and the U.S.

The discovery has rocked scientists around the world. Will they rush to investigate it? No, they’re more likely to studiously ignore it. If pressed, they’ll officially position themselves as highly skeptical—especially in light of the potential ramifications.

The pyramid could confirm some engineers’ contentions that pyramids were originally created as massive power sources, support the claim that the ancient city-state of Atlantis did exist, or even provide answers to the mysterious goings-on that have been recorded since the 19th Century in the region of the Atlantic dubbed the Bermuda Triangle.

According to the history, the pyramid was accidentally discovered during 1968 by a doctor of naturopathy, Ray Brown of Mesa, Arizona.

Brown was in the Caribbean on vacation and making dives with friends in a region off the Bahamas known as “the Tongue of the Ocean.” The area acquired that name because a tongue-shaped portion of the seabed extends out from the island before sharply dropping off into much greater depths.

When relating his discovery, the doctor explained he became separated from his diving friends underwater. While attempting to rejoin them he came upon a massive structure rising from the ocean floor: a black, hulking object silhouetted against the lighter sun-filtered water. The object was shaped like a pyramid.

Because he was low on air, he didn’t spend much time investigating the pyramid, but did find a strange crystal sphere.

Images of 3 pyramids can be seen in Brown’s crystal

He brought it to the surface with him and later when the ancient crystal was studied researchers were astonished by its properties.

Is the crystal pyramid causing the Triangle phenomena?

Some Triangle researchers have theorized for years that a strange energy source exists at the bottom of the sea within the region of the ocean affecting planes, ships, and boats.

A few investigators postulate that if the fabled Atlantis really did exist the remains of its mythical energy-vortex machine might still be intact at the bottom of the ocean. Such a machine, they claim, would likely be pyramidal-shaped and the original historical template that succeeding cultures around the globe copied much later.

Mysterious pyramids scattered across the world

Pyramid structures have been discovered across North, Central, and South America; Eastern Europe; the icy tundra of Siberia; Northern and Central China; and possibly Antarctica. The South Pole pyramid cannot be confirmed as it’s deep under more than a mile of ice and images of it are controversial.

Years ago, mysterious ruins—the vestiges of an unknown culture—were discovered on a small island called Malden in the middle of the Pacific Ocean. The ruins were claimed to also have the remains of an ancient pyramid.

Enigmatic Pacific Island Malden in the middle of nowhere

Believers in the ancient land of Lemuria (also called Mu) proposed that the ruins might be all that were left of that ancient land, while others speculated it might have been an outpost colony of Atlantis.

An anthropologist from the Bishop Museum in Honolulu, Hawaii explored the ruins back in 1924 and found no pyramid. What scientist Kenneth Emory did find, however, was evidence that a small Polynesian tribe once settled there briefly, perhaps no further back in time than the 16th Century.

Despite that finding, more revelations were to come from the tiny island during the ensuing years.

Reporting on some of Williamson’s amazing findings, Rich Hoffman, explorer and investigator, writes: “There are 40 stone temples on Malden Island that are described as similar in design to the buildings of Nan Madol on Pohnpei, some 3,400 miles (5,475 km) away. In fact, there is a basalt road that runs along the bottom of the Pacific Ocean which connects these islands under hundreds of feet of water.

“This suggests a culture that is more than 50,000 years old and that this entire land mass was once above water supporting a civilization that had no trouble moving around tremendous stones to build very large, complicated societies which we know absolutely nothing about, other than the fact that someone built them and they are older than biblical history.

“Yet, nobody discusses them because they don’t fit into our understanding of the human race and their origins. Scientists have their diffusion theories of how migrants arrived in North America using the land bridge of the Bering Straight and they are sticking with it.”

The same can be said of the scattered ruins of the Caribbean that suggest a very large civilization extending from the coastal waters off the Florida Keys, toward the Bahamian waters, crossing near Bimini, and east into the Atlantic.

Cuba too has underwater ruins off its coast that may have been part of the same city-state complex.

Hoffman also mentions, almost in passing, the incredible report of explorer Tony Benik who made the momentous discovery of yet another huge pyramid under 10,000 feet of water in the middle of the Atlantic.

The pyramid, Benik claims, is capped with a huge crystal.

And if that’s not enough, Hoffman shares the discovery of the Ari Marshall expedition in 1977. The team discovered a smaller pyramid off Cay Sal in the Bahamas. Marshall snapped underwater photos of the pyramid that’s submerged beneath 150 feet of water.

According to Marshall’s account the mystery pyramid glows. He also reported the water around the pyramid was luminescent and glistening white water flowed out of openings in the pyramid.

Despite the water at that depth being dark (not much light reaches that far down), the water surrounding the amazing pyramid was lit by the glow from the structure and appeared like a phosphoresent green color.

No follow-up exploration has ever been done of the find.

Did Atlantis really exist? Is Plato’s description the only history left of the—perhaps—mythical land?

For an answer, Hoffman turns to the story of the amateur archaelogist who discovered the legendary city of Troy, Heinrich Schliemann: “The man who found and excavated the famous ruins of Troy (which historians thought was only a legend), reportedly left a written account of his discovery of a vase with a metal unknown to scientists who examined it, in the famous Priam Treasure. Inside it are glyphs in Phoenician stating that it was from King Chronos of Atlantis. Identical pottery was found in Tiajuanaco, Bolivia.”

If Atlantis did exist, it probably existed during the end of the last Ice Age. The story of its sinking relates to the massive floods and rising ocean when the oversized Arctic icecap suddenly receded with catastrophic results for much of the Northern Hemisphere.

At the end of last Ice Age sea levels were nearly 400 feet lower than present day levels. Once the waters began to rise, they rose swiftly. Conceivably, no technology then, or now, could have saved Atlantis from its watery grave.

Some theories of Atlantis propose the island city’s power pyramids were made of crystal, or their tops were capped with a crystalline substance.

Could such a thing actually generate, store, and distribute energy on demand?

Experimenters discovered decades ago that pyramids do tend to act in some ways like a natural electrical capacitor gathering and storing energy around them. The larger the pyramid, the greater the capacity of gathering and storing energy. A pyramid’s composition is important too. Having one made of crystal, or an apex made of crystal, could vastly increase its power.

Crystal has long been known to have energy applications and exhibits natural piezoelectrical properties.

Early radio used germanium crystals to capture the radiowaves and convert them into electrical signals that could be processed and broadcast through headphones into soundwaves duplicating the human voice, music, and other sounds.

Pyramid power, say investigators, is intrinsic to the pyramid shape. It’s an architecture that’s proven to function as an energy accumulator and amplifier of energetic force.

As if to prove the investigators’ assertions true, recently some of the worlds pyramids began discharging beams of raw energy into space. [See: World's Pyramids Beaming Energy]

The bottom line? Pyramids are intrinsically natural generators of power.

We should ask ourselves why are they coming alive?

Pyramids and the ‘Cavity Structural Effect’

Carter explains that “Grebennikov also claimed that he could feel energies emitting from the apex of a pyramid: ‘You will soon pick up an active zone, a “clot”, where the Egyptians had their tombs. Another active zone (a “flame”) above the top of the pyramid is also well-perceived by the indicator if you drag its end over the top. The “clot” and the “flame” are well-felt by the finger inserted into the pyramid, or your palm moved above it after some practice. The pyramid effect, which generated many scary and mysterious stories over the centuries, is one of the CSE manifestations.’”

Another deadly phenomenon pyramids may create: an energy vortex

Besides the time and spatial anomalies reported in the Triangle, some survivors of terrifing incidents there have reported huge, swirling vortices suddenly appearing and disappearing .

Evidence exists that some missing ships may have gone missing because of this phenomenon.

Observations of some of the submerged pyramids reveals they sporadically generate intense vortices in the ocean water flowing around them. Those vortices may be caused by a discharge of internal energy.

If those submerged pyramids also discharge massive enegy through their apexes, that could account for the formation of deadly vortices on the surface of the sea that swallows up whole ships along with their doomed crews.

Future expeditions to these mysterious pyramids may finally uncover the truth and reveal amazing ancient technology.

Unfortunately, deep sea archaeology is very expensive and not well-funded. Most dives are to ancient wrecks that promise riches to risk-taking treasure hunters.

And, of course, the world’s universities are not especially eager to explore the idea that very ancient ruins containing high technology may exist that challenges virtually all of the foundations of their pet theories.