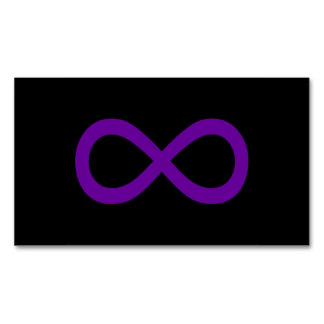 Okay, I've been scouring the internet for a bit, now. I started seeing this bright purple symbol (no, no it's not when my eyes are closed or when I am doing a meditation-I don't do "meditations") usually at night but many times during the day as well. It is right in front of my face, BRIGHT PURPLE and it is a figure 8 sideways. I see it every single night, sometimes all night. It's static in my vision, just walking around, working, sitting, whatever. It's there. No, I am not diseased...I am not sick and I don't need vitamins.

This has been going on for months. My TF mentioned that it happened around the time our planet passed through that purple thing or whatever but I'm not sure it connects to that at all. Anyways, purple is my favorite color. But yeah. Totally weird. Not that this has anything to do with it, either but he said he saw a grey alien watching me sleep around the same time...I never saw it but a flipping space ship followed me down the road at night when I was taking a walk on an empty street around the time the alien showed up and the purple lemniscate appeared. The ship was doing all these strange things in the sky with 90 degree turns and trying to get my attention and showing off. I've never felt so small...nearly died of a heart attack when it came so close. The ship was hiding behind the misty clouds but it was huge-it could have housed thousands of people at least...why am I talking about this when I am supposed to be talking about the purple symbol?

So, I noticed that I see it when I am experiencing some form of higher thought. I did some reading about the meaning behind the infinity symbol, the lemniscate and of course, we all know that a helix is. When I saw the helix on the side of this site I thought-"hey! why don't you put this out there-maybe someone else will have had the same/similar experience to share!" Cool.

So, I am a Pleiadian starseed in a body born of Pleiadian, Reptilian and Sirian bloodlines. I was reading some posts by some Sirian starseeds a few weeks ago and FINALLY I found someone saying they saw the same symbol but that their's was red. She said her mentor told her it was a possibly a sign of ranking but for me it feels like something I am perhaps tapping into. I finally made an account with starseeds.net even though I am just too anti-social for these sites. I really hate talking about myself or talking to people at all, anymore. It just upsets me at this time in my life because it feels wrong to have any social interaction with anyone. Not really into these starseed sites for some reason. Just prefer to watch so deciding to write here was not easy to do but this symbol topic is of real intrigue. I am planning on talking to that chick who says she sees the red one. I am just so sensitive to energies anymore that any connection prove too much. Anyone else see this symbol? If you see it in a meditation that's cool, too but what I'm talking about here isn't visualization. I'm talking it just turns on like a iridescent colored purple thing right in front of your face at night like clockwork and no one else can see it but you can see it overlaying other objects around you. I didn't ask to see it or understand it consciously for a long time.

I think I understand it more as time goes by. It also morphs sometimes where I only see half of it or where it gets smaller, bigger or fades in and out. It's wild, really if I stop to think about it. I guess I'm just used to it. I don't talk about it much because no one will know what I'm talking about and it's not really that interesting.

The symbol does seem to come about when I am on guard in some way, wanting to protect myself or others or having crystal clear, lucid thoughts that seem to pour in from nowhere at all as though they were even purer than first thoughts-more like pure information or knowing. Hmm. Hard to explain the place I am at mentally/emotionally/spiritually when the symbol appears but it is a specific state. I think it was always so much a part of me that seeing the symbol did not seem to correspond with a certain state since that state of awareness does tend to be a big part of my life, anyways. I notice it tends to fade out more if I am in this state, less. I wonder, will I see more symbols like this one? Remember, this looks just as tangible as anything else in the room. Also think it's funny that I don't see it nearly as much during the day! Maybe it goes to show I am more powered up at night. I do tend to be a night owl and get more of my best work (spiritual, mental and practical) done at night.

Something I have started to see over the past few weeks have been purple stars. They are made from the same material as the purple helix thing. Sometimes I see a lot, sometimes I see only one. It is strange. So the purple infinity/helix/lemniscate thing and now months later the purple stars show up. They are small, super bright and strangely glowing like the symbol and they are tiny like the stars in the sky.

I don't do drugs, drink or get high in any way. It sounds a little trippy and it is but I know it signifies something deeper in my life. I thought it might go away and just ignored it for a few months but see it is here to stay and will become more of a manifestation in my life.

Here are some meanings behind this symbol (s)

From a site about jewelry:

Infinity jewelry is an extremely popular fashion trend today. Many people enjoy adding an infinity necklace or an infinity bracelet to their daily ensemble. The meaning behind an infinity necklace is actually quite beautiful – it symbolizes eternity, empowerment, and everlasting love. To anyone, the infinity symbol can mean different things. For example, popular beauty company Avon partnered with the United Nations Development Fund for Women to create jewelry featuring the infinity symbol to portray women’s empowerment and raise awareness of violence against women.

This simple image, which looks like the number 8 turned on its side, is actually known as the Lemniscate, which means “ribbon.” It was first introduced during the seventeenth century by John Wallis, an English mathematician who wanted to create a symbol to represent the idea of infinity – a sum that is larger than any number that can ever be created.

In Tarot cards, the infinity symbol can be seen on the Magician Card representing infinite possibility and power. Lastly, the Ouroborus, part of ancient Egyptian culture, designated as a snake biting its own tail, represents in the relation between beginnings and endings – one cannot exist without the other, creating an everlasting circle.

Often the simplest symbols are the ones with the richest meanings. The infinity sign, the figure of eight, and the mathematical lemniscate all refer to the same shape that contains a wealth of complex meaning within its fluid lines. This mysterious symbol is found on an everyday object, the camera, where it appears as the infinity lens focus.
As a mathematical device, the infinity sign was first "discovered" in 1655 by John Wallis, but its significance as a religious symbol is much older. The infinity sign has its origins in the Arabic numerals that actually came from India in the first place. The sign can be drawn in one continuous movement, making a seesaw movement of clockwise and counterclockwise loops. These loops reflect the balance of opposites; male and female,day and night,dark and light.
Because the circles of the lemniscate sit side by side, the sign implies equality between these opposing forces, with the connecting point in the center the convergent point. The sign epitomizes the idea of sex-ual union and of "two becoming one." The infinity sign stands for wholeness and completion. 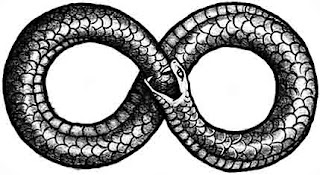 The lemniscate appears in the elaborate curlicues in Arabic calligraphic renderings of the Name of God; the elegant loops providing a decorative device as well as pointing toward the idea of eternity.
The symbol appears in the Tarot, as part of the Magician card. In the Pamela Colman/Rider Waite version, the magician has the lemniscate floating boldly above his head; in other decks, the brim of his hat conceals the shape. 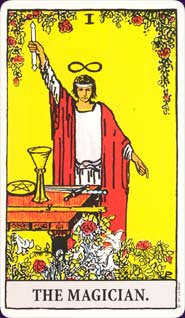 It has Egyptian and Grecian roots as well and is sometimes depicted as a snake eating itself. A silver snake eating itself ring was given to me as a present one time. I found it a bit odd but wore it anyways until it broke. When I was a child I always weirded out my mom by watching Greece and Egypt documentaries and bringing home huge stacks of library books about their architecture, burial methods, culture, gods and lifestyle, pyramids, myths, etc. To me none of it seemed strange.
Views: 1016
Tags: 8, figure, geometry, helix, infinity, lemniscate, meditation, purple, sacred, symbol
E-mail me when people leave their comments –
Follow

"I just love it when a divine Plan comes together....This is just what the Sirians had hoped for...You wonderful people pondering, intuiting, thinking, upon the topic of the devas...The very form builders and vivifiers (enliveners) of matter, on ALL…"

"I just love it when a divine Plan comes together....This is just what the Sirians had hoped for...You wonderful people pondering, intuiting, thinking, upon the topic of the devas...The very form builders and vivifiers (enliveners) of matter, on ALL…"

"I think I understand the difference now. Devas, angels and Elohim are beings that don’t live in the same ‘universe’ as humans and ETs. This parallel universe isn’t the same as the astral world or another dimension, is that…"

"It is important that we understand and know that we are not alone in the universe. We have Brothers and Sisters out there. The Word Alien is really mean. I woud never call anyone a Alien.
Today i wake up with this Song in my Head, wich i dream…"

"I always believed in ‘fairies’. They are probably smaller devas that maintain the energy of plants and trees? What about ‘orbs’, are these devas too?

I think I understand the difference now. Devas, angels and Elohim are beings that don’t live in…"
More…
Loading ...