(Stillness in the Storm Editor) Benjamin Fulford’s report from January 3rd, 2021 has been updated. Click here to read the full report. This post serves as a notice that the original has been updated. Scroll down to where it says:

An MI6 source who personally knows Blair –and says he is not a very nice person- claims he was rewarded for helping dismantle the German fourth Reich. Remember, 911 was a Nazi Reichstag fire that led to the US becoming a fascist state. Thanks in part to the secret testimony by Blair, the Bush family was executed for treason while the German Pope Ratzinger and Angela Hitler (Merkel) were removed from power. The Nazi infiltrators of the top ranks of the British bureaucracy were also removed -paving the way for Brexit.

Now Betty White -another top Satanist- has been permanently removed from this earth. 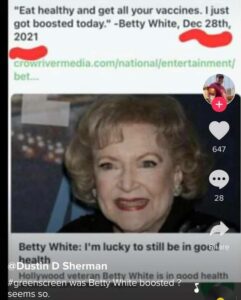 Here is a bullet point summary sent by the CIA:

The Bush’s created the OSS/CIA and

Barbara Bush and Betty White are the daughters of Aleister Crowley

Barbara handled all the politicians for the CIA

Betty handled Hollywood for the CIA.

QUEEN of Hollywood and the CIA’s

Here is a quote to remember White by: When asked what age she started driving, without skipping a beat, she said, “I think I was 4. No, no, no. That was something else! That’s when I lost my virginity!”

“This is what Hollywood does to mitigate and obfuscate the truth in plain sight…they turn it into a public joke to mock us. Just like Ellen Degeneres did at the Oscars when she ordered a bunch of pizzas for all the elites in the audience to eat on camera to mock PizzaGate,” a CIA source notes.

“Or when Jim Carrey came out on the Jimmy Kimmel show flashing the triangle hand symbol, and did a tongue-in-cheek mockery about how they are all members of the Illuminati occult. His Hollywood career came to an end shortly after this as you know,” the source continues. The interview is below on YouTube.

They have the power to get the sheep to laugh WITH them, thus rendering it a silly notion

Speaking about sheeple, we note that Ghislaine Maxwell was found guilty on 5 of 6 counts in the Epstein sex trafficking case.

The real story -according to a Mossad affiliated contact in NY- is that Maxwell, who already flipped sides months ago, has turned over volumes of incriminating documents to the Alliance. This will send hundreds of senior satanic cabal members to Gitmo for processing and execution. “Watch for Ghislaine to commit suicide or have a fatal heart attack in jail very soon. Don’t worry, she is already in a safe and very secure location, with the Alliance,” the source says. That is the real reason why important details about the case were sealed by the judge, he notes. “The entire court proceeding was a circus show for the sheeple,” he concludes.

In any case, the fact that our visual entertainment has migrated away from traditional Hollywood and towards streaming services like Netflix shows the clean-up of the “celebrity” world is well underway. This was thanks in large part to double agents like Jeff Epstein and Maxwell.

The next big priority is to finish the detoxification of the financial world. This has to do with the Rothschild controlled 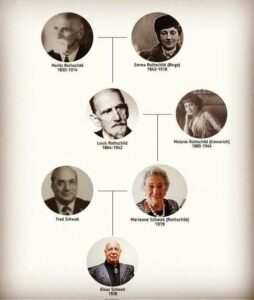 , rigged Libor (London Interbank Offered Rate) interest rate control mechanism. While no new contracts are allowed to use Libor, there are still about $230 trillion in contracts that rely on it. “It’s one of the biggest transitions in financial markets in decades,” says Dixit Joshi, group treasurer of Deutsche Bank.

When we asked the person who originally blew the lid on Libor about this he said:

The illicit financial system is based on a computer system in Antarctica run by a person going by the code name ‘Ian Fleming’…Ian Fleming is the computer technologist protected by MI6 by way of a gentleman by the name of Scot Lennon. We have his details…The fraudulent computer mainframe which launders money to pay for fifth columns including the so-called public health emergency –another WMD [Weapons of Mass Destruction] scam- is owned and controlled by various factions in retreat from us…By simply using these names you will see the very vast majority of the criminal conspiracy to genocide run to the hills. The rest the military can deal with.”

We have run across Scot Lennon before and know he is one of the last surviving members of the Majestic 12 group set up by President Dwight Eisenhower to deal with “aliens.”

The fact that two-thirds of the Belgian Antarctic base’s staff just “got infected with Covid 19” appears to be related to this. We assume it was special forces who “infected” them.

In any case, as this news item shows, unless the West hurries up and removes its Satanic infection, China is going to leave us in the dust:

China’s “artificial sun” ran for 20 minutes at a whopping 70 million degrees in its latest experiment – five times hotter than the real sun.

The prospect of free energy is something that cannot be understated. If properly harnessed it would allow for users to increase the amount and variety of life exponentially: a trillion fold, a quadrillion fold or more. The amount of carbon available will be the only growth constraint to the new Cambrian explosion.

Views: 816
E-mail me when people leave their comments –
Follow