ASSOCIATING WITH SAD GURU IS THE ONLY WAY TO RECEIVE THE TRANSCENDENTAL SOUND VIBRATION FROM KRISHNA'S FLUTE. 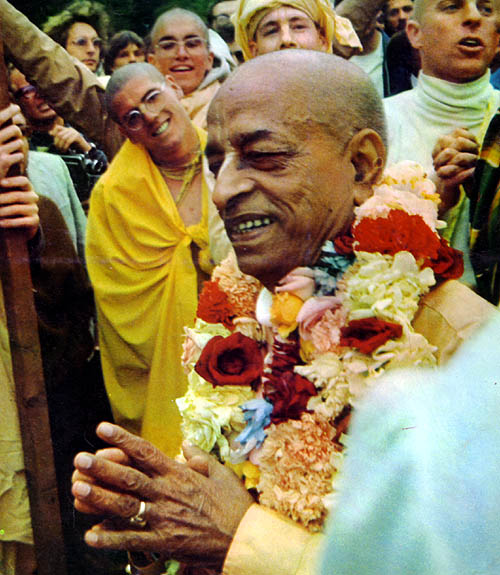 I have written many articles on transcendental sound vibration, its difference from material sound and how it manifests in this world. Oddly enough I was recently focusing on a statement of Srila Bhaktivinode Thakura concerning the continuation of the manifest presence of the transcendental sound vibration within this world. I would like to present to you some of the realizations I have had regarding this.

He reasons ill who tells that Vaishnavas die
When thou art living still in sound.
The Vaishnavas die to live and living
Try to spread the holy life around!

This is part of poem written by Srila Bhaktivinode Thakura while contemplating on Srila Hari Das Thakura’s Samadhi. There are a number of devotees who like to quote this verse as evidence that the tape recordings of the pure devotee are the continuation and manifest presence of the transcendental sound vibration of the pure devotee. Srila Bhaktivinode Thakura wrote this poem in 1871. Therefore this verse was written six years before the Gramophone was invented by Thomas Alva Edison. Furthermore it was written about someone who most certainly was manifest and left this world in an era when no such recording device existed. If we consider this carefully an intelligent person would inquire what the intention of the author was when he said in the poem that Srila Hari Das Thakura is living still in sound. What sound? From where will the sound of the personality Srila Hari Das Thakura come from since there are no tape recordings of him speaking? How will we hear this sound?

Srila Prabhupada addresses this issue in a lecture he delivers from the Srimad Bhagavatam sixth canto, first chapter, twenty fourth verse in Chicago on July 8th 1975:
“Then how I shall make progress?" Now, namanta eva san-mukharitäm bhavadiya-vartam. "Just hear the message of God." "From whom?" San-mukharitam: "through the mouth of the devotees." Not professional, not gramophone—through the mouth of, through the lips of real devotee.”

Srila Prabhupada further supports this in a room conversation that he has on August 9th 1971:
“Guest: If you could just explain to me the difference between the... I mean, how this fits in, the monistic or the idea of the unitary view that Krsna is everything, all and in all. And then at the same time that the world, there is this world of illusion which is somehow distinct from Krsna. Could you just explain this point to me?

Prabhupada: This is very easy to understand. Just like you are recording my speeches in the tape recorder. When you play back it will speak just like I am speaking, but I am not there. Is it not fact?

Prabhupäda: It will appear now I am speaking from beyond this world.”

Srila Prabhupadas choice of words is telling and very specific. The meaning is clear: It appears I am speaking from beyond this world. It appears when we hear the tape recording that he is there but as Srila Prabhupada says I am not there.

In another lecture in Bombay on March 30 1971 Srila Prabhupada further clarifies the same point he is making in the room conversation to this man:

It is different He is not speaking directly. It is separated energy, separated from him, not him, it only appears to be him but he is not there.

Then again Srila Prabhupada states the importance of transcendental sound coming from the Living Bhagavat, a terminology that Ritvik devotees often describe as an oxymoron and incorrect statement of siddhanta. However, we will see here that Srila Prabhupada himself uses the terminology.

Bhagavatam has to be studied from the very beginning and take the lessons from live bhagavata.750908SB.VRN lecture

This is the exact meaning of Srila Bhaktivinode Thakura’s poem.