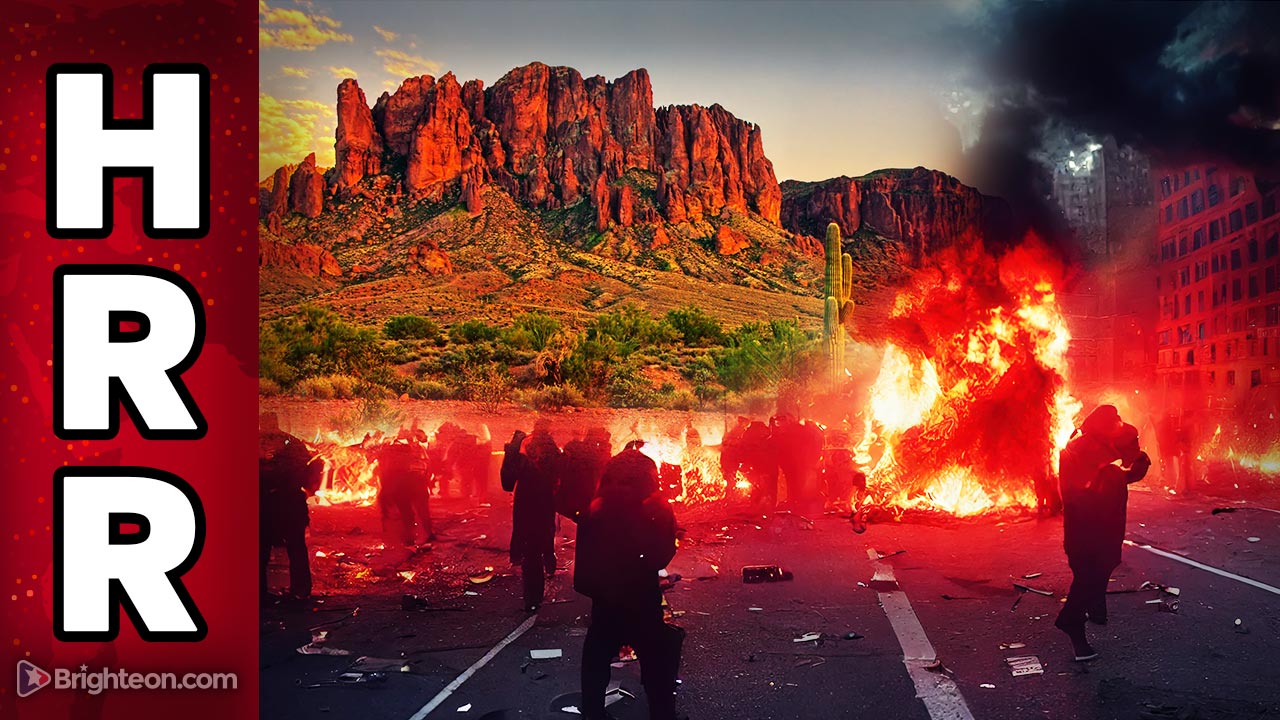 (Natural News) In today’s Situation Update podcast (below), I explore why globalists desperately need control over Arizona. The next stage of their plan is to have Joe Biden sign the WHO’s pandemic treaty, and that will be followed by the release of an engineered “pandemic” which we’ve already established can be staged by dispersing chemical weapons on any given city, accompanied by media hysteria claiming an “outbreak.”

Once the invisible virus scourge is declared — which no one can verify because you can’t see viruses and you can’t ask any questions without being censored — then the WHO declares a health emergency and orders nations and states to start locking people down, China-style. Under the direction of the WHO, mask, vaccines quarantines and lockdowns can all be mandated, regardless of local laws. Enemy military occupation of the United States of America would be resisted if it were carried out by foreign soldiers in military uniform, but the American people will put up with all kinds of tyranny as long as the soldiers are dressed in biohazard suits and the actions are painted as “public health” emergencies.

Arizona is critical for globalists to control because it is:

1) A high gun ownership state with high potential for armed resistance against the occupation and destruction of America by enemy forces.

2) A gateway state where illegal immigration must be allowed to continue so that the flow of migrant combat forces and replacement citizens can continue unabated.

3) A border state to California, which is where China’s planned invasion of the United States will likely form a beachhead, after which military power will be projected into neighboring states as China’s military forces move eastward to secure America’s farmlands.

Thus, rigging the Arizona election was critical to the globalist goals for occupying and overrunning America. It grants them control over key territory necessary to complete the planned invasion of CONUS.

What people desperately need to understand is that the next pandemic being engineered will be far more tyrannical and dangerous than the covid plandemic. This next one will feature far higher fatality rates and a rapid escalation of government control over your life due to the “public health emergency.” My prediction is that this next one will be unleashed sometime in 2023, and it will be used to finalize the destruction of the US economy while obliterating any remaining freedoms of movement, financial transactions or speech.

This is the end game, after all. The pandemic pushers believe they can now rig elections with impunity as long as they can keep a pandemic emergency in place indefinitely. Mail-in ballots allow them to simply mass print however many ballots they want in advance, then “discover” the necessary number of ballots they need after having paused the counting to make sure the GOP candidate doesn’t win. A never-ending plandemic emergency is the key to ongoing vote rigging as well as convincing people to give up their freedoms and privacy in the name of “health security.” And with Arizona firmly in the hands of the vote riggers, no GOP candidate has any real pathway to victory in 2024 (not that Democrats even care about elections from this point forward, since they have mastered the vote rigging to such a degree that they can literally run brain damaged candidates who magically win without fail).

The other important element here is how the plandemic will be used as cover for a currency collapse that forces people into a digital currency system, signifying total police state control over individual actions and finances.

This will likely be achieved by blaming the currency collapse on some third party (China, Russia, hackers, etc.) while presenting the digital currency system as a safeguard for your money. The claim will be that if you keep your dollars in the banks, you might lose them, but if you move to the digital wallet system run by the Fed, then you will be safe and secure. This will be augmented with some Universal Basic Income elements that credit your digital wallet with additional FedBucks as a carrot for those who can barely afford gas or groceries.

The end result is that most America will end up totally enslaved, vaccinated, surveilled and controlled by the very same people who are rigging elections and unleashing depopulation bioweapons on the people. From this place, tens of millions of Americans will be exterminated over the coming years, plunging the US population into Deagel projection territory.

– Katie Hobbs is being “installed” in another stolen election
– Globalists need control of Arizona for coming staged PANDEMIC
– Under the guise of public health, political dissidents will be exterminated
– Democrats are waiting for Biden’s signing of the WHO pandemic treaty
– Once signed, the treaty overrides all state, city and county powers
– A massive pandemic will be staged, possibly with chemical weapons
– Once unleashed, the WHO will invoke medical dictatorship powers
– Americans will be ordered into isolation camps and mandatory vaccines
– The emergency will NEVER END because it will always grant power to the corrupt
– How to survive the engineered emergency – have OFF GRID everything
– They will create a financial emergency to shove you into a digital currency trap
– Special report on “mouse utopia” and LGBT signs of cultural collapse

"...provided that the star gates are not the so called Einstein-Rozen Bridges. This latter belongs to the same category as Von-Neumann Probes, Warp-Drives and other mainstream's hopeless concoctions. These might as well better belong in comedy rather…"
More…
Loading ...