I like to ask this question...Sex what is it?....Porn?.I was never told anything about it, except that its a (taboo...parents!). A sensitive empathic answer I like please. I don't buy all the gender-stereotyped rubbish (brainwashing, propaganda...lies!..Evil illuminati!) of the media! Asides through all the toxic psychotropic drugs I was forced to take (evil psychiatry!...toxic,toxic!) I seem likely to be sexual dysfunctional (erectile dysfunction?!?) , soeme tardive dyskinesia too! Is sex really needed? No idea...I hope I posted this in the right place...Here I post my painting of my broken heart... 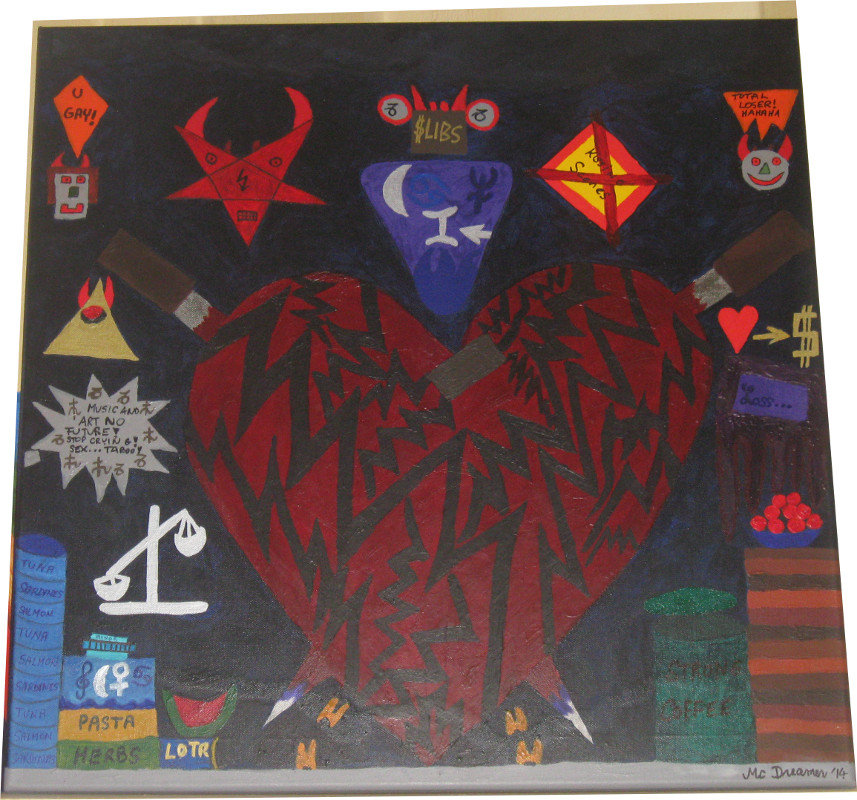 This is my painting...I often paint...I hope the photo is clear enough

I have a broken and sick heart...This so sick world (no empathy...my 'soul seems female' NOT male) gave me more traumas & deep depressions, than anything else! Seem to carry female energy, which this sick world hates. Eaten tons of chocolate, fish, and drowned tons of cups of strong coffee beyond count,still do...addiction, addiction. An Emotional wreck,feel I failed...failed...Need healing, real deep healing!...'Shamanic Healing' is that any good? It mentions 'soul loss' occurring, in the happening of traumatic events (had many) ...That sounds far more plausible than any of that filthy toxic psychiatry fake-science rubbish! [www.cchr.org] But finding one that is within reach and affordable, proves a real pain (the ones I found were in country towns, no public transport]! *river-cries* :( So the issue of finding suitable (sensitive empathic) healing remains...

And this...Planet x is coming in the nearer future...

If this is true, including the prediction of planet x coming sometime next year. Where does that leave poor souls like me?!? I want no ascension, sick heart/soul, trauma, etc...feel this is for me far toooo soon. Asides I had more or less an atheist kind of upbringing, without offense meant...no religion , including all that 'christian' soup which sounds to me ;like a lot $greed-coorps manufacture to spend tons of money on rubbish...Paganism, brainwashing...propaganda, including the so depressive irritating rotten music they blare everywhere (yucky green-red colours)....No thanks! And I already saw some traces of the coming of another commerce pagan $Xmas onslaught now...*dread* :(

I prefer silence to all this noxious depressive noise and $commerce...A trip into the cold would be real good (before planet X)...polar regions...Photos from polar regions seem to have had a strong pull (must have a reason)...Have a number of polar brochures and books. Its true, I always loved cold weather (including thick snow) not hot, which always made me feel real miserable even health endangering (dizziness, mega-headaches...near heat stroke experiences...polar bear sweating and more),...like in a prison, I just cant stand heat! Read in a recent New Dawn magazine about RH-Negative blood types...there its mentioned about unable to stand hot weather....Thats to a great extent my case.....Is that what they mean with nordic blood or? ...Maybe someone can answer this. Had no blood test to confirm yet, but I feel alien, including very strong aversion to hot weather...strong intuition too (childohood)....I forecasted whats about to happen, and parents didnt listen...it was at times very visual flash.... Heat always makes me feel sick...not the cold though...Love snow, and the jackets that I even see in Sydney, I dont need at all...

.Apologies for the lengthy post going to certain extent beyond the initial question...I'm not often online (no internet at home) and hope one understands...And leave with some scene links of polar regions...

We are witnessing chaos, hate and confusion in the United States and all over the world right now.…