This report will concern an important discovery made with the horoscope of Jeffrey Epstein, as it may explain for his horrific sexual behavior. The real time of birth of Jeffrey Epstein is unknown, so we will have to use 12:01 pm for January 20, 1953 (and he was born in Brooklyn, New York). The chart below is his horoscope according to these parameters. 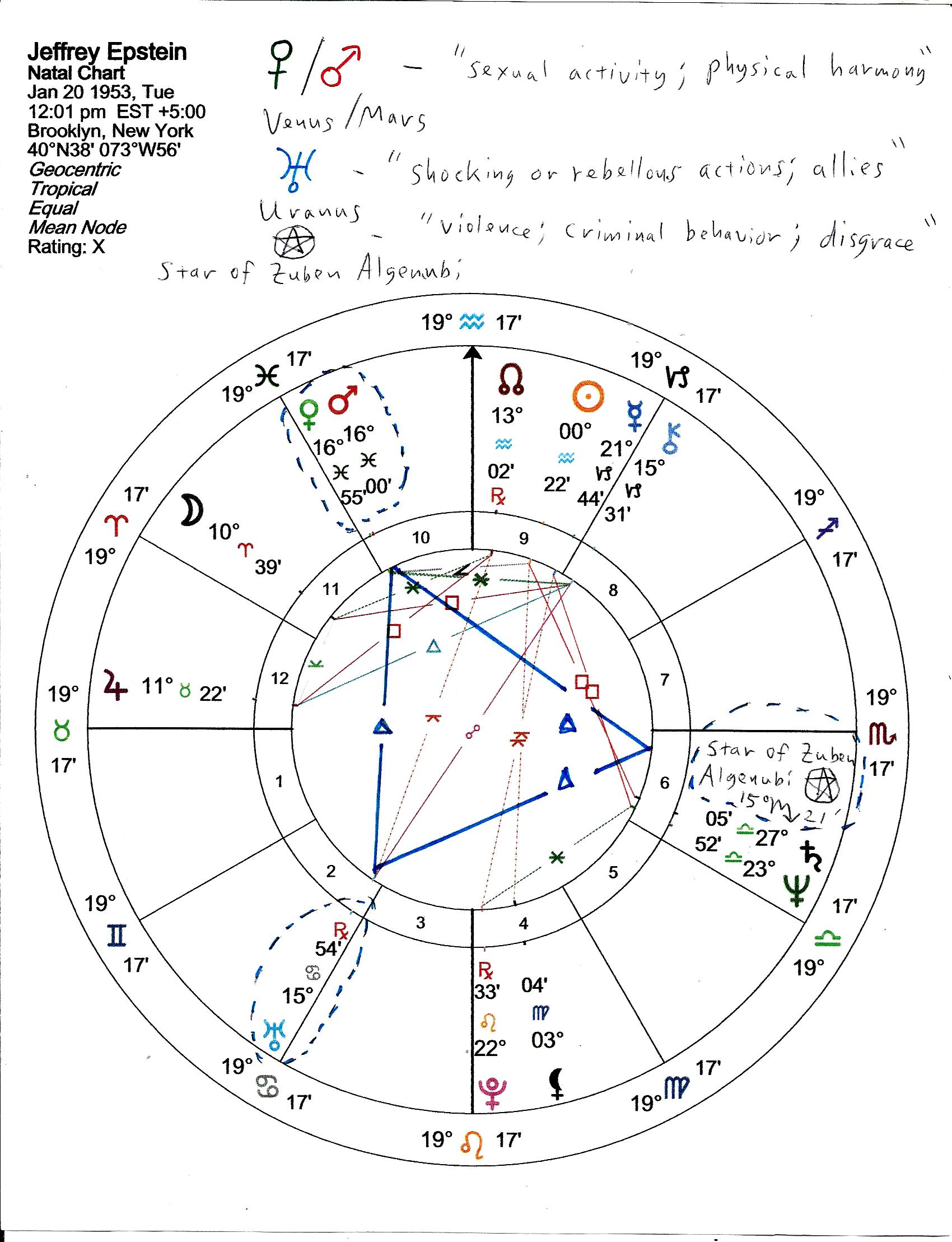 Highlighted above in blue is a Grand Water Trine involving one point featuring a Conjunction of Venus & Mars (which defines "sexual activity" and "physical love" according to most astrology interpretations (and yes, "activities involving art" is another interpretation that has a weaker possibility)), Uranus at another point (which is defined by "shocking or unusual activities" and "friends or allies" per most astrology interpretations (and yes, "technology" is another weaker interpretation)), and finally the star of Zuben Algenubi. Below is a very good description of this star from Jamie Partridge of "Astrology King." 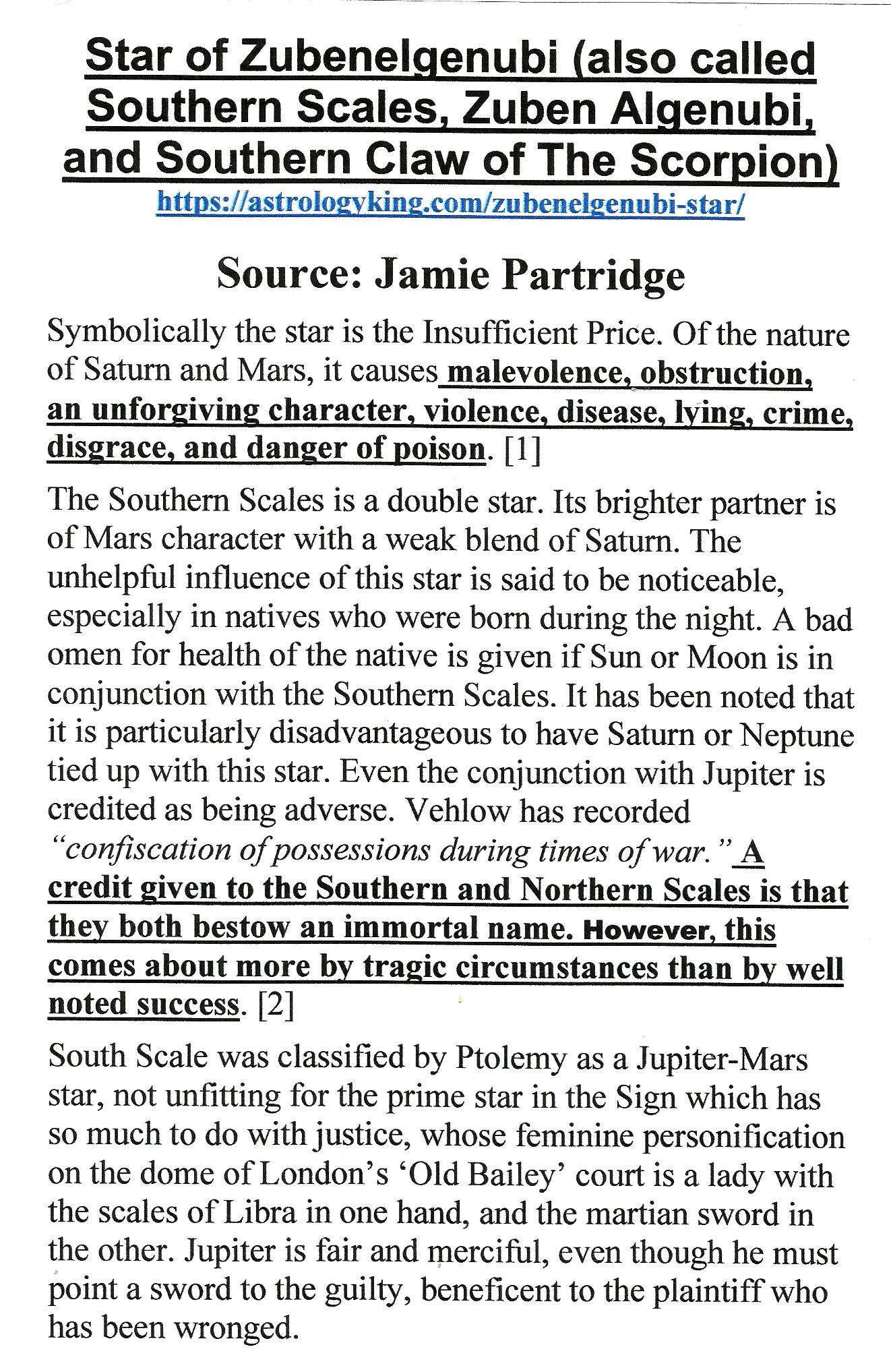 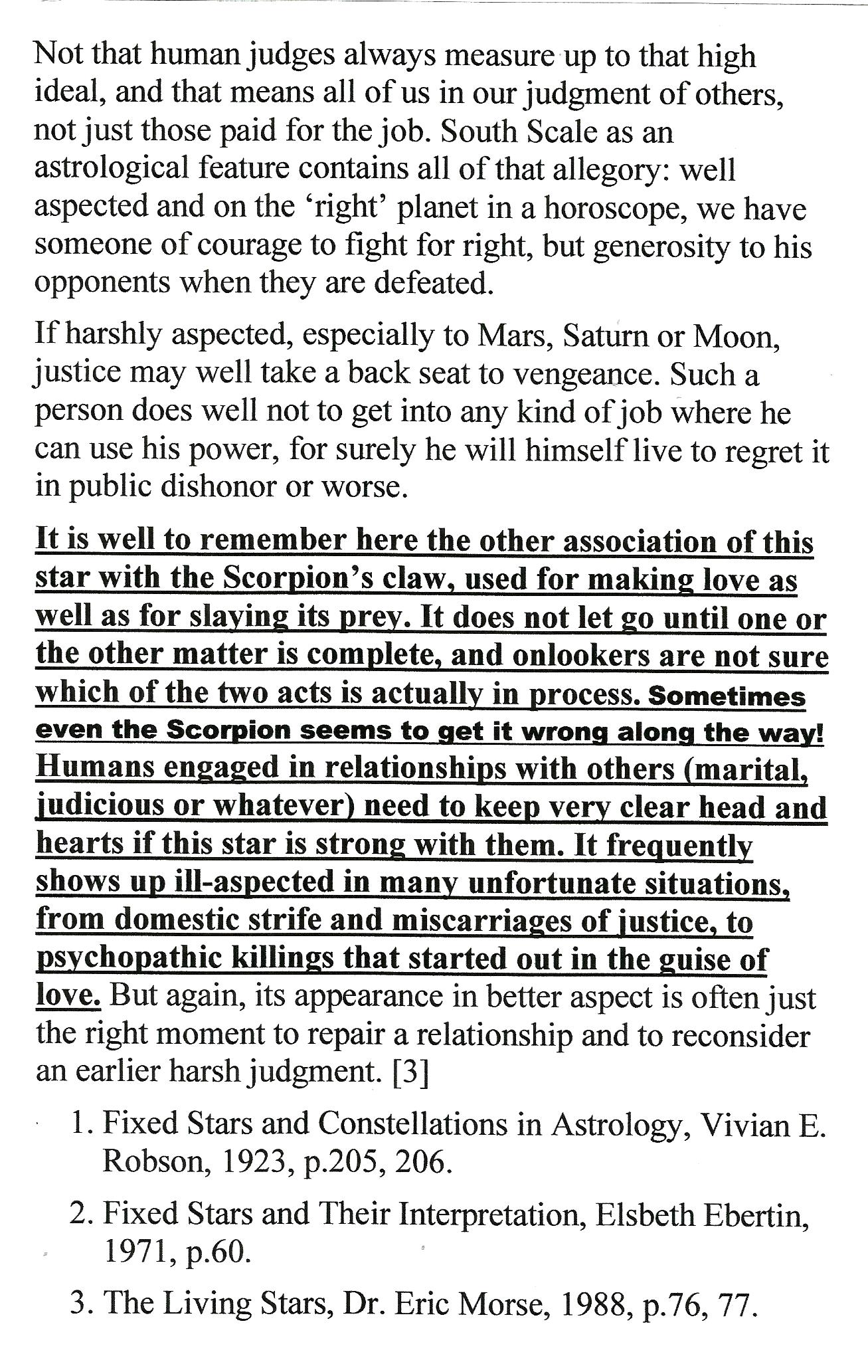 Now, let's put together this strong Grand Water Trine into a simple description:

Jeffrey Epstein experienced great harmony (which describes the energy of a Grand Trine) when Epstein was involved with "sexual activity" (i.e. Venus Conjunct Mars) which featured "unusual or shocking activities" (i.e. Uranus) and also with an addition of "violent actions, criminal behavior, or miscarriages of justice "  (i.e. Zuben Algenubi) to these acts that he loved to be involved with.

Hence, Jeffrey Epstein really liked unusual sexual activity (i.e. pedophilia) of a violent and illegal nature (i.e. rape, sexual assault, unconsented S & M). Another possible definition with this Grand Water Trine is that Epstein "used blackmail" (possibly represented by Zuben Algenubi) in accordance with "shocking sexual activity involving his friends and allies" (which may be represented by the placements of Uranus and the Venus/Mars Conjunction). 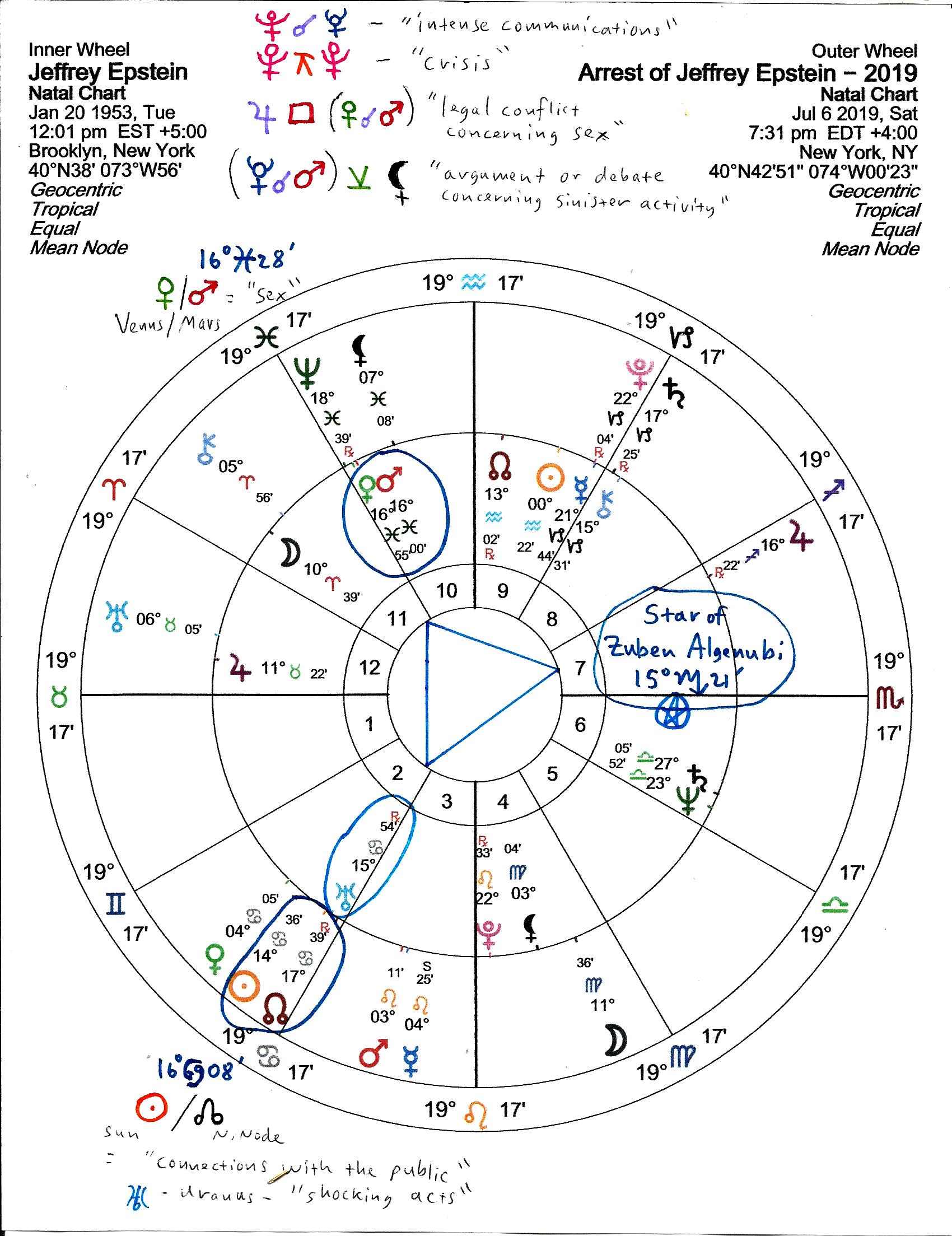 The Day of Arrest transit of Sun / N. Node (above) Conjuncts Epstein's natal Uranus very hard. This Conjunction appears to kick off a high level public awareness of Epstein's activities like no other; even the shadow-government supporting mainstream media factions of CNN, MSNBC, and the New York Times were forced to make Epstein's arrest placed as headline news. But the one transit that really sticks out (above) is the very strong Pluto Quincunx Pluto transit. Any transit of Pluto to the natal position of Pluto usually defines a crisis of some kind, be it health-wise or reputation-wise. Note that Hillary Clinton had this same Pluto Quincunx Pluto transit taking place on her horoscope chart in the summer of 2016 during her run for U.S. President.

Transits at The Time of Jeffrey Epstein's Death 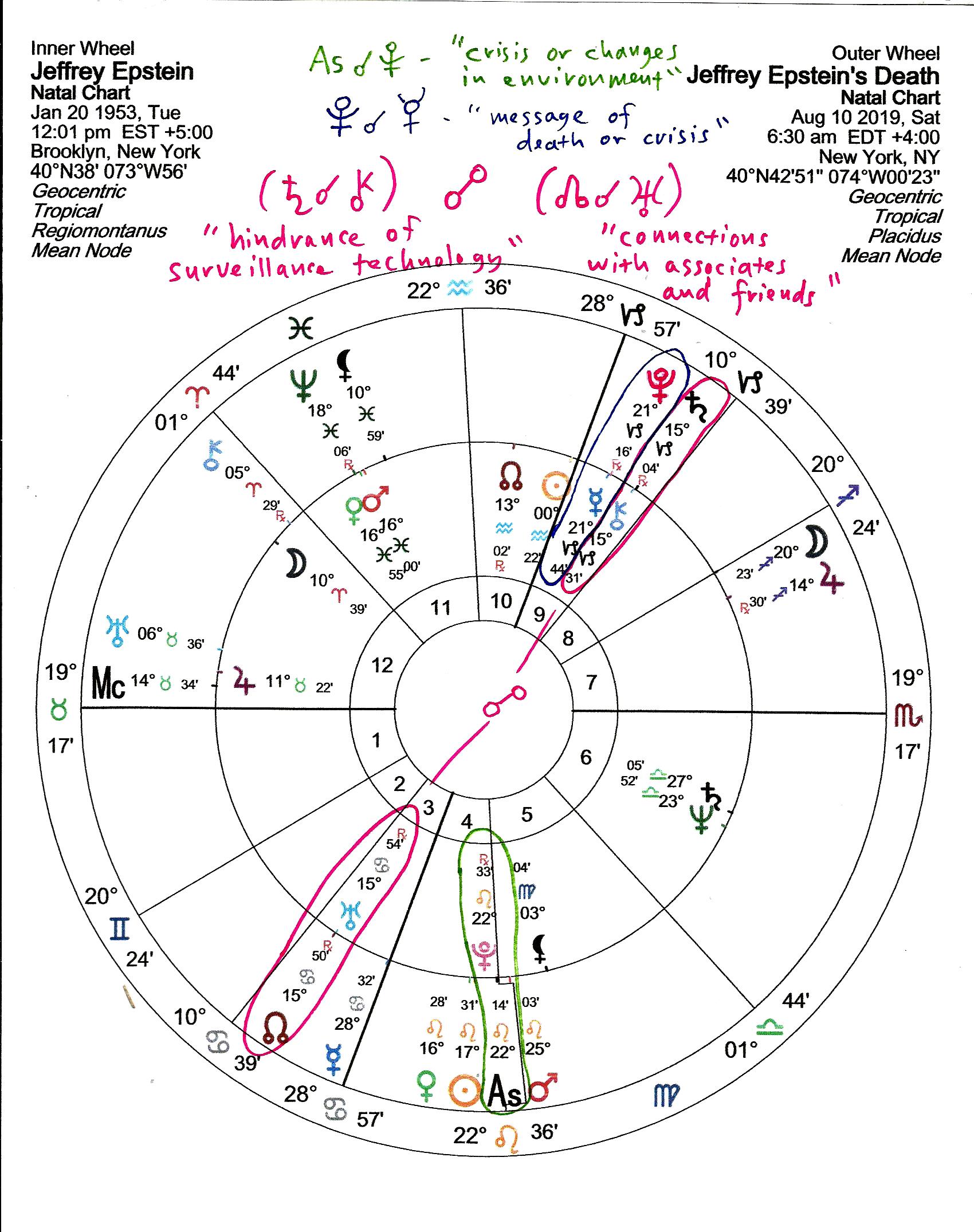 Please look at the aspects circled in pink above. For those of you who have been following my work, you are all probably aware that I have strongly advocated the definitions of "surveillance technology; advanced technology; extraterrestrial involvement or connections" with Chiron (and this is in addition to the traditional definitions of "capability for healing; past wound; a healing or metaphysical talent; how one heals others"). Saturn Conjunction Chiron strongly implicates "a restriction or hindrance of surveillance technology," and with this placement forming an Opposition ("hard choice") aspect with a transit of N. Node Conjunction Uranus ("connections or associations of friends/allies of Jeffrey Epstein"), this strongly implicates that Jeffrey Epstein's friends/allies (who were probably the same "friends/allies" that were named as his partners in crime (i.e. Bill Clinton, Simon Peres, Bill Richardson, Alan Dershowitz) in the unsealed court report that was opened 14 hours before his death) were probably also the same "friends/allies" that may have been responsible for this turning off of the surveillance cameras shortly before Epstein's time of death. Pluto Conjunction Mercury (drawn in blue above) is very strong, and this defines "a message of death" delivered to Jeffrey Epstein (or "media news of the death of Jeffrey Epstein" as another possibility). I received a phone call informing me that my father was dead during an exact Pluto Square Mercury transit, so I prefer the "message of death" interpretation with this Pluto Conjunct Mercury transit. 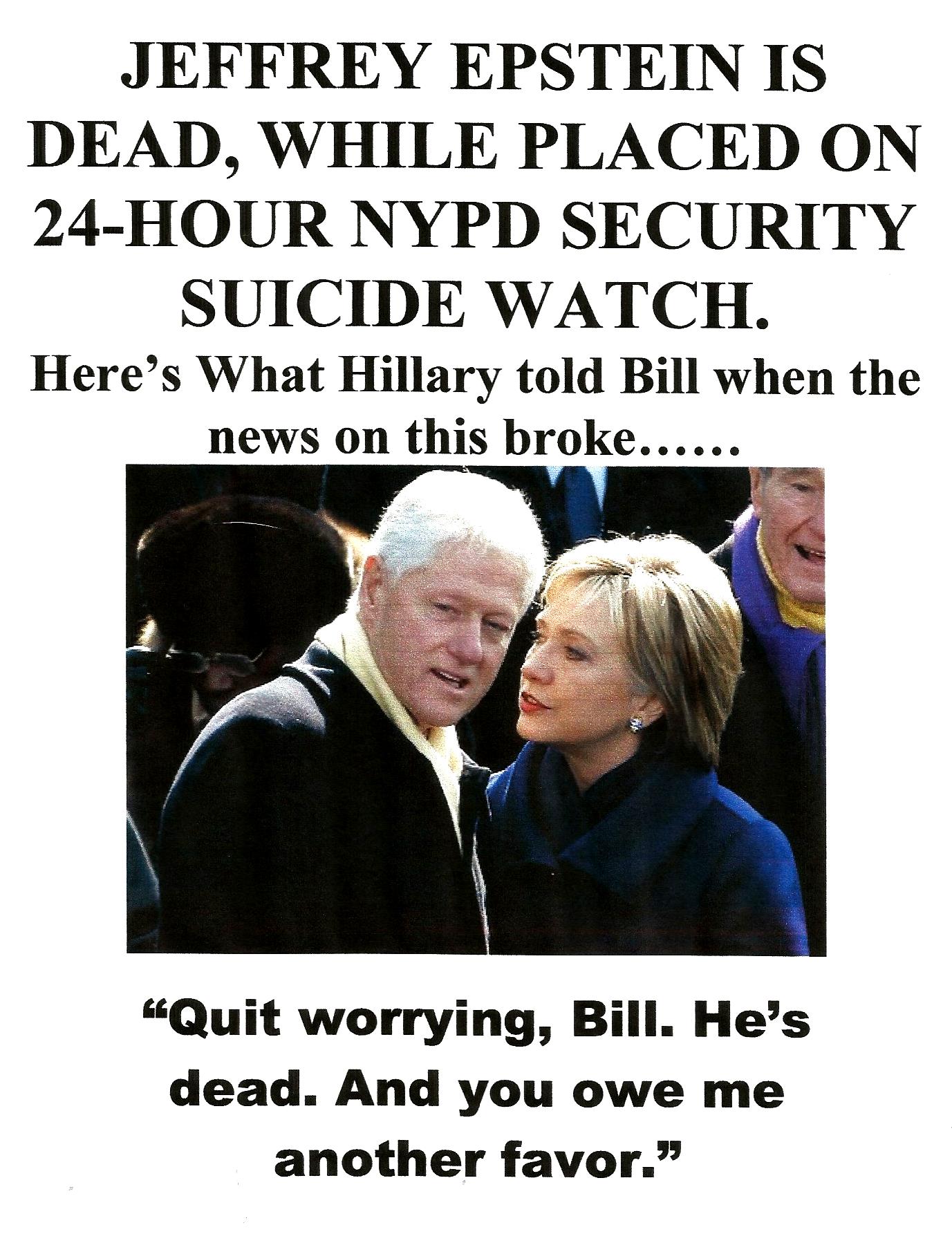 "Sometimes we think a thought, or intuite a something and might simply dismiss it as "nothing." In fact, most people just ignore any prompts, gifts and helpful directions, they might glean...Could be your own higher guidance, or a guide (usually we…"

"As i read it is only because Im educated that i know the meaning of each word as i read it and i guess this process ive become quick at over the years. Like i only have to scan a few words to understand their definition and i can pretty much gather…"

"Black and white, No grey. I hate that i might not get the opportunity to communicate with higher knowledge and dimensions is im blocked somehow from this. Like i cant even accept it. but i dont see how i can. There has to be more to this."

"I never have intuitive feelings, and im a terrible judge of character. I dont live with anything. I have not got that going on. Like i want it going on. I listened (voice to texted the violet eyes. Thats cool. My eyes change from blue to green. And…"

If you tell most medical doctors that essential oils bring about healing with no negative side effects, they won’t believe you. This is because in medical school, students are repeatedly told by their professors that all effective medicines have…
See More

"Sometimes it's less a "voice" and more an intruitive feeling, so you know it feels right...You may be using effective intuitive skills without even realising that this sub-conscious guidance is coming from your higher self...Or maybe an ascended…"
More…
Loading ...