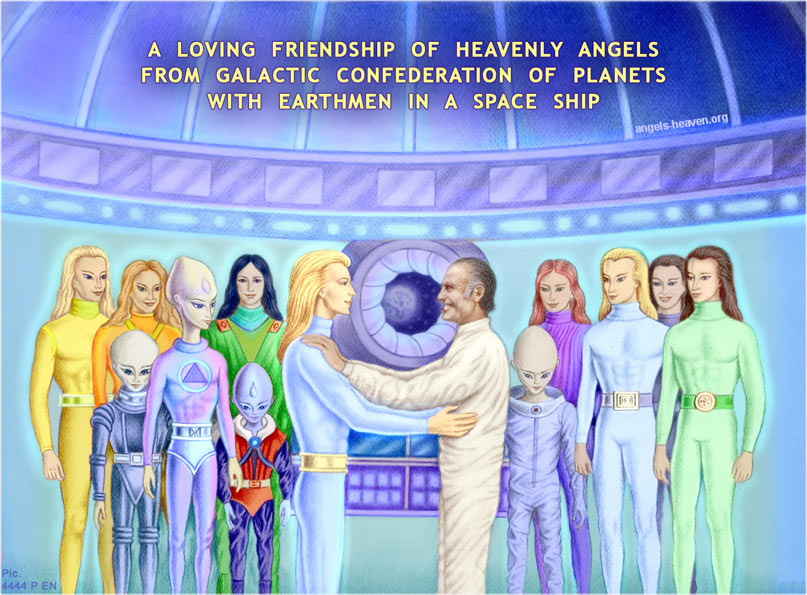 When your focus is on the future can you feel the uplifting energy around you, if not make time for yourself to relax in quiet surroundings and you surely will. There is no need to carry the burden of the world upon your shoulders, just allow it to find its own path to completion, because that is a feature of the times you are in. You should be sufficiently confident about your destiny to believe that you are on the verge of great changes, that will put you on another path leaving the old paradigm behind. Ascension is your future should you desire to take it, and much effort goes into ensuring that all souls are in contact with the truth. Whether it becomes part of your beliefs by replacing false teachings is everyone's personal choice.

It is time to take responsibility for your future, and not rely on other people unless you can be sure that they speak the truth. That is where your intuition comes into play, and it will be reliable unless you allow your ego to dictate otherwise. Sometimes people are reluctant to give up their pet theories, and would rather live with uncertainty as their travel companion. We understand how difficult it is to admit to having been misled by those very people that you placed your trust in. However, when you decide to be your own person you will find that there is no lack of information and guidance, that will put you on the right track.

Simply put, when you look for the purpose of life, commence from the fact that there is only the One God that all life exists within. That will so to say, clear the decks where the different religions are concerned as no particular one as opposed to another, can correctly claim to be the only one holding the truth. That having been said, you have infinite life and are not your body but change your form each time you incarnate. However, your soul which is your godspark is indestructible and grows through evolutionary experience, and is forever reaching out to the higher dimensions and eventually the Source of All That Is. If you can accept that these are truthful statements, it will give you the basis to expand upon and become more enlightened.

Most people have heard of the Masters, and when they walk the Earth their teachings will enable you to check how far you have advanced in your beliefs. There will be some who will be at a point where they have no particular beliefs, and feel unready to make decisions that would change the course of their lives. They will not be coerced into anything different, but are clearly unready to move out of the 3rd. dimension. They will therefore continue to experience in that same dimension, until they choose to awaken. They must not be considered failures in anyway, as it is your choice as to how long you spend in any one particular dimension. The truth is that once you become Beings of Light, you will have a strong desire to progress to the higher dimensions.

In your ancient history you have many references to the gods that came to Earth, more often than not as "those who came from the skies". There could hardly be a more descriptive observation, and it means exactly what is says. Now that you have long been familiar with seeing our craft in your skies, you realize that it a clear reference to Space Beings. To Man some thousands of years ago we would have seemed to be gods, and that explains much that has remained a mystery for such a long time. However, not all contacts have been made out of a desire to help you, and some have taken advantage of your beliefs that they were gods. This has caused a misrepresentation of what our purpose is in contacting you, but we are pleased to say that with time the majority of you accept us Beings Of Light. With the coming high vibrations that will exist on Earth, it will be no longer be possible for entities of a lower vibration to penetrate Earth.

In the latter part of next year, the Lemurians who are your ancient Brothers and Sisters will join you from the Inner Earth, and along with other visitors you will have much to learn. Many other souls have eagerly put themselves forward, to be part of the final stages of your preparations for Ascension. There will be more than ample help for the various projects you will be called upon to assist in. Naturally it does not end with Ascension, as it is the beginning of a new era of co-operation to bring you up to the level of Galactic Beings. So the next few years will be really exciting and you will also have reached a state of being, where the changes in your physical body will have overcome the conditions that have previously led to aging.

We have told you so much about the changes for the future, but we hasten to add that not everything is going to happen in the space of the next 12 months. However, the speed at which they will come will keep you well occupied. Your consciousness levels will have been lifted by 11.11.11. and continue to rise well into the future. In that respect you will become all-knowing, and have earnt the right to be called Masters. Remember that you were once previously at those higher levels of consciousness, and lost much of it as you dropped down into duality.

Dear Ones, we of the Galactic Federation are gathered for the final days of the last cabal, who can only offer token resistance now that their power has been seriously weakened. We have always been able to traverse your skies quite safely, and the occasions that you learn of crashed craft are invariably intruders such as the Greys and their Reptilian friends. Shortly we shall feel freer to be more open in out travels around Earth, and intend that more of you should see our craft. You are entering a period of high activity both on and off Earth, The Divine date for Disclosure rapidly approaches, and the necessary arrangements for the announcement that will precede it have been drawn up.

I am SaLuSa from Sirius, and like the idea of seeing your delight and excitement when the first of you are invited upon our ships. We can tell you all we like about ourselves and craft, but there is nothing like first hand experience to really take in the true impressions that you will be left with. Also meeting us will dispel any last doubts you might have had about us. When we talk about sending out our love, it is something you will clearly feel when you are in our presence.

This message and frankly allot of messages comming out of the GFL is a bit over the top.   and I am quite certain that as our awakeness as it increases, the things that used to impress us dumb humans fail to impress anymore as we grow up.  A child will out grow a toy very quickly out grow cloths, shoes, story's and move on.

UFO's are now old hat, and am not impress with them or the technoigy they represent anymore like getting used to seeing a 57 chevy driving around all the time, once and a while you'll see one, but who really give's a crap there old.

So why in the hell would I even want to get inside of one. oooooow its going to impress me.. NOT  Its just a vehical, transpertation.nothing more.  For Salusa to use this as some sort of impress or WWOOWW moment in the future I thought ET's were above all this material EGO Look what I have and you dont have bull.

Its just more and more I'm seeing allot of grand standing, and showing off, and walking around a space ship, or mother ship is just that walking around.    I can do that at the Mall.   its called exersize!   I really don't care about see more of this ellusion of stuff in this play ground of Stuff its all stuff.

Salusa leave all youre toy's and STUFF at home teach me how to know myself, the light in my heart, my soul, spirit and how to get this world out of the hands of the rich bullies, I am no longer impressed with, you or your technology, teach me how to open my heart to creat the mercaba the energy of the heart.

and quit talking about how many boat loads of star ships you have, big wwoup!   Bling BlingBling you words lose its meaning when all you do is Bling all that you have.  If i grew up living in a cardboaard box, what in the name of reason would suddenly living in the Tahsg ma hall how ever you spell it.

Joanna liked amparo alvarez's discussion WHAT A WONDERFUL WORLD in one of the most beautiful and unique voices...LOUIS ARMSTRONG
1 hour ago

Alan commented on the blog post 'THE 9 D ARCTURIAN COUNCIL - " THE CURRENT ENERGIES WE ARE PUTTING IN YOUR FIELDS" through DANIEL SCRANTON'
"Thank you for the continued (often needed) Pep-Talks, they are massively needed in these troubled…"
4 hours ago

Alan commented on the blog post 'THE PHYSICS OF THE TURMOIL by MATTHEW WARD'
"Very well explained........... Again.  No matter what, or how long it takes, it will be heard…"
4 hours ago

Alan commented on the blog post 'THAT "WORK" IS TO BE LOVING WHATEVER ARISES..by SAUL through JOHN SMALLMAN'
"Thank you, Amp.  Truer words do not exist, a great way to follow.  Blessings."
4 hours ago