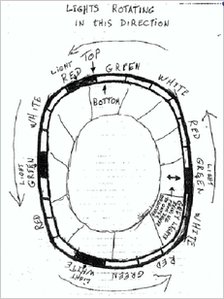 The government took the threat of UFOs so seriously in the 1950s that UK intelligence chiefs met to discuss the issue, newly-released files show.

Ministers even went on to commission weekly reports on UFO sightings from a committee of intelligence experts.

The files show reports of UFOs peaked in 1996 - when The X Files was popular.

The Joint Intelligence Committee is better known for providing briefings to the government on matters relating to security, defence and foreign affairs.

But the latest batch of UFO files released from the Ministry of Defence to the National Archives shows that, in 1957, the committee received reports detailing an average of one UFO sighting a week.

The files also include an account of a wartime meeting attended by Winston Churchill in which, it is claimed, the prime minister was so concerned about a reported encounter between a UFO and RAF bombers, that he ordered it be kept secret for at least 50 years to prevent "mass panic".

Nick Pope, who used to investigate UFO sightings for the MoD, said: "The interesting thing is that most of the UFO files from that period have been destroyed.

"But what happened is that a scientist whose grandfather was one of his [Churchill's] bodyguards, said look, Churchill and Eisenhower got together to cover up this phenomenal UFO sighting, that was witnessed by an RAF crew on their way back from a bombing raid.

"The reason apparently was because Churchill believed it would cause mass panic and it would shatter people's religious views."

Reports of sightings of UFOs peaked in 1996 in the UK - when science fiction drama The X Files was popular.

According to the files, there were more than 600 reports in 1996, compared with an average of 240 in the previous five years.

The figures for 1996 show 609 reported sightings of unidentified flying objects, 343 letters from the public to the MoD's UFO desk and 22 enquiries and questions from MPs.

The 18 files released on Thursday are the latest to come out as part of a three-year project between the MoD and the National Archives.

Dr David Clarke, a UFO consultant to the National Archives, explained why the papers are being made public now.

Dr Clarke told the BBC: "Since the Freedom of Information Act arrived in 2005, this subject - UFOs - have become the third-most popular subject for people to write to the Ministry of Defence saying 'please could you release this file, or papers that you hold on this particular case'.

"What they've decided to do is to be totally open and to say, 'look we're not holding any secrets back about this subject we've got all these files and we're going to make them available to the public'."

One includes details on "aerial phenomena" prepared for a meeting of the Cabinet Office's Joint Intelligence Committee in April 1957.

According to a note included in the Red Book, the weekly intelligence survey, four incidents involving UFOs tracked by RAF radars were "unexplained".

The documents also include reports of a famous incident dubbed the "Welsh Roswell" in 1974, where members of the public reported seeing lights in the sky and feeling a tremor in the ground.

Other cases included in the files are:

The files come from more than 5,000 pages of UFO reports and letters and drawings from members of the public, as well as questions raised by MPs in Parliament.

Permalink Reply by Teddy on August 7, 2010 at 4:58am
Ok, so they're releasing more ufo classified information. This is a means to what end? British Intel, what are you up to?

kingjeff commented on the blog post 'OUR GOD-SELF: THE TRUE SEAT OF HAPPINESS'
" Profound Post Amparo  2 members awake and 22 still asleep and it is a pity  that…"
57 minutes ago

Krishna Kalki replied to the discussion '5D Pleiadian Taygetean Who Met With Elsenhower SPEAKS OUT .. First Time In History'
"Necluar Disanment on Planet Earth is rightfully what Extraterrestrial Want .. and still the corrupt…"
2 hours ago