As Above So Below...

THESE PICTURES CLEARLY SHOW US THE STATEMENT
"AS ABOVE SO BELOW".

Physicists discover that the structure of a brain cell is the same as the entire universe.

"Oh God, guide me, protect me; make of me a shining lamp and a brilliant star." -- Abdu’l-Bahá

Yes, this litteraly shows that WE ARE THE UNIVERSE...
The universe is within us all, all things are reflections of you,
we are one. Really an Eye opener! Permalink Reply by drago kulic on February 2, 2010 at 2:34am
THANX BEN BROTHER, FOR THIS WONDERFUL DISPLAY,AND VIDEO........I JUST, LOVE THE WAY YOU, INTRODUCE, INFORMATION, TO ALL,SO WE CAN BE TOGETHER, IN HARMONY...CHEERS BRO.

Permalink Reply by Yancy Morgan on February 2, 2010 at 3:31am
brought tears

Permalink Reply by Eddie Servant of the Servant on February 2, 2010 at 5:17am
The subtlety of spiritual concepts becomes more pronounced as one starts to penetrate the mystery
of the cosmos. The axiom "as above so below" or the microcosm and the macrocosm-----dives deep into this mystery!!!
Indeed--- the structure of the microcosmic brain cell- discovered by the Brandeis University student bears a striking resemblance to the above marocosmic snapshot of the present universe featuring the galaxies, stars and dark matter.
There is an important difference. That difference is QUANTITY

Just like a drop of ocean water in its chemical constituents bears the same analysis of combinations as the entire ocean.
BUT the drop is NEVER equal to the whole ocean.
Similar is essence --- BUT--- different in quantity.
In Sanskrit this philosophy is called achintya- bhedabheda- tatva--- simulataneous oneness and difference.
This is inconceivable to the mind--- because the mind is not unlimited--- it is bound by time and space.
The mind is vast and powerful but it is not everything.
To say we are one is part of the truth. We are one is essence with the universe---- but we are a tiny universe
compared to an unlimited( from our perspective) vast expanse of cosmic space.
Forget NOT that the drop of the ocean does not make the entire ocean.
Our miniature cosmic existence does not equal the entire cosmic existence.
We are one in essence--- but different in aspect.
Never will there be a point when our microcosmic existence will equal the whole universe.
Sometimes the microcosmic consciousness attempts to merge and become ONE with the whole entire universe.
This is artifical like the drop of ocean water thinking that it has become the whole entire ocean.
The brahman existence has eternity and knowledge --- sat and chit---
but the ananda or the bliss factor becomes available in the relationship between the small spirit to the big spirit. 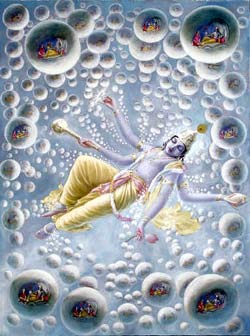 Permalink Reply by InfinityStarr on February 2, 2010 at 6:56am
Magnificent, Inspiring and Stellar!

Permalink Reply by Teddy on February 2, 2010 at 8:40am
Very profound and inspiring. Thanks Ben

Permalink Reply by Heidi Stadler on February 2, 2010 at 9:04am
this is amazing, thank you!

Permalink Reply by Lara on February 2, 2010 at 10:57am
About 6 months ago Master Hilarion told me the Universe was inside me (I had just awakened, it was not easy to understand), now I know it is inside all of us, as we are ONENESS!

Permalink Reply by Vashanarana Sonia van Overbeek on February 2, 2010 at 12:47pm
Fantastic how it all comes together.....science is finally catching up.....Wow !!!!

Permalink Reply by Olidegam on February 2, 2010 at 1:10pm
"As above so below" very true
Every feature in the universe is also in our own body... the realized have told us this long ago... we should pay attention to that atleast now with such scientific proofs...
May Love and Light prevail

Hellen replied to the discussion 'The 'Secret Book of Alien Races' translated from Russian'
"Yes, I remember Valana and my sister gave that book she had purchased two or three books at the…"
9 minutes ago

Valana (Patti) replied to the discussion 'The 'Secret Book of Alien Races' translated from Russian'
"Hellen do you remembe what happened when someone gave you that book you told about...I believe it,…"
1 hour ago

Alan liked amparo alvarez's blog post THE MOMENTARY CHOICE YOU MADE TO EXPERIENCE SEPARATION IS ABOUT TO BE REVERSED...
1 hour ago

Hellen replied to the discussion 'The 'Secret Book of Alien Races' translated from Russian'
"  I apologize if someone anyone misreads my story if one is confused about it. I…"
1 hour ago

Alan commented on the blog post 'NEW MOLECULE CAN HARVEST ENERGY FROM ENTIRE VISIBLE SPECTRUM OF LIGHT - AND THEN TURN IT INTO HYDROGEN FUEL...'
"Very promissing stepping stone to other forms of Energy desperately needed.  "
1 hour ago