There was a report the other day that Flight 777 was shot down by the US Navy who thought they had intel suggesting plane had been hacked. You know about the a the malaysian airline that flew over ukraine and got shot down- Now this one;

The search operation for the missing AirAsia Flight QZ8501 has been halted for the night, but big ships won't return to shore and will leave their searchlights on, according to the Indonesian Transportation Ministry.

Before communication was lost, one of the pilots asked to fly at a higher altitude because of bad weather, officials said.

The aircraft, flying from the Indonesian city of Surabaya to Singapore, went missing as it flew at 38,000 feet over the Java Sea between the islands of Belitung and Borneo -- a heavily traveled shipping channel with shallow waters, according to Indonesian authorities, who are leading the search and rescue operations. 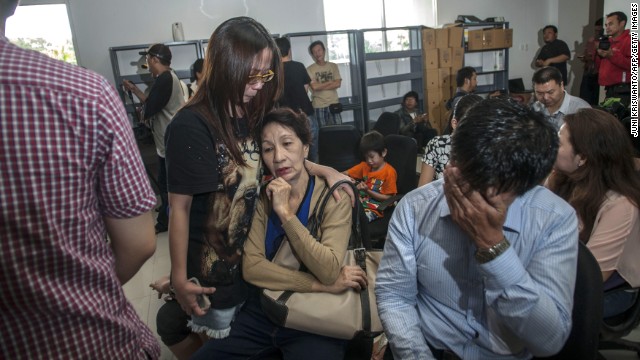 Plane was on common route

"The plane has lost contact at 06:17 a.m. local time," the Indonesian Transportation Ministry's acting director general for air transportation affairs, Djoko Murdjatmojo, said. The aircraft disappeared from radar observations at 6:18 a.m., he said, and air traffic control officers monitored the presence of the plane until 7:55 a.m.

Of the people on board the Airbus A320-200, 155 are Indonesian, three are South Korean, one is British, one is French, one is Malaysian and one is Singaporean, the airline said.

Seventeen children, including one infant, are among the passengers, the carrier said. Seven of the people on board are crew members.

At the airport in Surabaya, loved ones gathered and wept as they waited for any word on the passengers.

Some took cell phone pictures of a flight manifest posted on a wall. The black-and-white papers showed every passenger's name and seat number, but not their fate.

Others simply sat and dabbed tears from their eyes.

"Thank you for all your thoughts and prayers. We must stay strong," AirAsia Chief Executive Tony Fernandes said on Twitter, adding thatthis is his worst nightmare. He traveled to Surabaya, where most of the passengers are from.

As word spread of the missing plane, the airline changed the color of its logo on its website and social media accounts from red to gray.

Pope Francis prayed for the missing, according to Vatican Radio.

Flight 8501 "was requesting deviation due to en route weather before communication with the aircraft was lost," the airline said.

The flight's captain asked permission to climb to a higher altitude, Murdjatmojo said, according to the national news agency.

According to flight tracking websites, almost the entire flight path of the plane was over the sea.

First Previous of 3 Next
This reply was deleted.