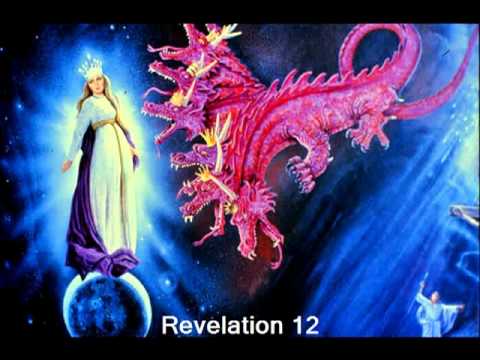 You have probably heard that Jesus will come and 'kidnap' Christians, flying them like witches to who knows where. Then as they 'marry' Jesus in the clouds, the earth is plugged into darkness, with a leader termed 'antichrist' reigning supreme. Also, you might have heard that Pope is infact the anti-christ,i or that the anti-christ infact came long ago and we are now leaving in the 'new earth' and 'new heaven' talked about in the book of revelation. All these confusions comes from a failure to understand the book of revelation. The book is challenging to understand it in its luxury of details. But it is not too hard to get a good glimpse that is enough to dispel most of the nonsense like we saw above.

The main revelation of anti-christ begins in chapter 12. It is here also where John gives us an hint as to how to interpret the book, an hint tacitly ignored by the interpreters like in above. John gives us a revelation that we can easily identify it with an historic events that begun to happen in the past of the author. But the revelation does not give a one to one correspondence between itself and the historic events. We can identify the woman with Mary and the dragon with Herod. However, we cannot then make sense of the crown she is wearing or the seven heads of herod. Since the author obviously understood that Mary was never a queen, and that 'Christians' are not the descendants of Mary, we understand that the historic fulfilments of his revelation is not a one to one correspondence. If we took the revelation as to have been foretelling of Herod's attempt to kill the infant Jesus, then we will falsely conclude that it was a failed prophecy as Herod did not proceed to hunt Mary in an attempt to harm her.

We say that the 'fullfilment' of revelation 12 is a one to two, or more correspondence. That means for every one element in the vision, there are zero, one, two, three etc elements in history. Identifying the woman as Mary does not mean that there is no other entity that John was alluding to and symbolizing it with a woman. This, we get from John himself, thanks to chapter 12! This may be the general nature of the apocalyptic genre that was understood in those days but we are no longer familiar with. The writers of the NT definitely understood apocalypses this way. Take for instance the prophecy of Daniel. While we can clearly identify 'the horn' it talks about with Antiochus Epiphane, Jesus talks of it as an event that is yet to happen!

We must also be open to the possibility of failed prophecies as to have been the motive behind the invention of this confusing style of apocalypse. In case prophesies about what will happen to Mary fails, the author has a clever loophole! We simply take what was fulfilled and push the unfullfiled aspects to some unknown future, or 'too difficult to understand' riddles! This appears to be the case in Revelation (but not in Daniel, the pioneer of apocalypse style). In other words unlike John, Daniel never hints to us that he intends his visions to have one to two correspondence etc. The NT writters just presumed so, once the apoclypse style had been concocted as an ad oc to explain failed parts of prophecies. But this does not mean that John is doing this intentionally to creat a loophole!

With this, we can now understand the visions better. Just as the woman does not allude to Mary alone, the son does not allude to Jesus alone and the dragon does not allude to Herod alone. The woman also alludes to Israel. The son are its kings in general and the dragon alludes to the gentile overloads who were always trying to 'prevent Israel from having a son of David on the throne' ever since the kingdom was destroyed by Nebuchadnezzar. The woman with moon under her feet is just the age old dream of Israel rulling the whole world under the banner of 'kingdom of God'. During the time of Antiochus, Daniel tells us that 'messiah' was supposed to come and established the 'kindom of God'. (So that the woman may have the moon under her feet). Revelation tries to create an ad oc to explain why this did not happen. The 'war in heaven' alludes to the battle in priesthood during the famous Hanukkah wars where Israel emerged victorious, as recorded in the books of Maccabees. So the dragon ( in this case Seleucid Empire) 'was thrown from heaven', wherein 'he had grown up to' as written in Daniel. In other words the Jews used 'heaven' to symbolize their sanctuary. So when Antiochus entered and disegrated the sanctuary, he is depicted in Daniel as to have 'grown up to heaven' and 'thrown some of the starry host to the ground' and 'trampled them under foot'. (Daniel 8:10).

So clearly, John also intends to take us back to the Hanukkah wars. This obvous picture is missed because of failure to discern the non one to one correspondence nature between John's visions and history. So the son seeming to allude to Jesus wrong foots Christians into thinking that everything that comes afterwards alludes to NT era!

The 'war in heaven' lead to the re-consecration of the sanctuary. (The dragon lost its place in the heaven ). The dragon nevertheless 'persuaded the woman' in the sense that the kindom formed, which was supposed to be 'the kingdom of God' as per Daniel, was actually a kingdom by priests, or levites rather than the sons of David or Judah (so the son was 'snatched up to heaven' rather than rulling on earth). This begines from Mattathius himself who was a priests. He forms the Hasmonean dynasty rather than the 'kingdom of God' as promised to David. In other words someone (the priest ) who should 'be in heaven' (the sanctuary) is now 'on earth'. (the 'earth' is the world kingdoms).

The Hasmoneans having rose to power and difeated the Seleucids almost immidietly negotiated with Romans, which  was the major blunder that would make Romans conquer Israel. In other words 'the dragon stood by the sea shore', waiting for the beast (Roman Empire) to rise. Remember that the 'dragon' alludes to the corrupt priesthood that was behind Antiochus defiling the sanctuary and had now plagued Israel and reduces the priesthood office into 'kingdom' office.

So we see that we understand how chapter 13 follows seamlesly from chapter 12. The hasmonean dynasty paves way for Roman Empire, following the Hasmonean deals that effectively 'gave the power to the beast'. Howerver, if we think that chapter 12 alludes to the events only in NT, ie around the birth of Jesus, we cannot make sense of all these details. What, for instance, was 'war in heaven' that seems to come prior to 'the rise of the beast', yet 'the beast' was supposed to be already there when Jesus was born? Also, note that Herod replaces the Hasmonean Dynasty and so when he tried to fight Jesus, we can still understand 'the dragon' doing the same thing to Jesus, that it tried to do to 'the son of David' following the Hanukkah wars! In other words after the Hanukkah wars, messiah was supposed to come (the child was about to be born). But a 'ferrousious dragon' (the corrupt priesthood) was 'standing just next to the woman'!

Revelation chapter 17 gives us the clear interpratation of 'the beast'. This is because we know that John was writting this at around 70th AD. So the five fallen kings begun from Augustus all the way upto Nero, the fifth. The beast who was, is NOW not and yet he will come was Nero. We know this because Early Christians were among those who believed that Nero will come back and possibly be the eigth emperor of Rome! So Nero would be the eight emperor but also one of the seven. He was 'fataly wounded' and yet the wound healed. Also Nero is known to have persecuted Christians the most. So this prominent figure amongst Roman Emperors is clearly Nero.

Agrippina was the master of wickedness, the Jezebel of Rome! She was trying to control the empire through what is closely like prostitution. Her marriages were of pure conveniences. She sought after the most prominent of figures in Rome. Finaly, she marries an emperor and seduced him to adopt her son, Nero as the next emperor! Then she murders the emperor and enthroned her son. All she intended was to turn her son, Nero into her puppet. So if Nero was the beast, Agrippina was clearly ridding on his back! So promiscuous was Agrippina that she is said to even tried to seduce her own son for sex! Remember that when you ride a horse, you are trying to stear it to move where you want, rather than where it itself wants to go. This is what Agrippina was trying to do!

But we know that Agrippina's attempt to control Nero failed miserably! Nero together with top individuals in the empire came to hate her so much. They conspired together and killed Agrippina. They burnt her body at the dinner place as if to want to eat her!! So we see that indead John was also alluding to the prostitude Agrippina, mother of the antichrist in chapter 17, to contrast her with the virgin mary, mother of Jesus in chapter 12!

Views: 52
E-mail me when people leave their comments –
Follow

"If you want to determine how trustworthy I am, you can ask me a question that you already know the answer. Ask me, for instance, 'where is your home', and then see if I will lie. But then there is a prerequisite for this to work: You must know that…"
More…
Loading ...