An airline passenger recently captured footage of strange UFO orbs over Atlanta, Georgia, USA. What do you think they are?

I looked it up, AO, apparently the jury is still out but the video came out a couple of years ago and was recently rebooted by alternative web sites: Here is some more info:

The original poster of the video is uncertain, but the oldest version available online is one posted to YouTube on June 3, 2013 by UFOFilesTV. The video apparently went largely unnoticed at the time. But since the YouTube user News24x7 reposted the video on April 13, 2015, UFO/conspiracy theory websites and discussion forums such as Disclose TV, Abovetopscret, Godlike Productions, and news sources, including Yahoo and MSN have reported on the video.

The video appears to show three UFO orbs flying in a roughly triangular formation. According to the video description by UFOFilesTV, the footage was shot from inside a plane, as it prepared to land in Atlanta.

Unfortunately, UFOFilesTV volunteers only very little background information about the source of the footage that could allow an objective assessment of its authenticity. But according to the YouTube user, the unidentified cameraman first thought the orbs were the lights of an airplane, but began filming when he realized they were not. He said passengers also speculated about the lights.

Viewers have debated what the orbs were. YouTube viewers who believe the video is a hoax argue that the cameraman was filming lights being reflected from inside the plane.

“What it is… is a deliberately filmed hoax… the lights being a reflection from inside the plane.”

“It is a reflection on the glass that’s for sure. I laughed so much.”

“Reading lights on the plane reflecting in the window.”

But most viewers did not think the footage was a reflection hoax. In response to the theory that they were lights being reflected from inside the plane, some viewers drew attention to the behavior of the orbs towards the end of the video when one of them detached from the group and flew straight out of sight.

“Reading lights wouldn’t run upside down and individually dive towards the ground.”

“Either lights from inside the plane deliberately manipulated for the intentional hoax… or added in with a video editing tool.”

This skeptic, however, seemed to be alone among believers willing to accept the video as authentic.

“I just got back from Atlanta today, as we drove into Atlanta last night we saw those same lights. There would be 4, the suddenly 3 and they were just hovering. Came home tonight and googled strange lights in Atlanta and found this…”

“I saw this over Turner Stadium on 6.8.13 only days after this… in windy semi-cloudy 12:06 a.m. sky. I heard no sound and it was flying, floating or sailing low to the stadium.”

But it is not possible to determine that these testimonies are genuine.

wow, how wonderful!!!!! I as well have had visits from those unseen. i love them and they are my family. I want nothing but love and Joy for them as I do for all of us. Love to you all

Has anyone found an explanation yet for why none of the other passengers on that plane reacted to this phenomenon?

I believe when something big happens for ones kinship it should be celebrated.  Just as you dear Charlotte if something big happens for your kinship it should be celebrated. But be mindful of respect for others not being boastful of ourselves but humble ourselves for we are all of one great spirit none better than the other I celebrate all of you because you are a part of me and I you. I love you all as you are loves pure light. All the hurt pain and rage amongst us all must cease.  That's why et won't visit because why come to a world in which there's so much hate anger jealousy just to bring them down to that level. Its our boastful pride in ourselves that stop us from rising instead release our pride in ourselves to pride for others and see how far we go.

The scoutship photo was taken in the USA......

"What amazed me was that as it materialized it had a white aura around it that quickly dissapated," the witness stated.

Definitely Sirian scoutships, no question about it....Vashtar has also confirmed that more than one camera filmed them....so we may get more perspective shots, at some stage....maybe on YouTube and/or stills...

I normally do not comment on the multitude of other ET visiting craft, unless asked or invited to......BUT, will always comment on the craft of my own space kin....The Sirians from B4 and B3....

Sirian scoutships are not disk-shaped, as the many Pleiadian and Zeta ships are....

Sirian scoutships travel in triad formation.......They have ramped-up their programme of fly-overs and fly-pasts, also......

Here is a photo of a Sirian scoutship, which is not obscured by the powerful ionised plasma field, which envelops the hulls in a white glow.....as seen in several YouTube videos....

Note the spherical shape, the positron beam emitter at the top, plasma foil around the centre and implosion reactors at the base....

Here is a rendering of Sirian Nordics, in their distinctive white jumpsuits.....The ship in the background is more of a Pleiadian design, however.... 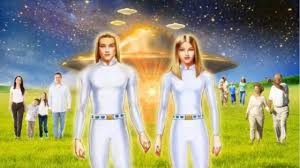 Here is a photo of an actual Sirian ship...with the plasma field far less in density, around the hull...

they doing a formation activation code, they way the space craft at triangle formation, We all know formation of triangle mean creation , higher vibration..... Any symbols we do in sky with spacecraft activate a vibration to next dimension, including ultra reality,,,,,, Set the vibration for each dimension, Shift or turn on feature...... hm than spaceship disappear at the end.........  :) :) :)

Drekx Omega commented on the blog post 'DIVINE MOTHER SPEAKS OF VULNERABILITY PARTS 1, 2, 3 AND 4 OF 4 (MEDITATION - HEALING EXTREME VULNERABILITY AND ISOLATION)'
"A very important lesson, in this time of global "health fears," being artificially…"
31 minutes ago

Drekx Omega replied to the discussion 'Coronavirus patients no longer infectious after 11 days, comprehensive study finds… perpetual lockdowns not based in science'
"This whole virus narrative is about the US election, in America and extending the Brexit…"
2 hours ago

Alan liked amparo alvarez's blog post THE 9TH ARCTURIAN COUNCIL: YOUR ARE THE STARSEEDS AND GALACTIC GROUND CREW
6 hours ago