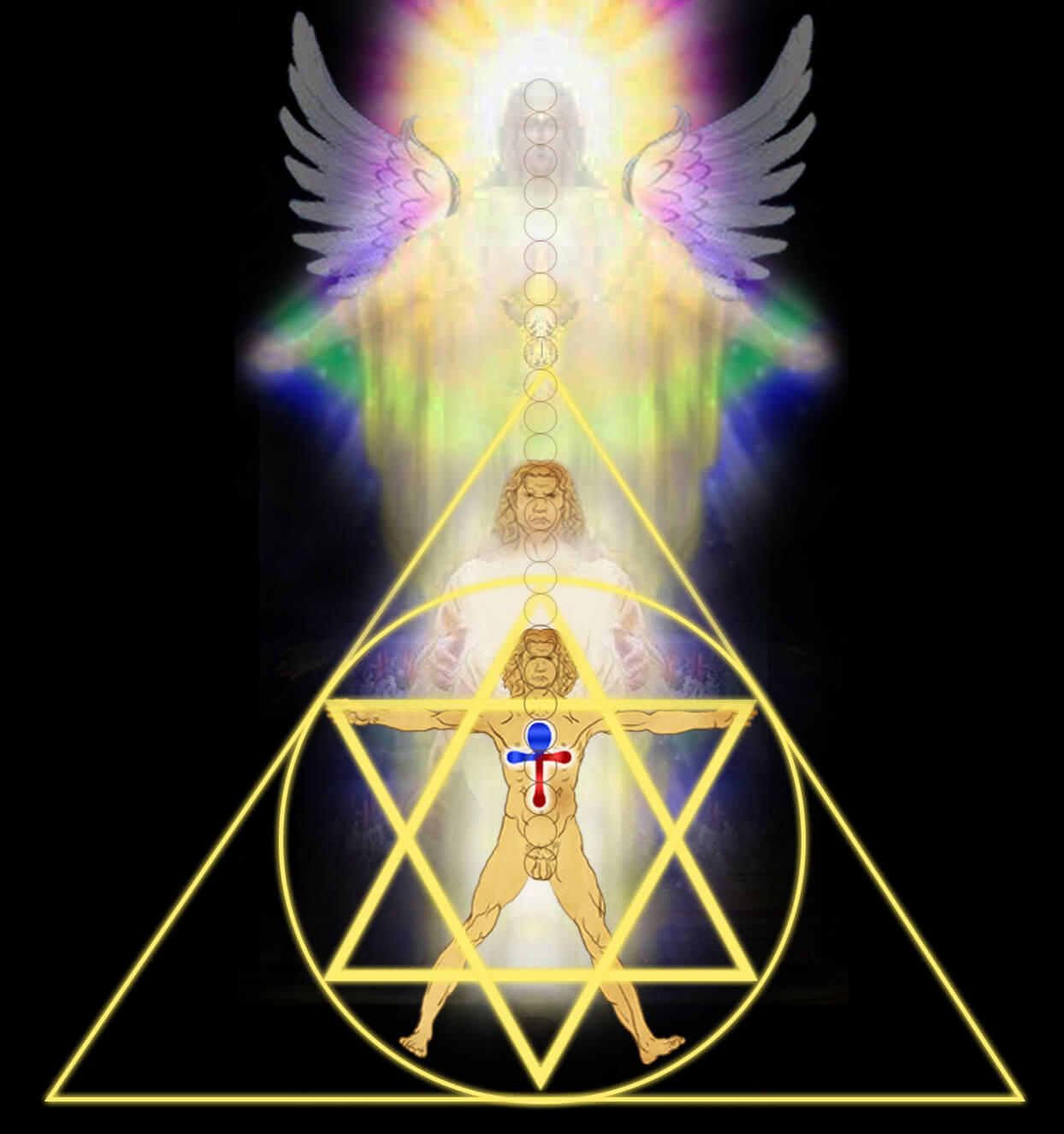 Thou Art the Light & Love of God… Manifest!

How far-fetched does this sound? As far as you are, from the truth of it.

This is a representation of the energetic & astral construct of every human being. It is understood to the degree of a person’s luminance, of The Holy Spirit of God within. Surprised again? that The Holy Spirit of God could be within you? Well, that’s you! The one cloaked in so many veils, that reality itself seems unreal.

Most people just see themselves as the lowest person in the picture above, a physical being in a physical world being influenced and so reacting and expressing themselves in the ordinary physical reality. But now is a special time on our planet (the ascending age of Dwapara Yug) that brings a higher intensity of cosmic light to all. It is causing the activation of spirit molecules (one’s lightbody), and physical DNA in an increasing number of people, who are now getting a feel of a higher aspect of themselves called the ‘Higher Self’. It is a consciousness that is much wiser, much lighter, more loving, more empowered, and a much higher degree of every human value.

A few have begun experiencing something even more - the Higher Self of The Higher Self, known in esoteric terms as the Monad or Angelic Self. It is a level of divine vibration and energetic being that holds great wisdom and an expansive view of everything. These people are holy, for a very high degree of divine light and consciousness streams through the physicality of their being from their higher lifestreams. Unfortunately, it is just their physicality that is seen by most. The inner eye sees more.

Frank introspection shows that each one of us is at a different stage of evolution in consciousness, perhaps only understanding, appreciating and dabbling in the level that we are at. Where you are now in consciousness, depends of your stage of evolution and life-mastery. If your life has misery, strife and struggle, it shows that much is still to be learned and lived. The ones who have evolved enough, are content, balanced, loving, creative and even helpful… even in today’s world, where struggle and violence are commonplace. Being at peace in isolation in the mountains or the forest is not life-mastery, it is escapism.

So how do such varying degrees of evolution happen for people? And why do some progress continuously, whereas others get stuck? Well, it is combination of many things. To start with, one’s soul family origin and their age in the grand cosmos, their experiences over lifetimes, the way energy and consciousness moves in their physical body - which is also dependent on how clean their lives have been in terms of thoughts, words, deeds, their daily environment, the kind of food they eat, the kind of work do and the time they spend exploring their multi-dimensional selves to understand its true form, function and expression.

Are you wondering about where you are in your own evolution? It always seems that you’re at a Zenith! That is a normal human feeling, for if it was not, many would have felt unsuccessful & depressed along the journey of life. But one must strive to see what’s beyond, for only those who seek, will find. Who you see now and interact with, depends of the level of your vibration. If you do not increase your vibration, you may never meet higher beings where you go. They may be there, but you won’t see them. They are upto much good now, so finding them will help you do good too.

There are different degrees of embodiment of the Holy Spirit of God, and some are so low that in comparison they can be called dark or even evil. This may be hard to understand for those who have not realized that ALL of creation is God’s. God gives space and opportunity for participation to ALL. Look at the reality you are living in. It is proof enough.

Your Higher Self is also known as your ‘I AM Presence’. It is your truest connect to higher consciousness and to God. You may love your physical gurus, for they have given you so much. Yet, the only good work they do is connect you to your ‘I AM Presence’ that does the rest of the work for you. Ascension is not about going up. It is about streaming down higher degrees of vibration and consciousness into your-self and living those vibrations. There is a New Earth being formed now, one of higher vibration, and you could choose to be an important part of it if you are ready to.

Thank You for reading this writing. It has transmissions of consciousness that are with you now. Much Love & Many Blessings!

For more understandings, please visit www.fromthealphatotheomega.com, or come to www.meraevents.com/event/alw

Views: 154
Tags: am, ascension, consciousness, enlightenment, evolution, higher, i, presence, self
E-mail me when people leave their comments –
Follow