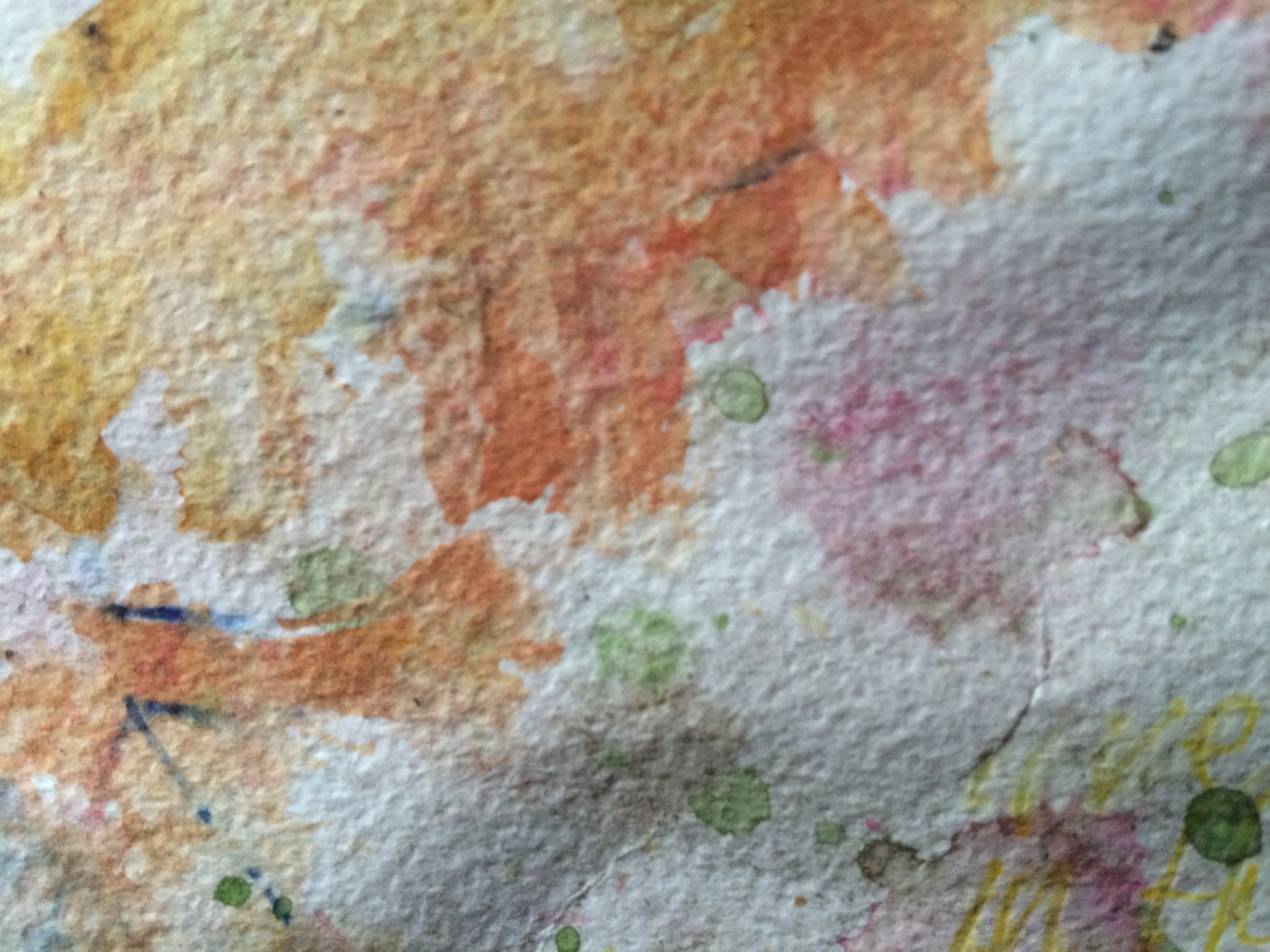 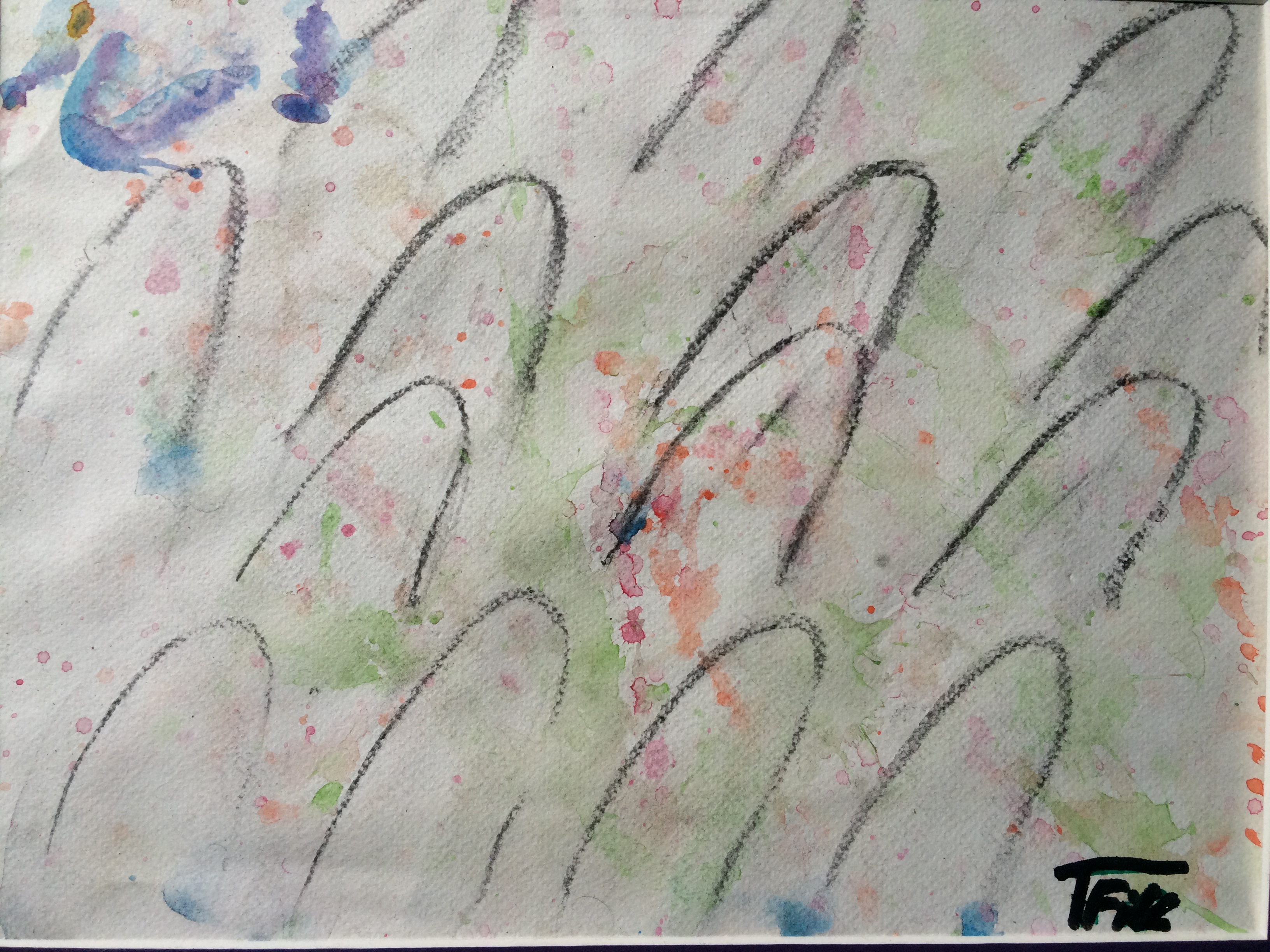 These three paintings were done in August 2012, during the Persedes meteor shower. There also appeared to be a moon impact, it was the night when Usain Bolt won gold in the 200m. The day after there was a lot of omens in the clouds, later it began to rain. At the time I was listening to the Christian radio, it said it was time to whitewash the gravestones. I had a flash of inspiration and decided to collect some rainwater and thought I would ask god to empower a cup containing the rainwater. Then I took a piece of paper and drew some gravestones in charcoal then got some water-colour paints and the rainwater. I also mixed some of the rainwater from the cup in some mixing solution, which I liberally painted it on the paper. Dipped my paintbrush in the cup chose a colour and flicked paint at the paper, repeated the process just over a dozen times, with various colours. Then sat and looked at the painting. After a few seconds the painting came alive, like a supernatural cartoon.
At first it became a shield. Then it showed me a river that had a dog like character to the side of it which appeared to be talking. Obviously, I couldn’t hear what it was saying, and I didn’t have any voices in my head, but I guess it was talking to me through the pictures. Then the picture changed into a shield. Next it showed me a man in a captain’s hat, in a dock surrounded by books. I painted a bird in the top left comer expecting it to walk around or something, but it never did. Then it became a shield for a final time before it loosely became the image it is now, but it was animated. The torched clown was straining and the dog character wearing green sunglasses was blowing kisses at me. Its lips were getting bigger and more exaggerated and the clown continued to strain. I thought it was taking the mickey, so I wafted my hand at it. After a second it ceased to be animated and it became the form that it is now. The main part of the image, the centre. Shows a tortured clown with a big red nose and his gritted teeth, with spit coming out the side. This image if you look at it slightly differently shows a bull or even a sheep. Then in the centre where the clown’s nose is it is the lip of the dog’s mouth, its waring green sunglasses. Behind him is an alien type character with a painted clowns face. When I was displaying it one time someone said to me is this the image where every part of it means something, so I'll let you decide on the rest. The next images I'm afraid are slightly affected by me, as I had a large cup of rainwater, and a big ambition to paint all day.

The next image, I fancied some love in the place, so I painted a big pink heart. Little did I know that when I sweepped the mixing solution over one side it would give me the image you see now when you consider how I arrived at this result its very clear and very detailed. Its salt or oil for a very controversial subject.

I couldn’t resist the symbolism, but at this point I was quite high, and the image had been very matter of fact. Without realising I was running out of painting time, I decided to draw a pack of cards and a gun. Painted mixing solution over the whole painting. Then flicked paint on the paper. It stared to flash up lots of different images of faces, just for a few seconds at a time. I painted symbolism and wrote on the painting as it flashed. I finally came to rest on this face underneath the gun. It’s very small, and it was difficult to do it justice with the photography. It shows the mask of a monster with the nose cut off, and an old man with a beard behind it.

In hindsight if I knew that I only had time to paint these three then I would have taken a different approach. I'll try again when the pesedes come through, if the conditions are right but I think it might have been the moon impact that was special. Since I found it might be the cups and I'm looking for omens in the clouds 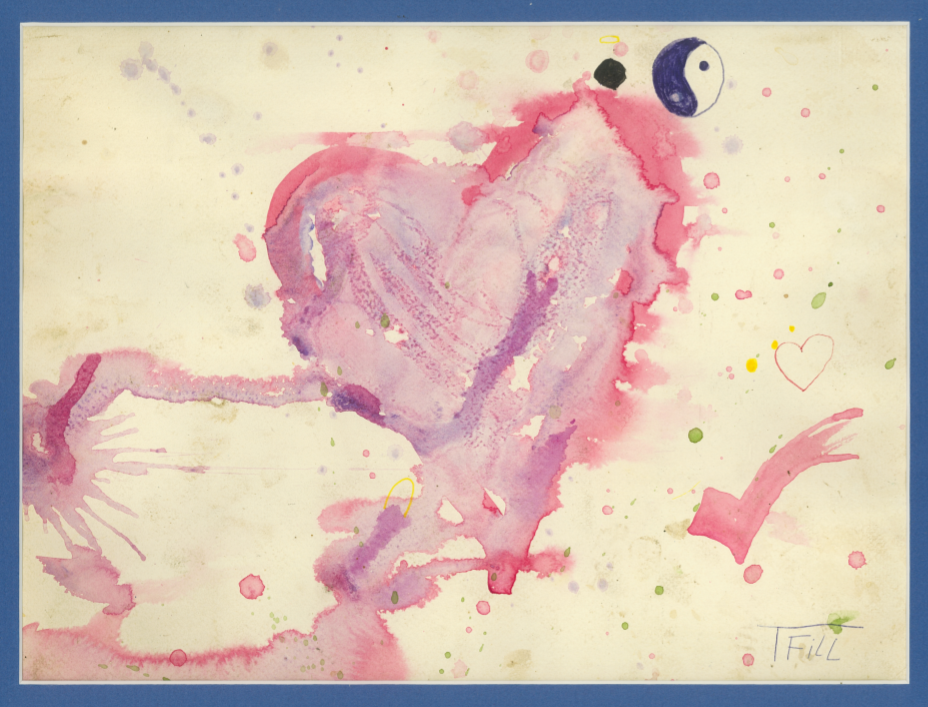 "Also I don't see how manipulation of taxes by politicians, together with manipulation of interests by central banks is a 'free market'. The pple are not free to or not to pay taxes, for instance."

"I don't think there is an historical examples in all cases. Specifically, an example of a successful 'tax cut' during inflation. It is not hard to understand how tax reduction might boost growth if the country is in a deflation. But during…"
More…
Loading ...