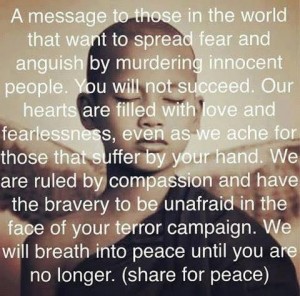 Thanks to Erica
I’m again outside the transformed state and back to work.

The unmasking of the Paris false flag continues. I’m not going to be following it in detail.

Lightworker blogs are showing how foreign nationals in custody were killed and replanted back at the scene at the Bataclan. In the case of a Mexican national, she phoned her boyfriend from custody and was alive and unharmed.

Then some time later she was dead, carried back to the Bataclan and placed on the floor. And the fact that a Mexican national was killed was subsequently played up. Other foreign nationals were allegedly also killed for the same reason. (1)

Other blogs are revealing the business ties some crisis actors have to the Rothschilds, etc. (2) The unmasking of this black operation is proceeding apace.

I’m personally convinced, from my experiences yesterday, that our best way forward is to remain aware of whatever disinfo is exposed while at the same time not allowing the “dark oligarchs,” as Sheldan Nidle called them most recently, (3) to arouse us to hatred of Muslims, fear of later events, or hatred of the cabal.

Oh, here I feel the first stirrings of bliss again, as I write. I hitch a ride on them, allowing them to fill me up.

So a committed conversation, such as this one, can cause the bliss to stir.

The elite are attempting to set our agenda in two ways and it’s our task, I think, to sidestep them as a matador sidesteps a bull.

The first way is through the Paris Massacre itself. We’re expected to be horrified, blame Muslims, and ask our governments to protect us. That then allows them to suspend or whittle down our civil rights.Paris 55

Here it’s important for us, not to forget the tragedy itself, but to ignore the scenario of control that the elite are trying to establish from these events. If we simply go on about our business, ignoring them, the energies and the White Hats, whose intentions Sheldan has discussed, will take care of containing the cabal.

The second way they’re attempting to set the agenda is to lock down Paris for the climate conference. Without protests to distract or disrupt them, the cabal would then pass a climate-change package that would provide the control mechanisms they can later take charge of and use for civil control.

None of this long-term strategy is going to occur (the White Hats and galactics will prevent it) so, while we withdraw our support and attention from their machinations, we also need to not go into fear thinking that the cabal is going to take us over. A Divine Plan is being acted out and the dark’s actions cannot succeed in the face of it.

I imagine I’m being assisted from the other side to feel the bliss right now so that I can write about it for the good that that produces. Consequently, I give my attention to it and fill myself up with it, in order to rise like a bubble to surface in the blissful state.

The bliss is right there. I don’t have to go looking for it. But I do have to give my attention to it if I wish it to expand.

I breathe into it. Gradually it re-asserts itself and I’m again in the transformed space – not as strong as yesterday. I’m not seeking a strong experience. I was unable to work yesterday because of the impact of such strong bliss and I need to work today. But I allow a mild experience of it for the sense of well-being it brings and the elimination of worry and concern.

Cosmic Awareness and Sheldan Nidle have given their reports. I await Matthew’s before looking at all three of them.

Views: 81
E-mail me when people leave their comments –
Follow