The accelerating movement of the Magnetic North Pole from Canada to Russia is a precursor of a catastrophic, civilization-ending geophysical pole shift in which the crust of the planet slips over the core. In this month’s most recent measurement of the magnetic pole position, it moved 5.44 miles – a rate of just over 65 miles per year. And the rate of movement is accelerating. Gene, the scientist measuring and reporting on this movement on his Maverickstar Reloaded channel on Youtube – believes that we are fast approaching what he considers a crucial point. After 40 degrees of movement, he assumes a major change will occur that will directly lead to this magnetic excursion becoming a catastrophic pole shift. (This is similar to the conclusion of the RAND Corporation, as described in Ken White’s sought after book, World in Peril.)

"Unlike our geographic North Pole, which is in a fixed location, magnetic north wanders. This has been known since it was first measured in 1831, and subsequently mapped drifting slowly from the Canadian Arctic towards Siberia. One of the practical consequences of this is that the World Magnetic Model has to be updated periodically with the pole’s current location. The model is vital for many navigation systems used by ships, Google maps and smartphones, for example. Between 1990 and 2005 magnetic north accelerated from its historic speed of 0–15 km a year, to its present speed of 50–60 km a year. In late October 2017, it crossed the international date line, passing within 390 km of the geographic pole, and is now heading south.

A weak magnetic field in the South Atlantic Ocean, known as the “South Atlantic Anomaly,” already adversely affects our planet and could be an indication of what is to come. The European Space Agency’s Swarm satellites measure the strength of Earth’s magnetic field. In this image - The large dark region is called the South Atlantic Anomaly.

The spacecraft-killing anomaly over the South Atlantic A strange dent in Earth’s magnetic field doses orbiting craft with high levels of radiation. It's caused everything from periodic glitches to total mission failure.


"Recent geological studies have suggested a possible reason for the anomaly. It is widely believed that our Moon was formed when Earth was struck by the planet Theia 4.5 billion years ago, but the remains of Theia have never been found. It now appears that the remains of Theia may lie beneath our feet. There are two huge volumes of rock buried deep in the Earth, each one millions of times larger than Mount Everest (and expanding) and denser and hotter than the rest of Earth’s mantle. Scientists suggest that these rock masses are the missing remains of Theia and that they interfere with the convection of molten iron — giving rise to the weak magnetic field in the South Atlantic". - (https://astronomy.com/news/2021/09/when-north-goes-south-is-earths-magnetic-field-flipping)" 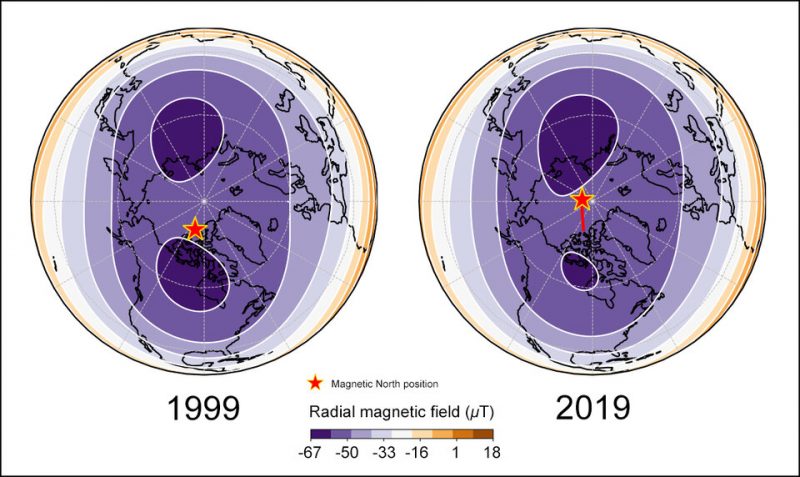 Tussling magnetic blobs deep below Earth’s surface appear to be at the root of the phenomenon of rapid magnetic pole drift since the 1990s. Image via ESA. 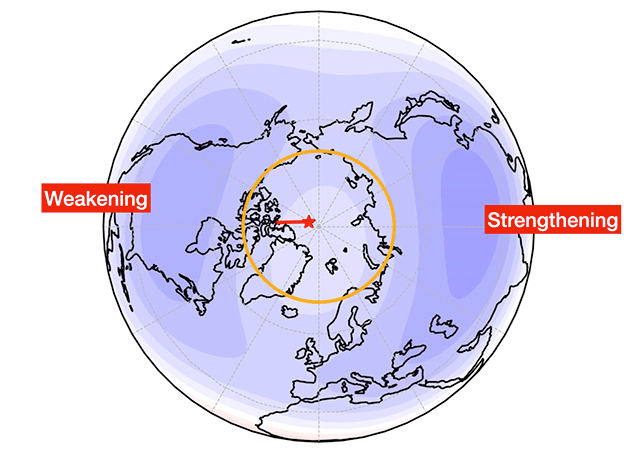 At present, the Siberian blob appears to be winning in this magnetic “tug of war.”

By analyzing magnetic field maps and how they change over time, we can now pinpoint that a change in the circulation pattern of flow underneath Canada has caused a patch of magnetic field at the edge of the core, deep within the Earth, to be stretched out. This has weakened the Canadian patch and resulted in the pole shifting towards Siberia.

Researchers believe that this could be a sign that the poles are about to flip – and the consequences could be “dire,” according to some scientists. If a flip happens, it could knock out power grids, alter the climate, and expose us to solar winds that could puncture the ozone layer. 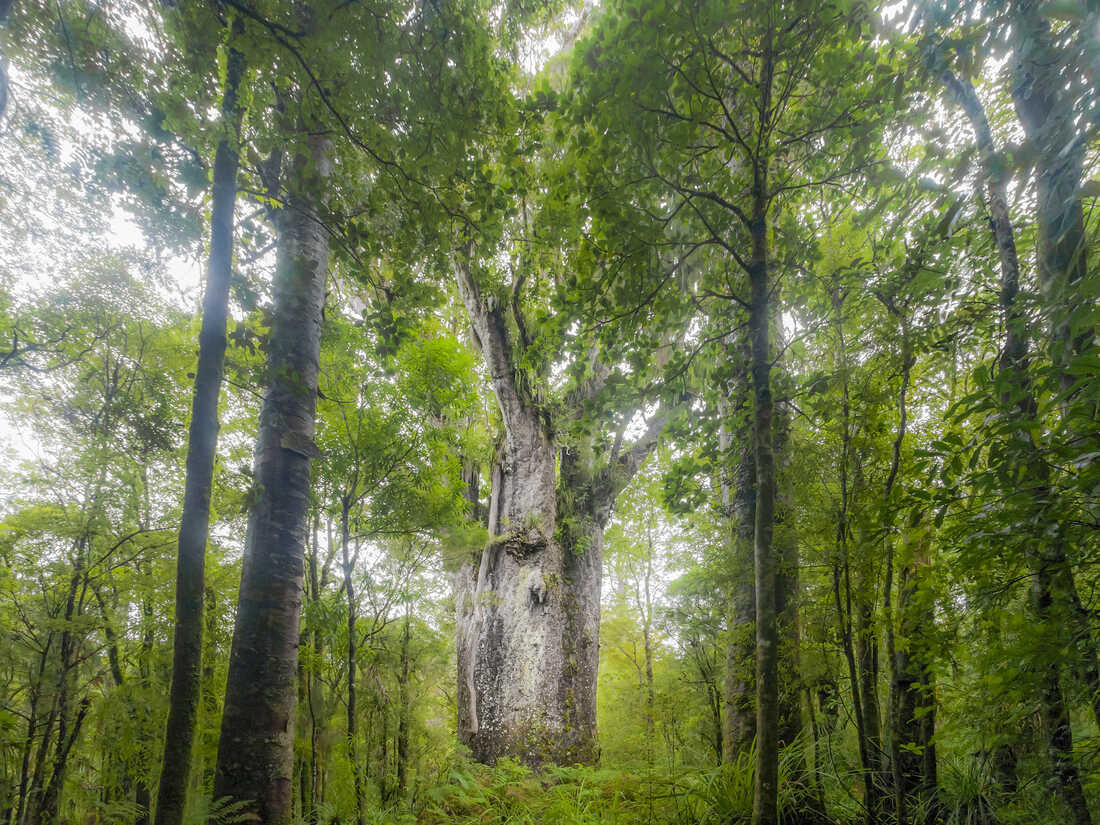 A giant kauri tree grows in Waipoua Forest in Northland, New Zealand. Trees like this one that fell long ago and were preserved for thousands of years are helping researchers discern fluctuations in the Earth's magnetic poles.

An ancient, well-preserved tree that was alive the last time the Earth's magnetic poles flipped has helped scientists pin down more precise timing of that event, which occurred about 42,000 years ago.

This new information has led them to link the flipping of the poles to key moments in the prehistoric record, like the sudden appearance of cave art and the mysterious extinction of large mammals and the Neanderthals. They argue that the weakening of the Earth's magnetic field would have briefly transformed the world by altering its climate and allowing far more ultraviolet light to pour in.


This reversal is called the Laschamp excursion, after lava flows in France that contain bits of iron that are basically pointed the wrong way. Volcanic activity back then, during the flip, produced this distinctive iron signature as the molten lava cooled and locked the iron into place. Iron molecules embedded in sediments around the world also captured a record of this magnetic wobble, which unfolded over about a thousand years.

"Even though it was short, the North Pole did wander across North America, right out towards New York, actually, and then back again across to Oregon," says Alan Cooper, an evolutionary biologist with Blue Sky Genetics and the South Australian Museum. He explains that it "then zoomed down through the Pacific really fast to Antarctica and hung out there for about 400 years and then shot back up through the Indian Ocean to the North Pole again." - https://www.npr.org/2021/02/18/969063568/ancient-trees-show-when-the-earths-magnetic-field-last-flipped-out

The magnetic pole shift effects on weather will start with massive floods. Oceanic floods are one of the most catastrophic events that will happen during the magnetic pole shift. Once the magnetic power of the earth becomes less powerful it will create several low and high magnetic power zones, these will affect not only the oceans but also the tectonic plates. Scientists claim that most coastal regions will be flooded while others will gain coastal land, as for which one of these events will happen in any particular place is unknown as the actual movement of the pole shift once it hits a certain point will be unpredictable.

Earthquakes caused by the pole shift

The magnetic core of the planet also affects the tectonic plates, these will be probably the early warning signs in addition to floods. These earthquakes will be small in scale in the beginning, as the pole shift unfolds they will be more and more powerful and scientists do not exclude a super earthquake or even several of them. The most affected area will be the ring of fire which is in the Pacific ocean hugging the coastlines of North America, South America, China, Russian, and Australia.

As the earth is devastated by floods, tsunamis, volcanoes, and massive earthquakes the carbon reservoirs in the bottom of the oceans may be suddenly released. At best this will speed up global warming, at its worst in a big enough concentration carbon monoxide could kill almost every living creature on earth. Carbon monoxide poisoning is very dangerous as it is colorless and odorless, once a person notices something is wrong it might be too late.

Short-term changes in the Earth's magnetic field that occur over periods of just years or decades have now been shown in new research to have a very close relationship with changes in gravity. The research focused on a specific area, stretching from the Atlantic to the Indian Ocean. In this area, changes in the magnetic field correlate very closely with variations in gravity. The researchers concluded that this means that processes occurring in the outer core have an influence on gravity.

Gravity affects the flow of blood through the brain; this begins to affect the brain’s electrical activity, producing patterns that resemble epileptic seizures.

"When the poles shifted, the consciousness of the Earth plummeted, the electromagnetic fields of Earth collapsed and for some days everyone went into the Great Void. Our memories are held together by electromagnetic fields and connectyed to each cell with their own field. Although the population survived, they had no knowledge of anything higher and began at square one" Drunvalo Melchizedek

Views: 711
E-mail me when people leave their comments –
Follow

"As far as I know, the so-called Taliban belong to the Sunnis.The Hazaras belong to the Shia. I have heard that the Sunnis want to practice Sharia and are strictly religious. The Shias are not that strict.…"

""The 1815 eruption of Mount Tambora was the most powerful in human recorded history, with a Volcanic Explosivity Index (VEI) of 7. It is the most recently known VEI-7 event and the only unambiguously confirmed VEI-7 eruption since the Lake Taupo…"

"The Hunga Tonga volcanic eruption was catastrophic for Tonga, YET, it could have been more powerful, if the Sirians had not moderated the Solar Minimum effects upon the atmosphere and plate tectonics...
The previous Grand Solar Minimum saw a greater…"

well are you still going to these fast junk food joints ..still???Find out and use your intelligence: https://truththeory.com/dangerous-chemicals-in-fast-foods-and-plast...
See More

If you Enjoyed this, Please Subscribe to Kerry K  Did you hear the question the Universe asked you? It's been asking you for a while now, and chances are you have been asking the universe to answer you without even realising that it's waiting on…
See More

"The link doesnt work ....would love to read about this article as I use a microwave daily."

"Is it ok to hold a clergyman and his congregants hostage just because he feels like it and wants to speak to his sister who was convicted of terrible crimes?"
More…
Loading ...