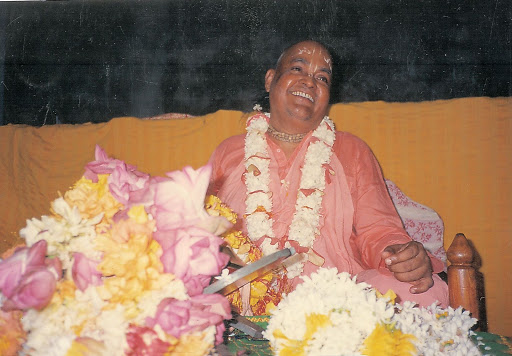 In Mayapur on 9 February 1996, the holy appearance day of Srila Bhaktisiddhanta Sarasvati Thakur, two senior ISKCON devotees requested an appointment in the early evening to see Gour Govinda Maharaja. They inquired, "Why did Chaitanya Mahaprabhu stay in Jagannath Puri?" He enthusiastically began to explain the confidential significance of Mahaprabhu’s pastimes in Puri. He described the pains of separation felt by Radha and Krishna when Krishna was away from Vrindavan. He gradually unfolded the pastime to the point where Radha and Krishna were finally united after Their long separation. He described how Krishna became so ecstatic upon seeing Radharani that He manifested a form with big round eyes and shrunken limbs, Lord Jagannath. At that time the devotees noticed that tears had come to his eyes and his voice had become choked up. Barely audibly, he said, "Then the eyes of Krishna fell upon the eyes of Radharani. Eye-to-eye union." Unable to continue, he apologized with folded hands, "Please excuse me. I cannot speak." He then gave his final instruction: "Kirtan! Kirtan!" The devotees present began to chant as he calmly lay back on his bed, breathing slowly and deeply. Upon his request a servant placed a picture of Gopal Jiu in his hand. Then, gazing lovingly at that picture of his worshipable deity, Gour Govinda Swami said, "Gopal!" Then his eyes closed and he lost external consciousness.

Just before sandhya arati a devotee came to my residence and told me that Gour Govinda Swami was having some problem breathing and could I come to see him. When I arrived, Maharaja was lying down. Some doctors had come before me and had said that Maharaja had already passed away. Others were saying that we should take him to Krishnanagar and give him treatment in the Government hospital. I took his pulse and found that he was still alive.

I told them, "Just wait. Give me another twelve minutes time, then I may tell you to take him."

If they would have taken him to the Government hospital it means they would have been pumping his chest, thinking it was a heart attack. However, according to his pulse there was nothing wrong with him. His pulse only showed that he was taking rest. The Ayurvedic science teaches how to diagnose a patient by taking his pulse. If something is wrong we can feel it. But I never found anything wrong with Maharaja. According to his pulse everything was normal.

By the second or third time I read Maharaja’s pulse it had become clear that he had left. Some say that he had a heart attack, but if someone dies from a heart attack generally we find that they suffer a lot. They also generally have some previous history of a weak heart. In Maharaja’s case, none of these things were there. Maharaja had the symptoms of asta-sattvika-vikara, ecstatic transformations, on his body. One kind of vikara is that one doesn’t want to stay here any longer, they want to go back to the spiritual abode, back to Krishna. Nothing in Maharaja’s body failed, he just left. I am 100% sure of that. I’ve never seen this kind of death before.