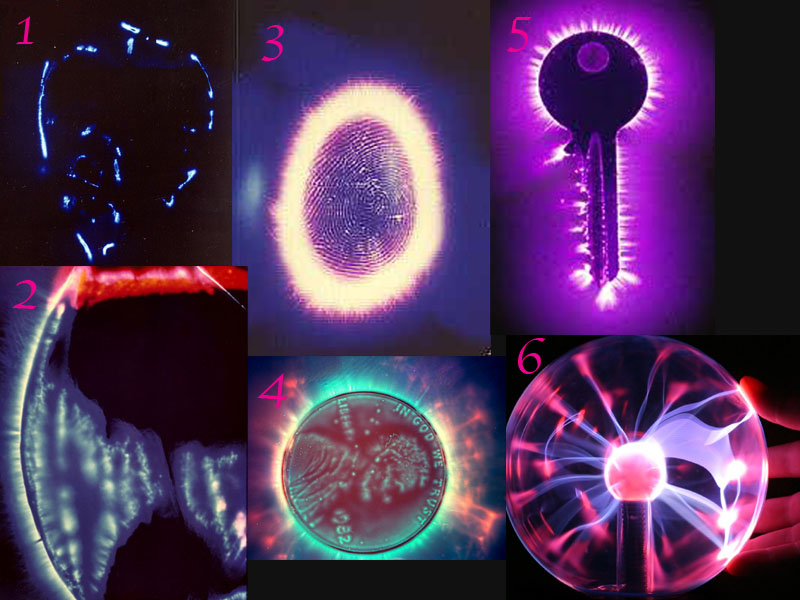 Kirlian photography was once correctly understood as a photograph of auras surrounding objects. However, thanks to the foolish definition of 'spirit' that merely take science out of the picturesque without telling us what 'spirit' is. All a sceptic had to do is link the Kirlian photograph to some known science. Then he effectively move the goal post away! One such a kirlian photograph showd a 'disembodied spirit' surroundind a Leif. Then they did the experiment again but without moisture in the area around the 'disembodied spirit'. When they found no picture of the 'spirit', of course they concluded that the earlier on image was not of 'spirit' but of water. They use the 'spirit-matter' dilema that the 'new agers' hammered it so firm.

So you may think that had they found out that pictures of 'auras' are found even when we take a picture of 'vacuum', they would eventually conclude that auras indead exist around objects. However, Delbruck Scattering shows that this would not be the case! Even if we found images of auras in vacuum, there would still be scientific explanations! What we must do is simply cease using the 'inexplicable by science' definition of 'aura' and other 'spiritual' phenomena. Such is not what the ancient people who coined the word 'aura' meant. They simply meant 'invisible entity surrounding objects'. So to them, Kirlian Photographs proves their point. Delbruck Scattering is a bonus.

Literally Delbruck Scattering is a reflection of light off a light body that surrounds every electrically charged subatomic particle. It is a 'light-light' interaction. We can understand light as ephemeral separation of ekectric charges that is propergated like a wave in vacuum. Such is how James Clerk Maxwell understood light. When the charges 'snaps back' is what he termed as 'displacement current'. So space is understood not as 'emptiness' but as to be compossed of particles of opposite charge. In case of Quantum Field Theory, we call such a vacuum 'matter-untimatter potential'. That is to say that at any moment, should energy be absorbed in space, a pair of matter and untimatter will be created at the spot. Should the pair unihillate each other, the energy will be released from the spot. Such is how light energy gets propagated through space. So we can easily call the ephemeral seperation of matter and untimatter 'dynamic light' and the permanent seperation of matter and untimatter as 'static/frozen light'.

Delbruck Scattering is then possible because, surrounding every subatomic particle (hence surrounding every object) exists a 'frozen light'. Essentialy, the vacuum surrounding objects is 'polarized'. It is a litteral light body. When the light body surrounds a living thing, it must, itself, be also living. This is because this body mirrors the visible body. Wherever there is charge, let us say cell membrane potential, there is corresponding charge in 'vacuum' due to 'vacuum polarization' surrounding every charged particle forming the membrane potential. For the whole body, there would be a pattern of charges in vacuum that are mirror symmetrical to the pattern of charges in the visible body. Since the body is just a pattern of charges, the vacuum polarization aura around a living body is also a living body on its own!

But the most interesting case is 'disembodied aura'. Here, i will draw for you an analogy. Consider the technique of recording sound using the magnetic tape. Literally the tape is a matterial that enables an 'aura' to develope around the writing head of the tape recorder. The sound exists as a pattern of magnetic poles. So rather than 'electric charge polarization', which is the vacuum potential, we have 'magnetic polarization'. The tape is a 'magnetic potential' in that at every moment, we can create a magnet in the tape. Vacuum, on the other hand is the 'electric charge potential'. Sound is recorded due to the simple fact that once we form a magnetism in the tape by 'polarising' it, the magnetism persist even after we remove the polarizing head. In other words the recorded sound is the 'disembodied aura' of the writting head. But it is not that difficult for this phenomenon to generalise to every polarization. It may be the case that any polarization persist even after the polarizer is removed. Such is the working principles of memory. The 'empty space' surrounding neurones might be what give rise to 'neural plasticity' hence our memory.