So I was out today in the nice weather and took my bike out on small roads on the countryside here in Sweden. About halfway through the trip my eyes caught something white sitting at the side of the small road and looking my way, as if it was waiting for me. I got eye contact with this white-squirrel and it took me some really good time to figure out what creature it was because until now I had never ever seen or heard of white squirrels in Sweden.

As I got close like 1-2 meters of it the squirrel got scared and scurried off into the bush. Still not knowing what creature it was (at first I thought it was a baby ferret or something because I think it's more usual that they are white) I tried to follow it with my eyes in the long grass until it finally popped up. I was frozen by this event so I didn't even think about taking my phone up and try to take a picture of it (and without a good zoom it wouldn't have been a good picture at all) and now I could watch it for a few good seconds when it stopped and looked back at me again before continuing until it disappeared from eye-sight.

I could see the typical tufts on it's ears and characteristic face of a squirrel, the way it sat and the tail made me 100% sure it was a squirrel too :)

The chance of seeing this is very very rare, and I haven't heard of anyone here in Sweden I know that have seen one, so I feel really lucky :) and the event of encountering it made me literally frozen and startled, because my brain could not find a fast way to identify what creature it was.

Now I know this might sound a bit absurd, but reflecting over it on my way home I was thinking that maybe it was a sign of some kind? It COULD be just a random coincidence that I was at the right place at the right time. But could it also have been the other?

I've heard of guides or angels that can disguise themselves as animals, but I don't know much on the subject. The fact that it was white is what really matters here. Would it have been a brown squirrel I would have just enjoyed it as the other animals I see. But this was such a strong impact on me, seeing something I did not know even existed.

And I say, even if it was not a sign or anything, it was a really awesome experience to have, so I'm grateful either way :) I love squirrels by the way, really cute animals!

Here is a picture of how it looked, almost identical! 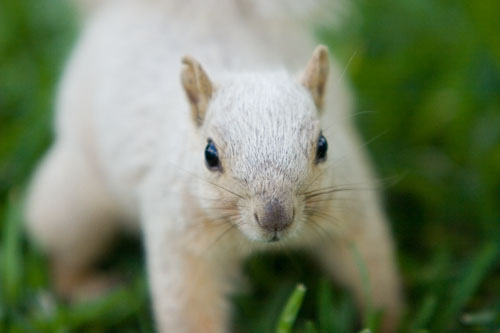 What do you think? :D

Views: 410
E-mail me when people leave their comments –
Follow