VERY STRANGE ...Author Of Dystopian Classics Predicted 'Use Of Face Masks To Enforce Conformity' 70 Years Ago

Respected German author Ernst Jünger predicted the ubiquitousness of face masks to enforce conformity and uniformity in a dystopian future society in a novel called The Worker that was published nearly 90 years ago. 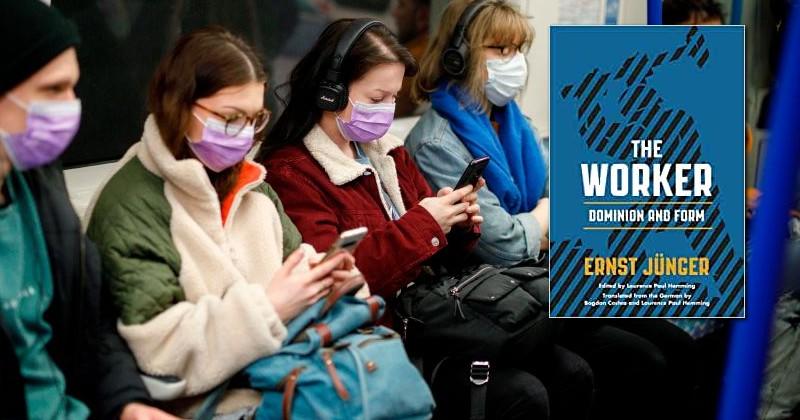 With face masks now becoming a mandatory part of the “new normal,” the enforcement measures to make people wear them, by both agents of the state and members of the general public, are becoming more dehumanizing and draconian.

This is precisely the scenario envisaged by enigmatic German author Ernst Jünger in his 1932 classic.

As Thomas Crew details in his article The Dystopian Age of the Mask, the “eradication of all individuality” is a running theme of all dystopian literature.

This is expressed by George Orwell in 1984 when he describes the masses as, “a nation of warriors and fanatics, marching forward in perfect unity, all thinking the same thoughts and shouting the same slogans…three hundred million people all with the same face.”

Crew explains that this theme is dominant in Jünger’s The Worker, where, “The uniformity of the new age is symbolized…by the sudden proliferation of the mask in contemporary society.”

“It is no coincidence,” he writes, “that the mask is again beginning to play a decisive role in public life. It is appearing in many different ways … be it as a gas mask, with which they are trying to equip entire populations; be it as a face mask for sport and high speeds, seen on every racing driver; be it as a safety mask for workplaces exposed to radiation, explosions, or narcotic substances. We can assume”, he continues, with an eerie prescience, “that the mask will come to take on functions that we can today hardly imagine.”

Crew explains how the public has been brainwashed to believe that the continuation of life, no matter how stifled, atomized and undignified it may be, is the only consideration.

“Given the sudden ubiquity of the face mask in 2020, across the entire globe and in an increasing number of social contexts, it is impossible to avoid the conclusion that this is precisely the sort of development Jünger had in mind. Our readiness to obscure the face reflects the dehumanising tendencies that, for Jünger, underlie the modern period. It represents another stage in the degradation of the individual that became explicit in the First World War. Whether as a scrap of material on the battlefield or a cog in the machine of the wartime economy, the modern age has a habit of reducing the human being to a functional object. Everything “non-essential” – everything, that is, that makes us human – is blithely discarded.”

As we document in the video below, the level of compliance that governments and the media have been able to indoctrinate people to embrace means there is little need for police officers and security officials to enforce mask wearing.

A cowed public, whipped up into a frenzied lust for obedience, will do it for them.