3 years ago but-corvid-19 is raging in China and now cases are popping up in the US-but this article is about hitting the elec grid;

TDC Note – The original chart Deagel produced, just a few shorts years ago, showed the U.S. population dropping to 65 million now it is revised to 54 million. Deagel is one of those companies that operates in the shadows and, like Rand, with all of their “work” is done for the government – nothing for the private sector.

“You don’t remember the days after the blackout. No food, no water. Nothing but panic and death everywhere you turned.”
Captain Tom Neville, Revolution

Back on January 1st of 2017, Forbes published a story called “Fake News And How The Washington Post Rewrote Its Story On Russian.... For those who may have missed it, days earlier, the Post had sparked a wave of fear throughout America when they published a story titled “Russian hackers penetrated U.S. electricity grid through a utility..., a story quickly proven ‘fake news’ leading to the Washington Post to retract their ....

With that story proving to us the WashPo’s ‘modus operandi’, we shouldn’t be the least bit surprised that the Post is once again trying to pull a ‘Russian-hack-of-our-electric-grid’ out of their ever-expanding ‘fake news’ hats. As this June 12th story over at the Washington Post reports, hackers aligned with the Russian government have developed a cyberweapon that can disrupt power grids and ‘has the potential do be the most disruptive yet against the electric systems that Americans depend upon for our daily lives.

Called ‘CrashOverride’ by the researchers who discovered it, they’ve already blamed it for an attack upon a Ukrainian energy system back in December where hackers were able to briefly take down 1/5 of the electric power in Kiev.

According to Sergio Caltagirone, the director of the threat intelligence for Dragos, a cybersecurity firm that studied the malware and issued a ..., with modifications, it could be deployed against U.S. electric transmission and distribution systems to devastating effect. Also calling this malware ‘a game changer’, could it lead to a total catastrophe in America and 270+ million Americans dead? As we see below, the website Deagel.com has just made some major changes to its 2025 forecast for America, forecasting a population drop of 270 million within 8 years here.


And while ANP has long warned of the potential devastation that could be caused to America by losing our electrical grid, with some experts warning an extended power outage could lead to 90% of us or more dead within t..., the fact that this ‘Russian hacking’ narrative is once again being heavily pushed by ‘deep state propaganda’ Washington Post should send up a HUGE alarm to anyone paying attention. Especially considering their recent ‘fake news’ story about the exact same subject matter. Is a ‘false flag’ takedown of our electrical grid ahead as our videographer argues in the 3rd video below? 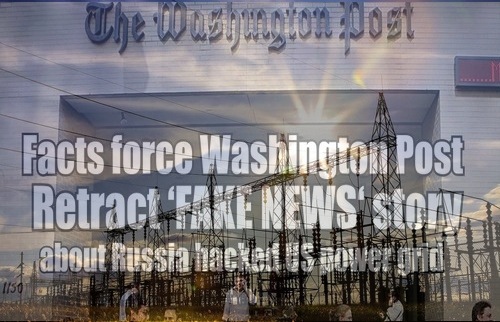 Imagine the average American waking up one morning without power and as the day wore on, no signs of power returning emerged. Like a scene out of the classic TV series “Revolution”, most Americans would have no idea what happened and no way to find out the truth with the internet down, along with everything else.

However, the average American would surely remember that Russia had threatened to take down our power grid (so the fake news Wash Po reported) and would quickly get behind any plans to go to war with Russia since they no longer have TV, a cell phone, a bank, ATM’s, stores, public transportation, credit cards, or any of the amenities of modern life. And just like the 2016 election and President Trump’s win, “it would all be Russia’s fault”.

Seeing the fakestream media’s Washington Post pushing the ‘Ukraine’ angle again should tell us all we need to know. For those who’ve forgotten, the ‘deep state’ here in America has long been in bed with far righ....

And while all of this has been happening, the website Deagel.com has quietly changed their forecast for America for 2025, lowering their forecast population numbers for America to 54 million by 2025, a drop of 270 million from the 324 million living here in 2016. What does Deagel know that we don’t know? Surprisingly, Deagels numbers are WAY OFF from what the US Census Bureau is forecasting for a 2025 population of Americ....

Why are Deagels numbers so different from those of the Census Bureau and why do they forecast such a HUGE drop in population for America? Interestingly, Deagels numbers also are forecasting a population drop of about 86% (VERY close to that 90% prediction in a long-term grid outage!) and as we’ve previously reported on ANP, Deagels sources ARE the ‘deep state’ and include the CIA, the Depar.... 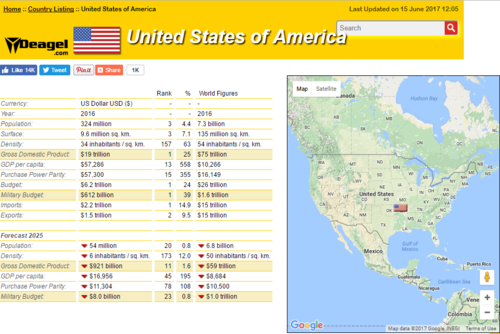 And just like in the TV show ‘Revolution’, should the US power grid suddenly and without warning go down, the fact that the Washington Post has been pushing the ‘Russia did it’ narrative on top of their never-ending-series-of-lies would prove to us that the Russians DIDN’T do it, and surely have no intention of doing it, but the ‘enemies of America within’ surely would.

Sending America instantly back to the dark ages, the warnings from Dr. Peter Vincent Pry of 90% of Americans dead could easily happen within the following year to 18 months, if it took that long. With most Americans completely unprepared for even a medium-length power outage, many with their heads surgically attached to their cell phones, the fact that nearly 47% would claim their cell phones would be one of their top ‘surviv... shows why death and decay would soon follow in American streets. As the completely clueless and unprepared panic, chaos and anarchy would surely rule if that worst case scenario unfolds, with even emergency responders unable to properly do their jobs without our 21st century technologies.

Hildegard Gmeiner is now a member of Ashtar Command - Spiritual Community Network
2 hours ago
Welcome Them!

Drekx Omega commented on the blog post 'George Soros Will Be ENDED By The Tide Of History - Karma Does Eventually Catch You Out, George..'
"DARKNESS TO LIGHT IS NEAR. Prepare for three days of darkness, followed by the day of LIGHT:…"
4 hours ago

Suiris commented on the blog post 'A plan to end the Crimes against humanity...is underway'
"Raise above evil? Misunderstood aspects of yourselves are what is called evil. Aspects in need of…"
5 hours ago