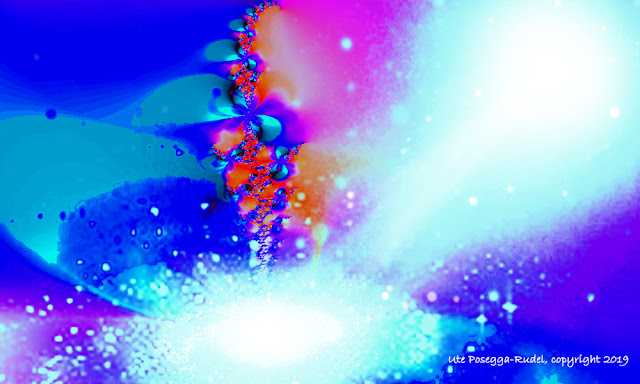 
MY DEAR FRIENDS,
for many of you it is obvious that life has become more difficult. Although, or better: because, immense Light is arriving here.
The forces who work against humanity are doing their very best to try to prevent ascension or Divine Awakening. We are in the midst of the last battle within the last battle. So what is difficult becomes even more difficult because they are now trying absolutely everything, pulling out all the stops on every possible battle fronts to keep humanity  in the prison state. But whatever they try - they cannot prevent Divine Awakening, according to the grand cycles of evolution.
But when exactly and how this occurs, depends on us, namely on each one of us with the understanding that the outer world unfolds according to what we hold within. This is the law of creation. The belief that outer forces would – boom - come to liberate us, to gift all of us with a benign world, depends on the goodness of the people. But millions of people still torture their own brothers and sisters, obeying blindly the orders of an inhumane authority. And this occurs on all levels of life and includes education, politics, finances, health, science, religion, sexuality … just everything. It is an artificial, toxic world of lies within a hidden divine world of truth.
From the science of quantum physics we know: we cannot see outside what is not part of our consciousness, because reality is being created by the observer. Who considers lies to be truth, creates untruth. They would not be able to see the Divine world, because they continue within the false dream.
Therefore only those who are living the truth from their heart are able to see it manifested in their world.
We ourselves are now called to pull all our own stops, with passion, love and trust and step out of the false matrix with the force of our higher will to realize our own divinity.
Remember: if there is a problem, there is also a solution!
Each one of us is presented now with an incredibly wonderful opportunity which most of us would probably not choose without being driven into the last corner! Yes, we are cornered within the world of lies. This is just a fact if we do not step consciously out of this reality or timeline. Because what they plan with the means of forced vaccinations and even worse, with 5G all over the planet, is a real thread for all life, and for us not only physically, but also emotionally, mentally and spiritually. When the deadly radiation is melting down our brain and nervous system, it becomes really hard to remember our divinity, - if we did not prepare for it.
Here we have to think in terms of frequency and information. Most people in this 3dimensional realm have still a dense body and its electromagnetic state is very vulnerable to the poisoning and life-denying frequencies of the 5G technology. But this is not all. Additionally the air is now filled with the tiniest nano-robots, which we are breathing in, particles that go into our blood stream and brain. They are created to respond to the technology of the hundreds of 5G satellites that are to cover like a blanket the planet from space. The plan is to create robots, if not to kill us.

My dearest friends, I do not want to create fear, but only to point to the reality, so that you can truly prepare.
As long as evil beings dominate our lives, it is not possible to make the present timeline - in which these threats are happening „better“ -, hoping that with some changes we all can be saved and safe.
The evil is in the energy and information of the timeline itself, in which these things are supposed to happen. This timeline itself is a replica of that evil.
But in reality it is about the battle within our own being and consciousness, the test whether YOU are willing to clean up yourself radically, to go through a process that transcends duality to enter into relationship with the non-dual Ultimate Divine Radiant Truth.

Who's consciousness is identified with duality is vulnerable to the forces within duality. And even if you experienced and know higher dimensions of bliss, you are still vulnerable. But the Eternal and Stainless Transcendental Spiritual Realm beyond duality can never be touched or destroyed!
This Truth is being alive in the deep of your heart, a Truth that transcends also cosmic duality. It might not prevent though your dense physical body to die, but it grants you Divine Freedom and Immortality, in Which you cannot loose your soul through artificial means. A Freedom in which you are un-born and where death does not exist.

Locating It, is the transcendence of the identification with the body-mind and becoming the identification with your True Divine Ultimate Nature Who you always have been. In Which you are Free of the bondage to conditional appearances.
This Freedom is the Divine timeline or the Divine Appearing in the cosmic realm, in which our Divine Aspiration becomes true.
How to discover Who You Truly Are! My dear friends, it is really about transcending the lower and contracted emotions, that are artificial limitations of your Being within the matrix.
It is really "only" about right and radical Feeling, Feeling into That Undying Infinite Radiance. Heart-Feeling beyond the body-mind and the cosmos and thereby all structures of creation. But you cannot do it as long as you are bound to lesser and conditional vibrations, because they appear to be so attractive to you!
Nevertheless, YOUR ESSENCE IS this Divine Being gifted with the capacity of Feeling (beyond mind) That is One With Ultimate Radiant Divinity! It is just that you never practiced It, that you allowed most likely many lifetimes to limit yourself to the expression of mere lower emotions, even if they might appear as bliss within the body-mind. This is the real prison you are being captured in, because you have been told that is all you are. It is the lie itself, in which you allowed yourself to exist.
It keeps you in a (even spiritual!) herd consciousness within a false, artificial light, powerless, yet in reality dark and unhappy in order to be consumed by the parasites whom you allowed to dominate you.
Your self-image is fake, my beloved friend, if you believe you are not able to BE What You Are.You are cornered now, because of this belief. It is the mirror of your false self-image. Now as a huge fata morgana it is put right into your face, which you cannot escape any longer. Because, beloved friend, you must wake up now!
If you do not believe any longer in the lies of the evil timeline, right down to the point of radical and true heart-feeling, the walls of your imagined prison will fall apart to open into Infinite Feeling of Radiant Divine Reality.
You, as a Divine Creation, are always creating yourself. It is your greatest and most wonderful creative power and creation! You are able to rise and stand up to Be the Freedom You Are, the One That IS Divine Reality, prior to the dark prisons of the mind. If you wait any longer, time is  with your precious opportunity running away.
Cornered to the point of no return, your true human power must arise now from the depth of your Divine Being, because you do not want to perish within false imaginations about yourself.
Becoming aware of the spotless Radiance of your Greater Heart that is beyond the cosmic heart, the paradox of the true Divine timeless Timeline arises. It is unconditional Truth, nothing conditional can harm You As That One, as you identify with IT.
NOW you want to arise as the God you Are, waking up from the dream beyond the play of duality. The forces of the parasites have played well, to help you to awaken!
With much love!
Ute

1 darkstar replied to the discussion 'Forget Drive-Ins: Paris to Host Floating Movie Theater With Socially Distant Boats on Seine River..COOL TAKE A PEEK'
"Still don't care for the social distancing thing - I think it's a bunch of BALONEY!"
5 hours ago

1 darkstar replied to the discussion 'Texas Health Task Force Doctor Claims He Found The Cure For COVID-19 The mainstream media is trying to suppress this information! Share this link!'
"Hellen:  Maybe one day war will end."
5 hours ago

Dr. SohiniBen Shukla commented on the blog post 'VLOG 174  HELP HUMANITY AWAKEN TO THE ONENESS OF ALL LIFE by PATRICIA COTA-ROBLES'
"Dear amparo, I have taken all her Vlogs and very very helpful for our work of Humanity ! Peace is…"
5 hours ago