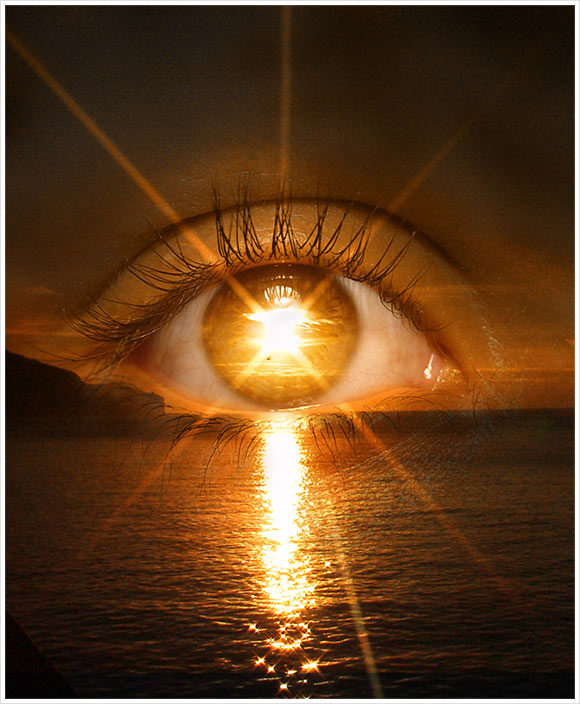 When one perceives and believes the “I” to be an “Individuated I”,  two separate “I’s”, hence leading to the belief and projection of a Me, She, He, They, Them, Etc., this then is what is translated into the experience as one of separation.  This separation and Not seeing as ONE,  is even seen  in the body of form, projected as the literal two eyes that we believe we use to see with in this projected world hologram, within the split mind that is used to create the projection.

Our TWO eyes literally represent and are an outward projection of our belief of separation itself… believing itself separate.  Seeing through two eyes.

I like to use experiences for teaching. If it is not experienced, then it remains only theoretical. So, stay with me, and then that which I am getting at, will come back around to this.  I share this experience as it corresponds with this topic.

Experience:  During a Regression Hypnotherapy Session, I saw and felt myself in the Light.  The Light that I was shown and felt I was one in, was purple. I felt and saw my own conception, of seperating from the Light into a fetus and then, was shown my own birth.  This was all very painful and excruciating.

So much so, that during the regression, I was in convulsions and in tears.

What was being shown to me during this regression, was separation from the Light and the pain that is felt by this.  At the time, I thought I was just being shown my inception and birth and at the time, I really didn’t see too much further beyond that idea… and as for the pain that I felt, I just thought that explained the reason why I have never felt grounded here or truly happy being human.  One part was correct, in that, the pain of separation, was indeed true…that was the contributing factor and the cause being the belief in Separation.

What I did not see at that moment, was that was a universal cause for pain and suffering for “every”-One of us who are projecting our thoughts as being incarnated “here”.

Good News is, that the projection never leaves the Source.

It is but a dream, like a movie on the big screen.  There is no one on that screen, it is but a mere projection and scripted story the author created and then projected running from a pre-recorded film (negative).

When we separated, we began our outward projection of me, he, she, they, etc., the projection and “Story”/Dream of Separation.

When we awaken to this, we begin to see the world for what it is and make the journey back into alignment to the I AM.

When the perceived Individuated I, the projected two separated I’s are realized with the I AM and return to the single, only and ONE I (Am), we return to the Divine Mind of One.

The Pineal is the Light of the I/eye.

This is the ONE Light in which we want to see ALL through.

When the Pineal is not receiving the signals of the Diamond Core God Cell within the Heart that is the Receiver Cell of the Divine Mind of ONE, it is in darkness, the biological brain computer of the biological system, functions in darkness. (Perhaps the word really should be does NOT function at all.  This then goes into other like topics, such as the reasons for death and decay.  When one is not in alignment with the Divine Mind of One, and it is functioning from the Ego Mind, death and decay are experienced.  Only the Ego Mind sees death and decay.

Metatron is the generator of the Source Light.

Through Metatron, he brings the Light Programs of Source/Creator /God, to ascend this lost consciousness time zone into alignment with The One Divine Mind.

When  the Diamond Core God Cell in our Heart ignites, it also ignites the pineal and illuminates our biological brain computer to receive the thought forms of the Light of the One… the Heart/Mind, the Divine Mind of One.

Visual:  You have a computer… and you tell the computer what to do.  Liken to our brains and us, the us that resides in the heart, the I.  The I needs to tell the brain computer what to do and not the other way around.  You are either Living in the Presence of the ONE, in alignment with Divine Mind, or, you are perceiving decay in a program on autopilot, a program of the split ego mind.  That said, even if darkness is your current perception, it is not what you Truly are.  You are the Light and Love of ONE and you will return your Mind to Source at your own moment of choosing.  For you cannot ever be truly  lost from that which you are, only hidden from it.

Ignite the Light within.  See ALL through the I (eye) of ONE.

Blessings of Love and Light to ONE and ALL,

Views: 107
Tags: am, all, ascension, cell, core, diamond, divine, eye, god, i
E-mail me when people leave their comments –
Follow

There is a law of forgetfullness,…"

"Where I agree with you Dreks, is on the systemic values of reincarnational growth itself. If a soul can still benefit from this, and has a clear connection to guides and loving beings - what is commonly referred to as the care package - then…"
More…
Loading ...