Yesterday this whole metaphor started to build up and connect in my conciousness. Before sleeping I thought that I'd write it down as best as I could today and this is the result. Let me know if you like it and if it resonates with you.

The bowl and the two apples

In front of me there is a bowl, and in that bowl lies two apples.
One of the apples is ripe, fresh and juicy. Wile the other apple is rotten and moldy.
I have tasted both so I know from now on which one is my concious pick; the fresh one.
However I don't approach the rotten one with a bad attitude and imagining it's not present.
Instead I acknowlege it's existence and know that it too used to be a ripe and fresh apple,
just like the one next to it.
It has just been somewhat distorted and clouded from it's natural state of being,
and if apples could return from decomposing to being rejuvenated to the state of ripeness,
this is what I would pray for to happen.

But not everyone knows how both of the apples taste.

Many have grown up having only ever known the taste of the rotten apple
and being convinced it's the only thing the bowl have to offer,
not even seemingly glancing at the fresh one when it's been there all time.

Many have been told lies about the fresh apple in favor of the rotten one,
so their natural pick is to continue to stick to the rotten one
while being held back from exploring the fresh one due to ones comfort zone by doing so.

Many have tasted both and still prefer the rotten one over the fresh.
Maybe because it's sometimes easier trying to fit in among the rest

while trading away your own  willpower, when it's all just a choice away.

What apple do you prefer? 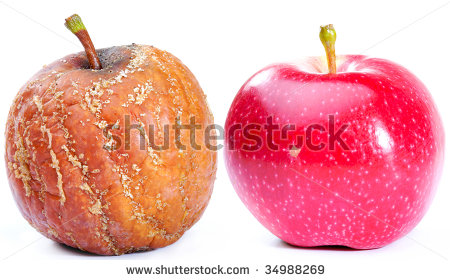 "Get fresh at the weekend! 😎

"For the Lightworkers! There is no shadow without light.
https://youtu.be/Tf6LFcgsGyw"

"I once dreamed of this ship. The crew waved at me and then took off. The people there looked like my family members. I saw the starry sky above them. The starry sky looked like the Plejardes star system. This Spaceship looks like a Cigar.
The…"

"I heard NATO is in for a surprise on the anniversary of the special military operation!
I can imagine Russia is about to spill the beans on the bio labs in the Ukraine, but we'll see :)"