Let's start, right away, with the story - no titles, no list of characters. I like that! :D

No one knows what's at the bottom
Whether you're young
Or old, big or small
No one's gonna stop you
If you've heard the treasure's call

Is it dark or mysterious
Or shiny and fun or maybe serious?
No one knows what's at
The bottom of it all

(Scene 1. TATIANA and BRIAN in raft.)

TATIANA
There's a rope and a weight here, Brian.

TATIANA
Yes, a shoe, but a heavy shoe.

BRIAN
And I see the rope's knotted.

TATIANA
No, I start at two feet and a shoe.

TATIANA
"Ms Hurwit." That's so silly, Brian. And, of course, in the meantime...

BRIAN
Ms Hurwit, will you have time to mind the bowl?

TATIANA
Why wouldn't I, Brian?

BRIAN
Seems like I should do it, Ms Hurwit. After all, you'll be at the bottom of the pond.

TATIANA
I'm not jumping in today, Brian. Today is what we treasure hunters call exploratory work.

Thus begins the story of fiesty Tatiana Hurwit and her loyal sidekick, Brian, in a world of wetlands treasure-hunting, dealing with a rich brat competitor, making peace with a goofy forest spirit, learning about science and statistics, and living it all out in song, song, song! 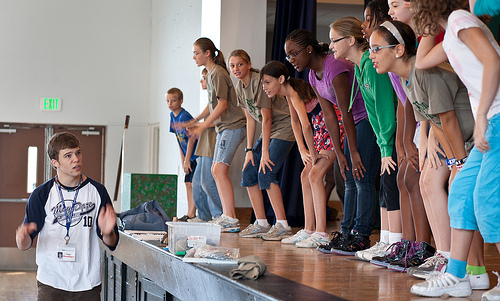 The fun began, for me, when I felt driven to write something educational and 100% fun for kids, in the form of a one act play. The story took me over and spit me (and a script) out in a mere seven days. "Wow!" I thought. "That was fun!" And, as soon as I finished reading the one act, all I could think was how amazing this would be as a musical.

That's when the opening line came to me.

"No one knows what's a the bottom of Greencool Pond...."

Another week passed, and I came down from the mountain with two stone tablets - Oh, wait! Wrong story. ;O)

I knew, as soon as I picked up the pen (The first draft was long-hand), that I wanted there to be almost too many songs. I was tired of musicals that only had an occasional song and were mostly talk, talk, talk. And, I knew that I wanted the songs to drive the story. I was tired of songs that seemed to interrupt the action, slow down the story, or that seemed to want to live outside the story more than in it.

And, I wanted spectacle and dance!

And, everything I wanted I got! YAY! Writing THE BLACKBERRY KIDS GO TREASURE HUNTING was a job from Heaven! And, best of all, I love the whole world of Pondside. I loved the heroic characters: Tatiana, Brian, and Rachel (a.k.a. Rocky) - the Food Co-op Refrigerator Door Weekly's reporter. And I also love the villain, believe it or not: Perky, the rich brat, along with that seeming forest spirit of ambiguous morality (and the villain's biggest fan) Mickel!

To me, they're ALL the Blackberry Kids.

I thoroughly appreciate having had the chance to field all those energies, and capture them on paper. Seeing the magic on stage - the very thought makes my heart swell!

I love being a writer! :D