...you, the ascending ones of Earth, will be re-connecting with the completeness of your male and female expressions by reuniting with your Divine Complements...When you first entered the third dimension, you had to choose a gender, for Earth was a polarized reality... as you ascend into the fifth dimension, your polarity of form will no longer be necessary...you can, if you choose, unite with the completeness of your androgynous, Multidimensional SELF.

RETURNING TO OUR
MULTIDIMENSIONAL SELF

I am Mytria, Keeper of the Violet Flame on Alycone, Pleiades,
and I am Mytre, Commander in the Ashtar Commander.

When you first entered the third dimension, you had to choose a gender, for Earth was a polarized reality. Therefore, it was necessary for your innate androgynous expression to choose a form of gender. Then, as you continued your many incarnations of physical Earth, you expressed yourself as either a man or a woman. Your Divine Complement has gone through the same process. Hence, both of you have had myriad incarnations of both male and female earth vessels. However, as you ascend into the fifth dimension, your polarity of form will no longer be necessary. Therefore, you can, if you choose, unite with the completeness of your androgynous, Multidimensional SELF. 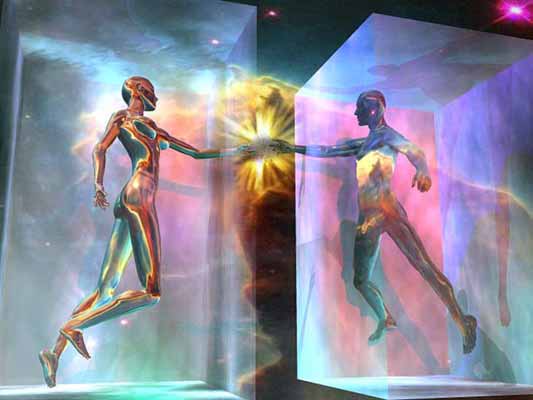 In order for you to fully understand what we are about to say we ask that you read with your multidimensional thinking. We introduced our SELF as our two extremes of feminine and masculine expression. It is true that you have perceived higher dimensional beings in male or female forms, as some of us, especially Pleiadians, still enjoy holding a masculine or feminine form. However, we are always intimately connected with our Divine Complement. Since time and space do not exist in the fifth dimension in the same manner as in the physical world, one of us can be on our Homeworld and the other in a Starship traveling the Universe without feeling any sense of separation.

We can do so because we returned to our true, multidimensional nature when we ascended back to the fifth dimension. Thus, we can experience two or more realities within the same moment of the NOW. In other words, we experience our life as ONE being who is experiencing two, in fact many more than two, realities at once. It is because of this last sentence that we asked you to think multidimensionally. In fact, we have come to you at this time to assist you in thinking multidimensionally so that you can more easily understand and fully participate in your ever-ascending reality.

We will BE telling you some of our experiences of ascension when we Pleiadians returned to our fifth dimensional expression. Unlike our dear friends the Arcturians, we are a civilization that very much enjoys the expression of a form. The Arcturians ascended long before us, but we remained in continual contact, as our civilizations have been inter-twined for longer than your time could count. In fact, many of our ascending ones on Earth have higher expressions, and ongoing lives/experiences, in both the Pleiadian and Arcturian worlds.

The concepts of life and expression have the same meaning to a multidimensional being, as we do not need to “be born” and “die,” as you do on a physical reality. Instead, we choose to engage in a certain form/reality until we feel complete with that experience. Then, we merely exit that reality, but remember every experience of every reality in which we have participated. We know that this extent of memory seems impossible to your third dimensional thinking, but we assure you that is consistent with all life forms of the fifth dimension and beyond.

Those of you who are awakening to your higher expressions, which are only “higher” to the perception of your earth vessel, understand what we are saying. For those who have not—yet—had that experience, what we are saying likely seems impossible. However, we want to encourage you to release the concept of “impossible” from your thinking patterns, as you are about to enter into a new life in which impossible is probable. For example, many of you are meeting a grounded one, or a higher dimensional one, whom you believe to be your Divine Complement or Twin Flame.

In some cases, you are realizing that your Divine Complement is one whom you have been close to for many years. In other cases, you may have a chance meeting with some one that you know within your heart is you Complement. Sometimes you are able to enter into an intimate and lasting relationship with that person, but sometimes that person must leave your life for a reason that is difficult for you to accept. If the second example is the case, it is often because it is important that both of continue your Reason for Incarnation alone.

In this case, you are both creating a pyramid of ascension by maintaining your physical connection via your consciousness while you both focus on your already united SELF in the fifth dimension. If this is the case, it is because you both made that choice before you took your present form. From your timeless state in the fifth dimension, a mere lifetime of separation was insignificant in comparison to the contribution that you would give to Gaia by anchoring your joint consciousness with each other and with your fifth dimensional unified expressions.

In fact, most of the sacrifices that our ascending ones have had to make were chosen before birth to either awaken you to your SELF and/or to assist with Planetary Ascension. As you continue to return to your timeless, multidimensional thinking, the hardships of your life so far will be erased from your memory. Only that which you have learned from these hardships is of importance to your ascension process. Hence, as a benefit of participating in Gaia’s ascension, you will find that fear-based experiences will begin to disappear from your memory.

These fear-based experiences will become similar to a bad tasting medicine you had to take. You did not enjoy the medicine, but you are happy that it made you well. In the same manner, your past hardships where chosen by your Multidimensional SELF to assure that unfinished business that had lowered your consciousness for myriad lifetimes, be resolved and released. Now that you have become the Victor of many of your past experiences of victimization, you can understand what we are saying.

Of all Her children, humanity was the most challenging. Her plants and animals never forgot that they were a component of Her form. However, humanity was so intent on gaining power-over others that they even chose to conquer the very form which allowed them to experience incarnation. We wish to tell you that Gaia is so happy that so many of Her humans have found their power-within and no longer need to experience power-over. In fact, as the darkness/fear is being released by Humanity, Her frequency is rising beyond the resonance of a fear-based realty.

We, along with Gaia, remind you again that the most important contribution you can give to Planetary Ascension is to REFUSE to participate in any form of fear. This includes all forms of anger and sorrow. This request is one that we could not ask of our ascending ones until your moment of the NOW. With the Eclipse, the return of dear Venus to our Pleiades, Venus’s journey between Sun and Earth and the myriad other Solar and Universal energy patterns entering Earth, our ascending ones MUST release that which is over in order to embrace that which is commencing.

We, the members of your Galactic Family, are HERE to assist your NOW!

Blessings from,
Mytria/Mytre of the Pleiades

Dr. SohiniBen Shukla commented on the blog post 'ARCHANGEL GABRIEL "THE POWER OF BLESSINGS" through SHANTA'
"Dear amparo, Shanta Gabriel is very very efficient and I love Her !! Sohini"
13 hours ago

Dr. SohiniBen Shukla commented on the blog post 'CREATING SOCIETIES OF LOVE, THE DIVINE FEMININE RISING'
"Dear amparo, Thanks for this beautiful message ! Sohini"
13 hours ago