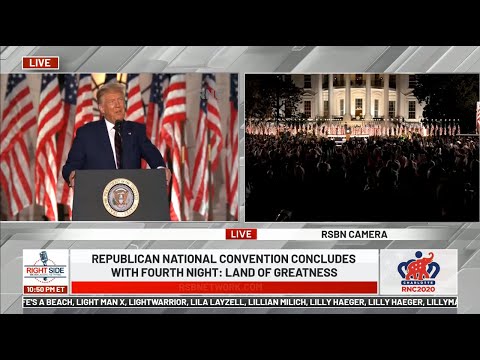 If you would like to listen to President Trump's acceptance speech it's above---no cutaways---from Right Side Broadcasting.

He confirms this will be the most important election in the history of America and tells what really happened when he took over in the White House. In addition to stating what he will accomplish in "four more years", he reviewed just some of the countless important initiatives he already achieved. The President also honored some of those who worked alongside him and his administration to make the remarkable progress possible despite the opposition from the old guard.

We're going to "crush the virus"---the "virus" being the lunatic left/globalist evil dark cabal/New World Order, and "save America's soul". He shot a few well-deserved arrows at Joe Biden and got a few laughs, as well. It was a good speech.

Worth repeating: how badly do the NWO want to rig the election? It's obvious, isn't it? They will do ANYTHING.

Acute Observer replied to the discussion 'CLONING ...How It Works'
"Cloning won't give you eternal life. It will just give New life to something that is not you…"
7 hours ago

Acute Observer replied to the discussion 'In Australia This Is What You Get For Saying 'Freedom''
"Indeed."
7 hours ago

RandyFirstContact commented on the blog post 'The violet flame- a gift to humanity from ascended Master Rakoczi (also known as Saint Germain)'
"Thanks for the lovely article Movella. For years I have used the decree - I am a being of violet…"
10 hours ago

rev.joshua skirvin commented on the blog post 'Qanon, Looking Glass and the Ascension Timeline: Could this Pandemic be Leading us to “The Event”?; VIDEO'S 09/18/2020 By Mickey Megistus'
"http://www.centerforhealthsecurity.org/event201/videos.html Of course,"
10 hours ago