Multiple fire commissioners from the New York area have passed a resolution calling for a new investigation into 9/11, citing the evidence of explosives. Sept 10, 2019 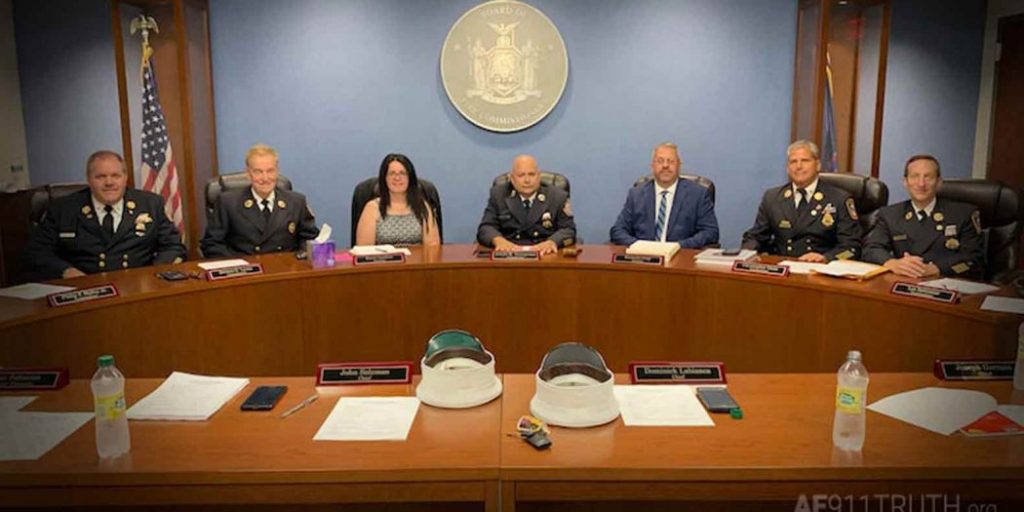 On July 24, 2019, the Franklin Square and Munson Fire District, which oversees a volunteer fire department serving a hamlet of 30,000 residents just outside of Queens, New York, became the first legislative body in the country to officially support a new investigation into the events of 9/11, according to Architects and Engineers for 9/11 Truth.

The resolution calling for a new investigation was drafted by Commissioner Christopher Gioia and it was immediately and unanimously approved by the five commissioners.

“We’re a tight-knit community and we never forget our fallen brothers and sisters. You better believe that when the entire fire service of New York State is on board, we will be an unstoppable force,” said Commissioner Christopher Gioia, adding, “We were the first fire district to pass this resolution. We won’t be the last.”

According to the report:

The impact of 9/11 on the community extends well beyond the victims and their grieving families. On September 12, 2001, the Franklin Square Fire Department was called in to assist with the massive rescue and recovery effort that was just getting underway. Countless members of the department, including Gioia and Commissioner Philip Malloy (then rank-and-file firefighters), spent weeks on the pile searching in vain for civilians and fellow responders who might still be alive. Today, Malloy is one of thousands suffering chronic health effects.

The department also lost one of its own in Thomas J. Hetzel, affectionately referred to as “Tommy” by the commissioners. Hetzel was a full-time member of the New York Fire Department in addition to serving as a volunteer firefighter in Franklin Square. A touching memorial to Hetzel was on display during the meeting, and Hetzel’s widow, parents, and sister were all in attendance.

“The Hetzel and Evans families were very appreciative of the proceedings,” Gioia commented the day after the meeting. “They know it’s an uphill struggle. But at least they have hope, which is something they haven’t had in a long time.”

The importance of this resolution — especially coming from a legislative body of fire fighters — cannot be understated. The impact of first responders calling for a new investigation over the use of explosives is massive. The naysayers who call those who question the official narrative “kooks” will have a hard time going after fire commissioners.

This move is yet another blow to the highly questionable and h***-filled official narrative. As TFTP reported earlier this year, in another major move from the great folks over at the Lawyers’ Committee for 9/11 Inquiry, Architects & Engineers for 9/11 Truth, and 9/11 victim family members Robert McIlvaine and Barbara Krukowski-Rastelli, a joint federal lawsuit has been filed to assess any evidence the FBI may have known about that contributed to the destruction of the towers on 9/11 which they may have kept from Congress. 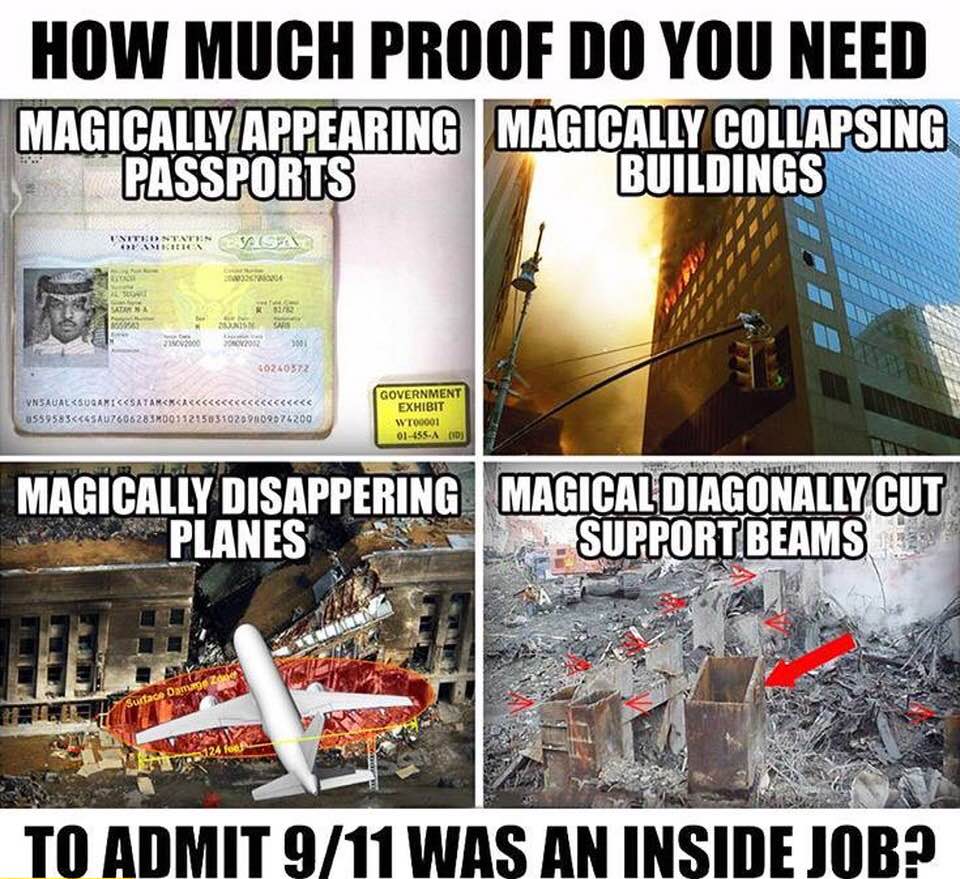 The complaint cites the failure of the FBI and its 9/11 Review Commission to assess key 9/11-related evidence that the FBI can be shown to have had, or been aware of, regarding:

According to the press release on Architects & Engineers for 9/11 Truth, this is evidence relevant to the 9/11 Review Commission’s and the FBI’s compliance with the mandate from Congress, which should have been assessed by the FBI and the 9/11 Review Commission and reported to Congress. The complaint also cites the destruction by the FBI of evidence related to the “High Fivers.” Architects & Engineers for 9/11 Truth has joined in bringing the counts that involve the evidence of the World Trade Center’s explosive demolition and evidence related to the “High Fivers,” while the other plaintiffs are party to all counts.

Also, as TFTP previously reported, a monumental step forward in the relentless pursuit of 9/11 truth took place last December when a United States Attorney agreed to comply with federal law requiring submission to a Special Grand Jury of evidence that explosives were used to bring down the World Trade Centers. Then, in March, the group behind the submission, the Lawyers’ Committee for 9/11 Inquiry, announced the filing of a “petition supplement” naming persons who may have information related to the use of said explosives.

According to Architects and Engineers for 9/11 Truth, the 33-page document contains 15 different categories of persons who may have information material to the investigation, including contractors and security companies that had access to the WTC Towers before 9/11, persons and entities who benefited financially from the WTC demolitions, and persons arrested after being observed celebrating the WTC attacks.

A names-redacted version of the petition supplement, which was filed with the U.S. Attorney for the Southern District of New York on February 14, 2019, has been made available to the public. The un-redacted version filed with the U.S. Attorney today will remain undisclosed in the interest of maintaining the secrecy, security, and integrity of the grand jury proceeding.

As TFTP reported in December, for the first time since 9/11 the federal government is taking steps to hear evidence that explosives may have been used to destroy the world trade centers.

The Lawyers’ Committee for 9/11 Inquiry successfully submitted a petition to the federal government demanding that the U.S. Attorney present to a Special Grand Jury extensive evidence of yet-to-be-prosecuted federal crimes relating to the destruction of three World Trade Center Towers on 9/11 (WTC1, WTC2 and WTC7).

After waiting months for the reply, the U.S. Attorney responded in a letter, noting that they will comply with the law.

“We have received and reviewed The Lawyers’ Committee for 9/11 Inquiry, Inc.’s submissions of April 10 and July 30, 2018. We will comply with the provisions of 18 U.S.C. § 3332 as they relate to your submissions,” U.S. Attorney Geoffrey Berman stated.

According to the petition, dozens of exhibits were presented as evidence that explosives were used to destroy all three world trade centers.

The Lawyers’ Committee’s April 10th 52-page original Petition was accompanied by 57 exhibits and presented extensive evidence that explosives were used to destroy three WTC Towers on 9/11.That evidence included independent scientific laboratory analysis of WTC dust samples showing the presence of high-tech explosives and/or incendiaries; numerous first-hand reports by First Responders of seeing and hearing explosions at the World Trade Center on 9/11; expert analysis of seismic evidence that explosions occurred at the WTC towers on 9/11 both prior to the airplane impacts and prior to the building collapses; and expert analysis and testimony by architects, engineers, and scientists concluding that the rapid onset symmetrical near-free-fall acceleration collapse of these three WTC high rise buildings on 9/11 exhibited the key characteristics of controlled demolition. The July 30th Amended Petition included the same evidence but also addressed several additional federal crimes beyond the federal bombing crime addressed in the original Petition.

The Lawyers’ Committee concluded in the petitions that explosive and incendiary devices that had been preplaced at the WTC were detonated causing the complete collapse of the World Trade Center Twin Towers and Building 7 on 9/11, and the resulting tragic loss of life, and that “the evidence permits no other conclusion — as a matter of science, as a matter of logic, and as a matter of law.”

“This Petition Supplement is intended to assist the Special Grand Jury by providing a roadmap for a meaningful investigation into the yet-to-be-prosecuted 9/11 WTC crimesthat the Lawyers’ Committee has reported and documented in our Petitions,” Attorney David Meiswinkle, President of the Lawyers’ Committee’s Board of Directors, said.

Finally, after nearly two decades of ridicule, dismissal, and outright intolerance of information contrary to the “official story” of what happened on 9/11, the public may finally learn the truth of what happened and who was behind it.

Carolin Radcliff commented on the blog post 'OUTPOURING OF LIGHT, SEVEN SACRED WEEKS, ARCHANGEL METATRON'
"So be it and so it is!"
11 hours ago