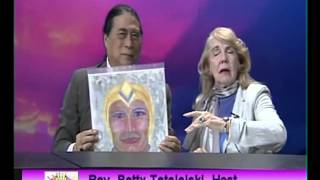 In Tucson Arizona USA, there is a bi-monthly cable television show called "Steps Beyond Time."

The shows hosts are Rev. Betty Tatalajski and Rev. Darryl Schoon.  Both the hosts are Psychic

Mediums.  Featured in this show called "The Ashtar Command"

In this show Rev. Betty shows and introduces us to a Space commander named
Gold Star. She explains how in 1980, she witnesses a gold flying sphere about
20 ft over her head. It starts to telepathically talk to her. She is given a telepathic visual
tour of the inside of Commander Goldstar's Ship..  Goldstar  revealed to Rev. Betty later
on in her life, that he is actually Lord Sananda,  He approached Rev. Betty in a way that she
could handle and process the information at the time.
Rev. Betty explains that Lord Sananda is one of the 6 Kumuras who came with Sanat Kumura.
Lord Sananda's dept is in charge of all world religions. 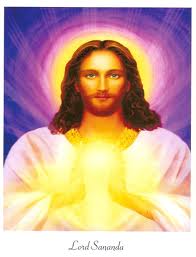 Immediately after seeing the flying sphere, Rev. Betty calls another psychic medium in the Tucson area. (Rev. Rita Selman)
Rita Selman, who happens to be the spokesperson for the Ashtar Command for the Southwest sector of the United States..
In this episode, Rev. Betty tells the story of how Rev. Rita Selman received
her the details of her commission.  (Commission is the act of granting certain
powers or authority to carry out a particular task or duty.)  There was an
appearance of a little girl sitting on a rock in the middle of desert.  When
Rev. Rita and her husband went out to investigate, they both recognized the
little girl.  This little girl revealed that, this is the chosen form she came
to speak, to both of them in.  She revealed, that she is really a space commander
for the Ashtar Command. She then proceeded to tell Rev. Rita about
her commission.
Listen to Rev. Betty Tatalajski tell it!
In this link is Rev. Rita Selman and her husband Loyd. p3
http://www.thetempleofuniversality.org/NL-MARCH-APRIL-2007.pdf
Rev Rita Selman nows works from the Spirit world assisting the original
Ashtar groups that she helped set up, in whatever manner that is needed.
Rev. Betty also tells of how the Temple of Universality received it's commission
and from whom.. She tells that the commission was given to her by a being                        Sanat Kumura
called Sanat Kumura (Ancient of Days)
http://en.wikipedia.org/wiki/Sanat_Kumara 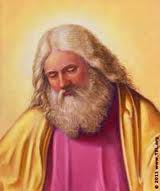 http://en.wikipedia.org/wiki/Ancient_of_Days
In the Temple of Universality, we work with the Holy Spirit who encompasses
all of our creators universe.. Those that are human and many who are of a different nature.
All the beings who come through the Temple are of God's Light and Radiance.
This is a very informative show, especially if you are interested in
some of the early movements of the Ashtar Command.
After hearing these stories, I really start to question who everyone really is?
Why they are here? And so forth!
Read my blog, Casting Call, Stage Actors Planet Earth:
http://dreaming2013salscorner.blogspot.com/2013/08/casting-call-stage-actors-planet-earth.html
Let me know what you think?
Sal Salvadini
Views: 297
Tags: ashtar, command, kumura, lord, sananda, sanat, temple, universality, of
E-mail me when people leave their comments –
Follow

"The hardest part of astral experiences or past life memories are our assumptions when we lack mental clarity or get too attached to our assumptions.

One of the things we can do is to observe (or meditate upon) our own memories, beliefs, astral or…"

"I love to read these data and personal experiences.

I have been wondering if the current interests and (light)work of starseeds is directly related to the life in which they got karmically tied to this planet.

So if a starseed was a genetic…"