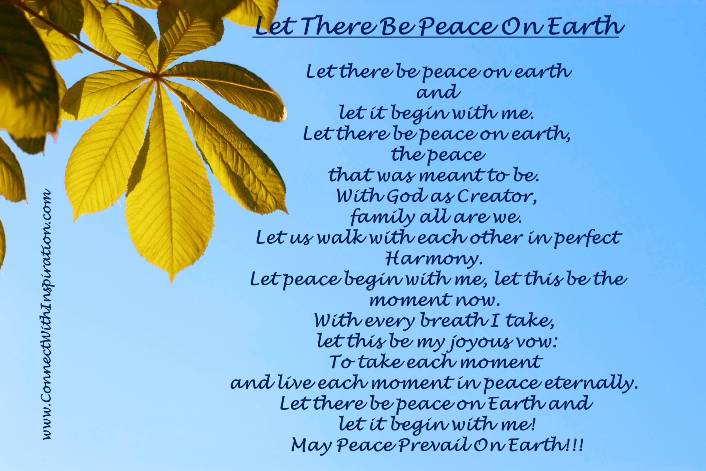 Thinking about the war first

Look at the silent blue sky

Thinking about the war

Look towards the clouds

Feel the fragrance of flowers

Feel the humanity within yourself

Teenagers from all races and religions around the world wrote the lyrics to the song “Let There Be Peace On Earth.”  The group of 180 students wanted to share their gift of love for humanity through this phenomenal song.  This song has travelled across the globe and is sung in schools, places of worship and at the United Nations.  Johnny Mathis, Bob Hope, Nat King Cole and many other professional artists added this song to their repertoire.  The song was given many awards.  Our youth are amazing!

Historical figures whose sole purpose was to bring peace to humanity were betrayed, excommunicated, assassinated and imprisoned for these teachings.  How is it possible for a group of youngsters to gain fame and accolades while charismatic leaders are judged and condemned by society?  The answer is the collective consciousness is much more powerful than the power of a single individual.  Huge feats occurred in history when massive groups of devoted followers joined their leaders in pursuit of peace and freedom.

Martin Luther King Jr. promoted non-violence.  During a boycott, King was imprisoned along with many others and found guilty.  He appealed his case and the Montgomery Bus Boycott made King a legend.  Dr. King wrote a letter from his jail cell that gave people the courage to have a national Civil Rights Movement.  This mass movement ended segregation.  Dr. King’s famous “I Have A Dream” speech demonstrated the power of peace over war.

Socrates was a master philosopher whose brilliance outshone many of the finest minds in Greece.  Socrates listened to voices inside his head that taught him the meaning of truth and justice.   He acknowledged his short comings and rose above them.  He willingly shared this message with all.  Socrates stated “one who realizes he is ignorant will become the wisest of all.”  Many people in Greece felt Socrates was brainwashing their youth and his sentiments were against the Greek government.  Socrates was sentenced to death and forced to drink poison.

The Dalai Lama is the head spiritual leader of Tibet and he practices compassion, love, peace, unity, tranquility and harmony.  This holy man was exiled from his own country.  Furthermore, as the Dalai Lama spoke in Washington DC in March 2014, “hundreds protested outside on behalf of the International Shugden Community of Buddhists.”  The article from USA Today further stated the Dalai Lama’s speech ended that day with the following words “May the world see prosperity and prepare the coming of graceful teacher and we can live in harmony and mutual respect.  May the grace remain alive for all.”

Nelson Mandela was an excellent lawyer who protested against the African government’s unfair treatment of its citizens.  He organized boycotts and was convicted of treason.  His sentence was life imprisonment.  News spread worldwide about racial injustices with the intent to free Mandela.  He was released from prison after serving almost 30 years of his sentence.  He became President of South Africa and was respected globally for his tenacity and perseverance for peace.

Gandhi’s mission was to free the impoverished and the abused in India.  He encouraged people to protest against unjustifiable taxation and discrimination.  Gandhi was imprisoned for conspiracy.  After Gandhi’s release from prison, he was assassinated for trying to teach the Muslims and Hindus peaceful methods to end their controversies.

Joan of Arc was the Saint who led the French people to victory.  Joan spoke to Archangel Michael through her visions.  One minute Joan of Arc was a heroin and the next moment she was on trial for heresy.  She was burned at the stake.  Twenty-five years after her execution, she was pronounced innocent and declared a Saint once again.

When Moses was a shepherd, he saw an Egyptian beating a Jew.  Moses killed the Egyptian and buried him.  People gossiped so Moses fled from Egypt so he wasn’t executed by the Pharaoh.  Moses encountered God as a burning bush.  After this encounter, Moses went to the Pharaoh and said “The God of my forefathers told me to tell you Let My People Go.”  Moses was referring to the genocidal decree issued by the Pharaoh against the Jews.  Ironically, Moses grew up as the grandson of the Pharaoh.  Moses put his staff down and it became a snake, but the Pharaoh was unimpressed.  God sent 10 plagues to demand the release of the Israelites from slavery to no avail.  The Pharaoh was unrelenting.  Finally, Moses led the people to freedom by parting the Red Sea.

Muhammad met Archangel Gabrielle in a secluded cave.  He began proclaiming that “God is one,” and he, Muhammad, was a messenger of God.  Muhammad and his few followers fought with Meccan tribes and due to a plot to assassinate him, he moved to Medina.  At the end of eight years, Muhammad and his army of 10,000 peacefully regained Mecca.  When the Muslims speak about Muhammad and other prophets, they say “peace be upon him.”

Jesus was a brilliant teacher who performed miracles of healing.  Jesus had 12 disciples and he knew at the Last Supper one of his followers would betray him.  All the apostles sitting at the table that night swore their undying love to Jesus.  As predicted, Judas betrayed Jesus.  Jesus was crucified for being “The King of the Jews.”  His dying words were “please forgive them father for they know not what they do.”  Even when faced with a horrifying death, his thoughts were of love and forgiveness for humanity.

Buddha was born into a royal family and had all the material things he could ever want.  He also had a wife with a beautiful soul.  The day he decided to go outside the palace walls, he witnessed poverty, illnesses and abuse.  At that moment, he renounced all his worldly possessions with the intent to help humanity.  Buddha learned from great teachers along the way.  He began fasting and still he did not achieve his purpose so he began to eat again.  He felt defeated.  Buddha sat under the Bodhi tree refusing to move until he could help mankind.  He became enlightened the minute he sent that intention out to the Universe.  His teachings were profound messages about love, peace and compassion for all.

These leaders of the world listened to their higher selves.  What they saw was their pure divine soul.  Morality, integrity, peace, compassion, unity and harmony filled their thoughts.  They observed life from a new perspective.  For instance, who would believe a burning bush talks and at the same time doesn’t burn to the ground?  There was one person who believed even though it is way beyond logic.  His name was Moses and he led the people to safety.  When one surrenders to God, there is no more questioning.  It is because it is.  I am because I am.  Control is relinquished as one goes with the flow and allows the existential energy to guide him/her.

“Let There Be Peace On Earth and Let It Begin With Me.”  Each one of us must start the process of peace within ourselves and others will join.  When one has love in his/her heart, the pure light energy draws others around him/her automatically, similar to the Saints we just described.  “With God As Creator….Family All Are We…Let Us Walk With Each Other…In Perfect Harmony.”  There is only one Creator and he/she is God, Existential Energy, Source or any other identity.  He/She is Universal energy.  Any person, Saint or not, in physical form is an incarnation of existential energy.  This makes us all family and we must walk together in perfect harmony.   The brilliant teenagers who wrote “Let There Be Peace On Earth” were messengers from God.  It is time to listen to their words of wisdom.

"Dr. Richard Fleming of https://flemingmethod.com joins The Alex Jones Show in-studio to break down the case currently being examined by multiple state attorneys general to indict Fauci, Gates, and those involved in engineering a pandemic.…"

"Our erudite contact in Russia, who was living in Italy when she made this vlog, talks about the many words used in English, which originate from Russia...
Some of these words are used incorrectly, so it's always good to be of maximum…"

The word itself could…"

Dear readers, because so many have begun to question and even lose hope as they look out on today’s world, this message is intended to bring greater understanding and encouragement with regard to earth’s ascension process. Much of this has to do…
See More

THE DIVINE LIGHT IS RETURNING TO EARTH, AND WE WILL EXPERIENCE A MASSIVE VIBRATIONAL SHIFT AS WE PREPARE FOR THE NEW EARTH.  Gaia's Ascension UpdateAs I have stated before, the energies on Gaia are changing. Many things are happening as a result of…
See More

Top-level negotiations between Asian and Western elders to start a new golden age for humanity are proceeding well, according to sources involved. The basic agreement calls for the complete write-off of all debts, public and private, a one-time…
See More

"Sometimes i feel were the Water is. The Air feels from that direction always a little bit cold."

Listen to this X22 report by Dave and as usual I recommend…"
More…
Loading ...