Weather across the Southwest is detailed in the above AccuWeather.com video.

An atmospheric blast furnace will be at full throttle this weekend over the interior West with heat reaching dangerous levels, challenging records and elevating the wildfire threat.

While many folks over the interior West are accustomed to and expect hot weather during the summer, this pattern is taking the heat to the extreme. In some cities, record highs for any date throughout the year could be equaled or breached.

Cities that could set new annual extreme temperature marks include Flagstaff and Phoenix, Ariz., and Las Vegas and Reno, Nev.

The heat is so intense that Death Valley will approach the world's hottest temperature record Sunday and Monday. 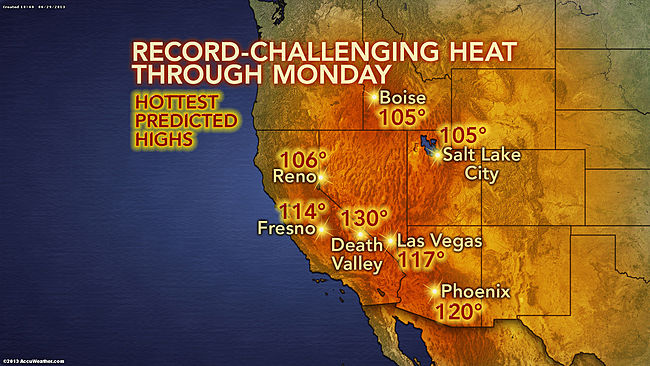 Cities that will continue to experience record-challenging heat on a daily basis during the pattern into next week include Las Vegas, Nev., Phoenix, Ariz., Salt Lake City, Utah, Boise, Idaho, Medford, Ore., and Fresno, Calif.

According to Western Weather Expert Ken Clark, "People driving through desert areas during the pattern should make sure their vehicle can make the journey and that they carry extra water in case their vehicle breaks down."

More numerous communities across the Northwest, such as Seattle and Spokane, Wash., and Pendleton, Ore., will join this list early next week as the heat expands northward. 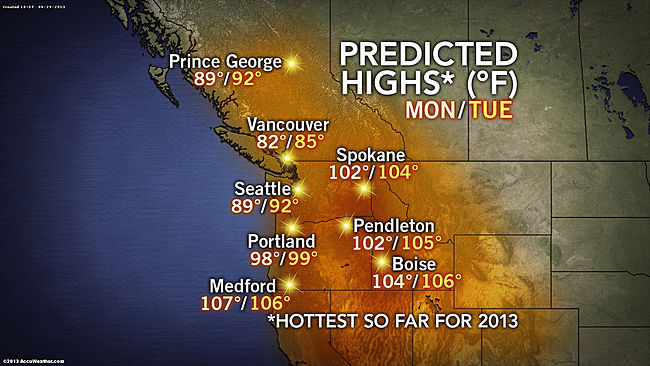 The absence of an offshore flow will allow the beaches to stay comfortable during this extremely hot spell.

As temperatures soar to record-challenging levels, drying brush and the potential for spotty thunderstorms will push the wildfire threat to new areas and raise the risk in other locations. 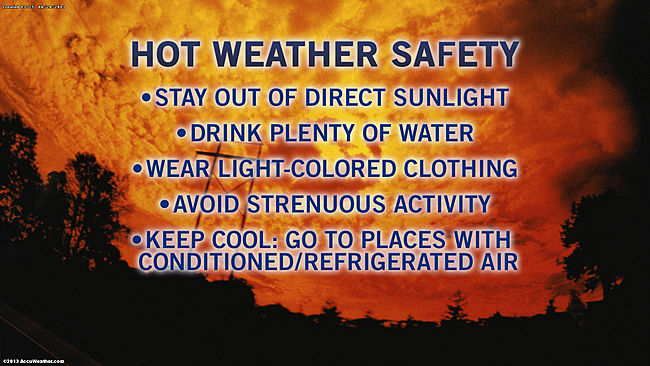 The system producing the heat and sunshine will allow widely separated, pop-up thunderstorms with time. Most of the storms will form and die over the mountains, but there will be a few exceptions.

A few locations can receive a downpour. However, many of the storms will bring little or no rainfall. This phenomena, commonly called "dry lightning," can spark new wildfires. 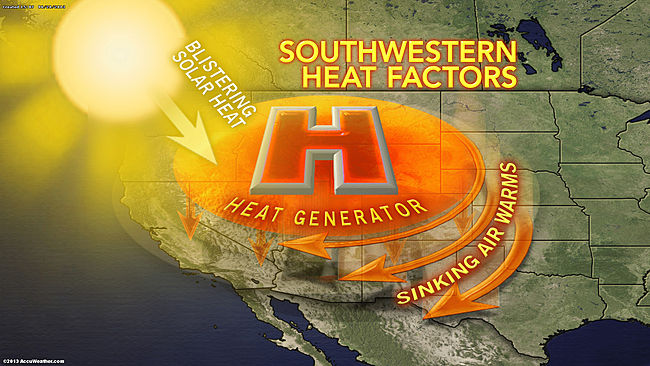 While the natural spark for wildfires cannot be avoided, people are urged to be very careful when using outdoor power equipment and open flames. Never park a vehicle that has been running for any length of time over dry grass and brush as the hot exhaust can start a fire. Don't throw burning cigarettes out of your vehicle.

Building heat, drought and the risk of wildfires could result in a fireworks ban in some communities as Independence Day activities increase.

This story was originally published on Monday, June 24, 2013, and has been updated by AccuWeather.com Senior Meteorologist Kristina Pydynowski.

DEATH VALLEY, Calif. — Scorching heat blistered the Southwest on Saturday, where highs between 115 and 120 degrees were recorded for parts of Arizona, Nevada and California.

Phoenix hit 119 degrees by mid-afternoon, breaking the record for June 29 that was set in 1994. And large swaths of California sweltered under extreme heat warnings, which are expected to last into Tuesday night – and maybe even longer.

The forecast for Death Valley called for 128 degrees Saturday, but it was 3 degrees shy of that, according to unofficial reports from the National Weather Service. Death Valley's record high of 134 degrees, set a century ago, stands as the highest temperature ever recorded on Earth.

A couple hours south in Baker, the temperature peaked at an unofficial 117 degrees in the road tripper's oasis in the Mojave Desert on Interstate 15. The strip of gas stations and restaurants between Los Angeles and Las Vegas is known by travelers for the giant thermometer that often notes temperatures in the triple digits.

At the Mad Greek restaurant there, a waitress called out orders for "Chocolate shake! Strawberry shake!" while the temperature hovered at 112 degrees during the lunch rush.

Burbank set a record overnight low with temperatures dipping to 74 degrees overnight, much warmer than the previous record of 68 degrees for Saturday's early hours.

In Northern California, temperatures Saturday reached the upper 90s in San Jose. Farther north, triple-digit temps were reached in downtown Sacramento on Saturday, according to the weather service.

Authorities say a man died and another was hospitalized in serious condition Saturday afternoon in Las Vegas.

Las Vegas fire and rescue spokesman Tim Szymanski says paramedics responded to a home with no air conditioning and found an elderly man dead. He says while the man had medical issues, paramedics thought his condition was aggravated by the heat.

Paramedics say another elderly man was on a long trip in his car when the air conditioning went out. Paramedics say he taken to the hospital in serious condition with heat stroke after he stopped in Las Vegas.

Cooling stations were set up to shelter the homeless and elderly people who can't afford to run their air conditioners. In Phoenix, Joe Arpaio, the famously hard-nosed sheriff who runs a tent jail, planned to distribute ice cream and cold towels to inmates this weekend.

Officials said personnel were added to the Border Patrol's search-and-rescue unit because of the danger to people trying to slip across the Mexican border. At least seven people have been found dead in the last week in Arizona after falling victim to the brutal desert heat.

Temperatures are also expected to soar across Utah and into Wyoming and Idaho, with triple-digit heat forecast for the Boise area. Cities in Washington state that are better known for cool, rainy weather should break the 90s next week.

The heat was so punishing that rangers took up positions at trailheads at Lake Mead in Nevada to persuade people not to hike. Zookeepers in Phoenix hosed down the elephants and fed tigers frozen fish snacks. Dogs were at risk of burning their paws on scorched pavement, and airlines kept close watch on the heat for fear that it could cause flights to be delayed.