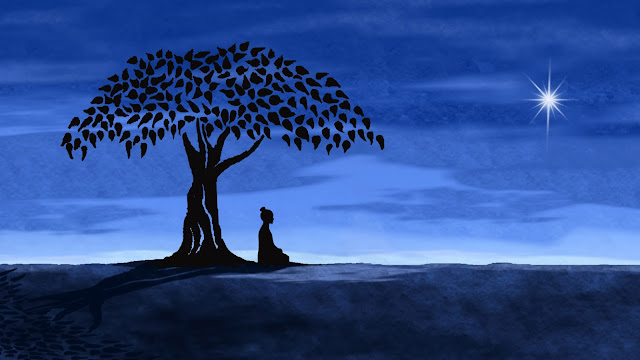 I am amongst you. Arrived with a huge team. Masters surround me and Masters, who have already ascended, work on your energy fields, so that you can awaken. Finally there is only one obstacle, which makes it impossible for you to reach Buddha-hood: It is the hanging on to your known life and it is your refusal, to let in to God, whereby the really huge development steps are not forthcoming.

I am Buddha, who has arrived. The One who has arrived amongst you and the One completed in God. Follow me and remain true to self, then you understood. We continue with the message from yesterday and I take on the same track of the Ascended Masters as yesterday. For that the following Knowledge is necessary. As you know, there are already many ascended Masters here on earth, as never before in the history of Mankind. These are mainly incarnated in human bodies, which means, they have decided, to walk again the very demanding path of human evolution.

Each of you know, what it means to “be human”, to be exposed to these givens and so is this fact, that already completed Masters have arrived as humans among humans, a very significant one. This decision was made by all Masters, because the earth got into severe turbulences during the ascension process. Many of these “turbulences” are known to you. In order to stabilize the ascension process and guarantee it, it required such high energies and it still requires them today (This is the actual mission of the PAT, note George).

It is also worth knowing, that every already completed Master had to acquire a “human deficiency”, so that he can enter into bodily form. Because an illumined Being has only one thing on his mind: to immediately leave this world and return to the Source. These are mostly “small characteristics”, which keep these Beings on the ground of the earth (this is extremely important information for all of you as not to bother about your alleged personal deficiencies as they are artificial and necessary prerequisites for you to stay on the ground and complete this mission, note George.).

Of RAMA KRISHNA you know, that he paid a lot of attention to eating and asked his wife several times during the day, what kind of food is being served for eating. This may sound rather odd for his students and not understood, until RAMA KRISHNA declared: “From the day, when I stop asking my wife about food, I will remain on earth for another three days.”

And so it happened. One day the Master lost interest in eating, his questions went silent and three days later his essence changed – and he ascended to God. RAMA KRISHNA is also at my side at this moment, when it is said: The corridor of the Masters guarantees your ascension, if you actually claim it for yourself. This “minor deficiency”, which a completed Master has to decide on, so that he can walk on earth in a human body, has also been necessary, so that this Being can go into a deep relationship with this earth. With this earth, as it has been so far: incomplete, imperfect, unrefined.

This is described here, so that you can have an idea, how important this time is and that the description “The time of all times” is absolutely on the spot. In summary it is evident today, that all paths lead to ascension, even detours. What is it now, what do need to take into consideration now? What do you need to work on and what do you need to let go?

a) As was mentioned before, grapple with your actual assignments.

b) Grapple with the fact, to let go of linear thinking, because it makes you impatient and helpless, especially now, because patience and equanimity are indispensible. Life and every process in God’s Creation happen in circles – in elliptic rings and cycles – and never are a linear matter.

You are used to think about, how to get from A to B. And you muse about the fastest way. As an arrow can only fly in a linear direction, so you plan your life: A-B. That doesn’t take you very far, except to your next target and when you arrive, you select a new target from B to C. And so it goes on forever. This is completely wrong on a spiritual path, with this method you will go nowhere. Observe, what happens, after you throw a rock into the water. The rings and circles, which show themselves on the surface of the water, are symbolic of life and the great cosmic river of life. That is life, everything moves in rings and is never linear.

For you it means quite practically: Get involved in Life, as you let go of all concepts, which can be measured. Simply be totally within self. The more you pursue a goal, the stronger it withdraws from you very often. This is also a law and one likes to forget it. This means, be totally with a thing and relax. Enlightenment is always a gift from the Creator and will never be given, after one has cited the thousand’s mantra, has visited the hundred’s temple or has directed one’s daily meditation totally towards enlightenment.

The greatest adventure, which a human Being has to enter into, before he achieves enlightenment, is the adventure of letting go. In these days what one needs to omit, is to prepare the ascension in such a manner, that it is connected with “success expectations”, which are founded in your concept of linear time. Everything is on its way, individual ascensions are taking place and you will also be called. This will happen on the day, when you are totally relaxed sitting under a tree and sitting on the ground and looking up to the sky in heaven – without expectation, without tensions, without wishes, without intentions – as you are totally in self and you cannot react to any distraction from your mind, because you have arrived.

The human will of holding on to old programs and the human unwillingness to actually let go, defeat some great leaps in consciousness. Letting go is not a concept. Letting go is the alpha and omega, as one considers the heaven, and essential for the successful return to God.

At the end of this message I list the following:

1) The transformation and the ascension continue undiminished.

2) It has been successful, to have some leaders of nations agree to a soul transfer.

3) The fronts of the armed forces without light crumble.

4) The light warriors begin to realize their victory. In these days remain like a rock within self.

Immediately address each insecurity and each doubt by researching their traces, the cause of them; and eliminate these consistently and thoroughly. Anchor yourself in the vibration of love, which can immediately define your life, so you consciously take care of it. Overcome the thinking and feeling in linear structures. Become the bow, whose string relaxes after each tension, yes, has to relax, so that the next arrow can be sent on it’s way. Which means: Relax, be the bow and not the arrow.

God’s empire comes to you, after you have realized, how you attract it and tempt it into your presence. After you have accomplished the greatest of all deeds: LETTING GO! Life comes, after all false concepts have been eliminated; Love is all-present, after you can expect more of yourself than before. Letting go, which is even very modern today, is understood by only a few.

Also the “trust in God” is rarely understood, because mainly those should rely on it, who seem unsuitable for the demands of this world.

Many assume and many err. Because actually are Letting go and trust in God the all-healing servants of every human consciousness, which wants to complete itself. Dear Creators of many worlds, who you are! Create the kind of world from now on, on which you would like to live. Be and live, what you expect from the world. Be the change, be the way and everything will adjust immediately to your decision. So it is up to you and because, what is not yours, we, the Ascended Masters, who create the corridor of light for this Mankind, so that all will arrive in the Light, will take care of it.

The days lose the power over you, so you learn to see the great arc and recognize yourselves as eternal consciousness. To live, as it complies with you, or live, as many conditionings prescribe it to you and offer it to you? You have the choice!