Contrary to some of the common beliefs out there, the claims behind the end of the world quickly unravel when pinned down to the 2012 timeline.

Below, NASA Scientists answer questions on the following 2012 topics: 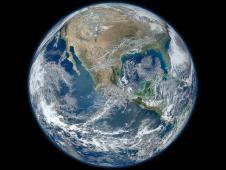 › View larger
A 'Blue Marble' image of the Earth taken from the Visible/Infrared Imager Radiometer Suite (VIIRS) instrument aboard NASA's Suomi NPP satellite. This composite image uses a number of swaths of the Earth's surface taken on January 4, 2012. Credit: NASA/NOAA/GSFC/Suomi NPP/VIIRS/Norman Kuring
Question (Q): Are there any threats to the Earth in 2012? Many Internet websites say the world will end in December 2012.

Answer (A):The world will not end in 2012. Our planet has been getting along just fine for more than 4 billion years, and credible scientists worldwide know of no threat associated with 2012.

Question (Q): Are there any threats to the Earth in 2012? Many Internet websites say the world will end in December 2012.

Answer (A):The world will not end in 2012. Our planet has been getting along just fine for more than 4 billion years, and credible scientists worldwide know of no threat associated with 2012.

Q: What is the origin of the prediction that the world will end in 2012?

A: The story started with claims that Nibiru, a supposed planet discovered by the Sumerians, is headed toward Earth. This catastrophe was initially predicted for May 2003, but when nothing happened the doomsday date was moved forward to December 2012 and linked to the end of one of the cycles in the ancient Mayan calendar at the winter solstice in 2012 -- hence the predicted doomsday date of December 21, 2012.

A: Absolutely not. Neither NASA nor any other scientific organization is predicting such a blackout. The false reports on this issue claim that some sort of "alignment of the Universe" will cause a blackout. There is no such alignment (see next question). Some versions of this rumor cite an emergency preparedness message from NASA Administrator Charles Bolden. This is simply a message encouraging people to be prepared for emergencies, recorded as part of a wider government preparedness campaign. It never mentions a blackout.
›Watch the Video

Q: Could planets align in a way that impacts Earth?

A: There are no planetary alignments in the next few decades and even if these alignments were to occur, their effects on the Earth would be negligible. One major alignment occurred in 1962, for example, and two others happened during 1982 and 2000. Each December the Earth and sun align with the approximate center of the Milky Way Galaxy but that is an annual event of no consequence.
› More about alignment

Q: Is there a planet or brown dwarf called Nibiru or Planet X or Eris that is approaching the Earth and threatening our planet with widespread destruction?

A: Nibiru and other stories about wayward planets are an Internet hoax. There is no factual basis for these claims. If Nibiru or Planet X were real and headed for an encounter with the Earth in 2012, astronomers would have been tracking it for at least the past decade, and it would be visible by now to the naked eye. Obviously, it does not exist. Eris is real, but it is a dwarf planet similar to Pluto that will remain in the outer solar system; the closest it can come to Earth is about 4 billion miles.

Q: What is the polar shift theory? Is it true that the Earth's crust does a 180-degree rotation around the core in a matter of days if not hours?

A: A reversal in the rotation of Earth is impossible. There are slow movements of the continents (for example Antarctica was near the equator hundreds of millions of years ago), but that is irrelevant to claims of reversal of the rotational poles. However, many of the disaster websites pull a bait-and-switch to fool people. They claim a relationship between the rotation and the magnetic polarity of Earth, which does change irregularly, with a magnetic reversal taking place every 400,000 years on average. As far as we know, such a magnetic reversal doesn’t cause any harm to life on Earth. Scientists believe a magnetic reversal is very unlikely to happen in the next few millennia.
› More about polar shift

Alan commented on the blog post 'THE 9 D ARCTURIAN COUNCIL - " HUMAN/EXTRA-TERRESTRIAL HISTORY " through DANIEL SCRANTON'
"It is great news that we have already known that we are not alone and never have been. It is also…"
10 minutes ago

Alan commented on the blog post 'WEEKLY GALACTIC UPDATE from the PLEIADIAN-SIRIAN-ARCTURIAN COUNCIL OF LIGHT through ASARA ADAMS'
"We are appreciative beyond measure, thank you all & bless all the ones helping for our…"
25 minutes ago