The events of the past week, and the coming weeks, will go down in history as one of the biggest, if not THE biggest, revolutions in history.  We are not talking just about the fall of the United States of America Corporation.  We are talking about the end to a system of slavery that has continued for thousands of years.

The U.S. military is now officially on the warpath.  Multiple U.S. warriors like Generals Michael Flynn and Thomas McInterney are among the many who have gone on the record to say a Second American Revolution is underway.

We can also report from both the P3 Freemasons and Russian FSB sources that the Khazarian Mafia (specifically the Davos people and the European dark nobility) has reached out to the White Dragon Society and its allies to negotiate a surrender.

“The Deep State is in panic, they want to negotiate…they understand at the highest level what really happened and are afraid.”

This is going to take time because it will involve complex exchanges of documents and actual face-to-face meetings (not via computer networks).  Remember these are the hidden families who privately own such institutions as the UN, the IMF, the BIS, and the World Bank.  That is why arranging an orderly transition cannot be expected to take place overnight.  Anything that replaces it must be democratic, meritocratic, and visible to all.

However, the longer the Khazarians delay their surrender, the more likely it is they will be hung from lamp-posts instead of just being forced to speak to a truth and reconciliation committee.

Also, keep in mind U.S. President Donald Trump, whether you love him or hate him, is a genuine human being elected by the human beings of the United States.  His political opponent Joe Biden is (more often now visible as a CG composite) representing an unelected group (the Cabal) that hides from public view.

In the latest indication, Pope Francis is dead, his personal doctor died last week of “Covid 19.”  Presumably, he was killed to prevent him from telling the world that the Pope is dead.  https://edition.cnn.com/world/live-news/coronavirus-pandemic-vaccine-updates-01-10-21/h_e979352feb2e66eaffd7275117d350e4

We mention Queen Elizabeth as having been replaced for the first time because…she is a lizard?

unlike in previous years, we have not received any analog documents bearing her signature as proof that she is alive.  Furthermore, new reports are now saying she and her husband have been given vaccines for the non-existent Covid-19 “virus.”

MI6 sources say this announcement was “a highly out of the ordinary protocol, it is unheard of for any details of health to ever be made mention of in public.” https://news.sky.com/story/amp/covid-19-queen-and-duke-of-edinburgh-receive-first-doses-of-their-coronavirus-vaccinations-12183316

If the Queen is gone, this means now Trump and the U.S. military are now all that stands to protect humanity from enslavement by hidden, malevolent forces.  We have received numerous, contradictory reports about where Trump is but, they all agree he and his family are at a military base somewhere in the Southern United States.

Lin Wood relayed a message of what is to come and over the years of fighting the Khazarian Mafia I can independently confirm and prove that what he says is true. 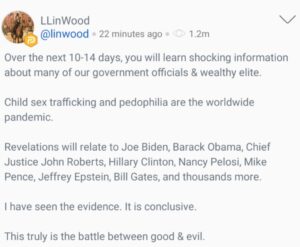 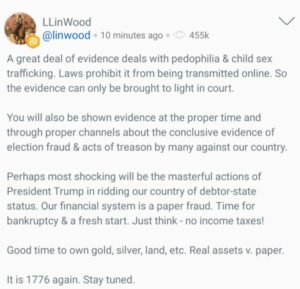 Rest assured though, that these hidden forces have to say hidden because they are few and weak and rely on bribes, lies, and murder to stay in power because they would be killed instantly in an open, fair fight.

What the U.S. military forces now fighting to save their country need to do now is correctly identify their targets for retaliation.  We will get back to that subject later.

But first, let us take a closer look at what has happened.  The trigger for the sudden escalation of this ongoing war was the events in Washington DC on January 6th, 2021.  This was a very real attempt to remove from office the last real human leader of a major power.

Here is what White Dragon Society members who were on the scene in Washington DC have to report about what really happened on that day.  As one source notes:

“In a normal joint session for the counting of electoral votes, members of the public are allowed to observe from the gallery.  On Jan 6, 2017, there were protesters in the gallery who disrupted the proceedings and were ordered to be removed.  It is highly irregular to restrict the public from observing proceedings.  But this was not the case on Wednesday (January 6th).  The public was barred from entering, due to the fake virus crisis.”

Moreover, you can see from the video that  https://www.youtube.com/watch?app=desktop&v=aDULJM-Lbd4

Our sources also say the U.S. Special Forces sent a team that was specifically trying to find Congressmen but failed.  Perhaps this group was set up.

However, General Thomas McInerney is on the record to say the Special Forces did capture computers belonging to members of Congress including that of House Speaker Nancy Pelosi.  These are filled with incriminating proof about election theft etc. https://www.bitchute.com/video/YY97haR18zKt/

We have unconfirmed reports, from CIA sources that Nancy Pelosi was subsequently arrested at the Canadian border.

What patriots need to do now is identify the correct targets.  Since Facebook, Twitter, etc. have de-platformed a sitting president then they have committed high treason.  In the normal course of events, this means the executives of these companies should face death by firing squad.  General McInerney and others say the same thing.

So now Special Forces need to be sent to the headquarters of Google, Amazon, Facebook, etc. to make arrests and stop the dissemination of deep fakes and other disinformation.

Ordinary people can help fight the high tech oligarchs by making the moves suggested in the diagram below. 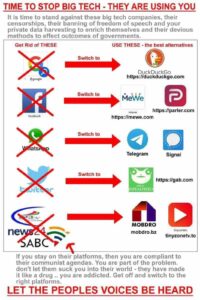 Of course, big media companies also need to be occupied by military forces.  Also, needless to say, the politicians and others pushing the election theft, lockdowns, and vaccines are obvious targets.

However, FSB sources warn that most of the obvious targets have already been moved to bunkers.  They suggest that while they hide, we should hijack the elite’s current agenda while making crucial changes to remove the malevolent bits.  For example, one FSB source and WDS member says she has personally confirmed the Russian vaccines now being promoted are “ordinary flu vaccines,” and that accepting these vaccines (even if not used) would be a way to deflect pressure to use dangerous vaccines being pushed by the cabal.

We also note that people are taking direct local action in many places.  Kentucky, San Diego, Quebec, etc. are all seeing such action. https://www.courier-journal.com/story/news/local/2021/01/09/live-updates-patriot-rally-gathered-outside-kentucky-capitol/6586529002/

We also note the U.S. military operations in Pakistan, Italy, Germany, and elsewhere related to the attempted theft of the U.S. election.  Here is the Leonardi Company President whose satellites have been implicated in the election theft. https://www.leonardocompany.com/documents/20142/5502789/CV+ING+Alessandro+Profumo.pdf?t=1603730712429

However, what U.S. patriots and the U.S. military need to understand, is that even if a new republic is declared and renounces the debts of the U.S. Corporation, it will still need to negotiate a new deal with the rest of the world.  The alternative will be a huge collapse in U.S. living standards and the closure of all overseas U.S. military bases due to a lack of funds.

Remember, it is the U.S. people and not just the U.S. government, who are bankrupt.  Now about 40% of Americans cannot pay their rent or mortgage.  Also, 110,000 restaurants have been bankrupted by the fake pandemic. http://themostimportantnews.com/the-u-s-has-lost-more-than-110000-restaurants-setting-the-stage-for-a-commercial-real-estate-collapse-of-epic-proportions/

U.S. industry has also been mostly moved to China and cannot be rebuilt overnight, It will take many years, if not decades, to do that.

The American people can take cold comfort in the fact that most of the rest of the world is bankrupt too. https://www.reuters.com/article/us-worldbank-debt/world-bank-sees-more-countries-in-deep-debt-distress-this-year-idUSKBN29A1WK?il=0&utm_source=reddit.com

From Bloomberg: “The world’s biggest economies shouldering record debt burdens are about to confront an unwelcome legacy of the financial crisis: a $13 trillion debt bill.” https://www.bloomberg.com/news/articles/2021-01-05/a-13-trillion-crisis-era-debt-bill-comes-due-for-big-economies?sref=RJ2RlMrh

Brazil’s president, for example, has admitted his country is bankrupt. https://www.ibtimes.com/brazils-president-says-country-broke-3115320

Even China is facing blackouts due to a coal shortage. https://www.cnbc.com/2021/01/05/chinese-cities-go-dark-amid-shortage-of-coal-a-key-australian-export.html

What this means is that negotiations for a jubilee and an orderly transition to a better system for running the planet are essential.  These negotiations are taking place but, to get from here to there means they need to pick up the pace.  Otherwise, we will see degeneration to chaos, warfare and mass suffering.

Post navigation
CORRUPT ITALIAN GOVERNMENT AND DEMONIZED VATICAN INVOLVED IN TREASON AGAINST THE UNITED STATES
The New mRNA COVID Vaccines Inject an Operating System into Your Body – Not a Conspiracy Theory, Moderna Admits It

Views: 73
E-mail me when people leave their comments –
Follow