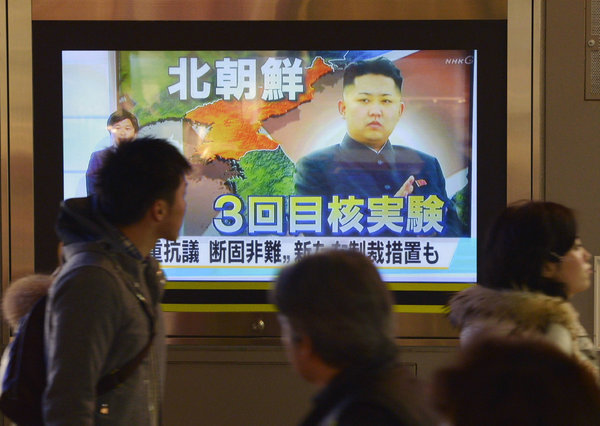 With North Korea allegedly exploding a nuclear bomb underground, readers are asking how that squares with what the galactics have said about no nuclear explosions.

We presume that the North Korean explosion was nuclear. But it might turn out to have been non-nuclear so let’s leave a little room for doubt, which a spokesman for the Company of Heaven will at some point resolve, I’m sure.

Nuclear weapons cannot be exploded in space and they cannot be used to start a war.

Suzy Ward said last year that nuclear weapons can be tested in the atmosphere just above the Earth’s surface. Presumably that isn’t space, although it is above the ground. They can also be tested below ground.

On three occasions, Suzy commented on the situation with regard to nuclear weapons testing.

1. “There’s a difference in which ‘nuclear actions’ our space family has authority to prevent. They can prevent all attempts of terrorist activities using nuclear weaponry where the intent is vast devastation/death toll, but weapons testing in the lower skies and underground is not within their prerogative to prevent.”  (1)

2. “What our universal family is authorized to do is the same as it has been since 9/11: They can prevent all Illuminati attempts to detonate nuclear weaponry in furtherance of their terrorist attacks. The free will decisions they are not permitted to interfere with also are the same: They can’t prevent weapons testing.” (2)

3. “Of course damage has been done to BODIES — peoples’ and Earth’s – by testing nuclear weaponry and most certainly by the A-bombs dropped on Japan in 1945!  That doesn’t change our space family’s much more recent authorization to prevent attempts by the Illuminati to detonate nuclear warheads in a major terrorist activity or to start a nuclear war; they aren’t authorized to interfere with weapons testing underground, ground level or shortly above Earth’s surface, what Matthew [Ward] called ‘lower skies,’ but they are permitted to ameliorate the most toxic effects.”  (3)

The galactics are empowered to stop the military use of nuclear weapons. Let’s listen to SaLuSa, Matthew Ward and the Arcturian Group on the subject:

“Often we are forced into such a position when our orders are ignored, and we only give them where we are authorized to intervene. On most occasions it is when nuclear weapons are about to be used, and all of your governments have been warned that we will not allow it to happen. Believe us, Dear Ones, some of your military commanders are still intent on using them to start another war.” (4)

“Although we have not been allowed to stop all wars, we have put a stop to nuclear devices being used to start a Third World War. We have stopped the total destruction of Earth on a number of occasions since the end of your last World War.” (5)

“We of the Galactic Federation are still surrounding your Earth, and nothing that happens escapes our notice. We are particularly aware of the attempts to place weaponry in Space, and it has been planned and attempted for quite some time. We have foiled such attempts and have warned your military and government representatives that it will not be allowed. Even so, we can neutralize any nuclear weapons wherever they are, and it is pointless in attempts being made to deceive us. You are therefore perfectly safe and guaranteed to see out the last two years of this cycle, without any major incident. It really is time that the dark Ones admitted that their plans have been foiled, and allowed you to fully focus on your Ascension.” (6)

“Our mission has recently changed from passive roles to ones that directly engage the dark forces, and we are enforcing the edict given to your military authorities that the use of nuclear weapons is not going to be allowed. We are paving the way for a declaration of world peace, from which point the use of any weaponry will be banned.” (7)

“With Creator’s exception of nuclear detonations in space, Its law of free will must be honored by God and all of His emissaries.” (8)

“People in all countries are speculating what [the U.S.] government will do relative to Iran and North Korea, so we say that you can expect more tough rhetoric, but there will be no escalation into armed conflicts.” (9)

“We hasten to assure you, the time for a full blown new war is past, today’s enemies will evolve into peaceful, co-operative relationships, and any country waging war against another will be unthinkable.” (10)

“The only exception to [the] law of honoring free will is Creator’s own—it cannot be used to start a nuclear war. In accordance with Earth’s free will decision made immediately after ’9/11,’ no other major terrorism effort can succeed. In both cases, it is God’s responsibility to prevent all such attempts. He has authorized civilizations with preventive technology to comply with those mandates, and they have done so successfully on more than a dozen occasions.” (11)

“Remember, you have been told that there is not to be a world war three or a nuclear war. It has been given from on high that this will not be allowed even though those who stand to profit from it, consistently push for it.

“These energies affect those of other planets as well as yours, dear ones. You are not isolated as you have been led to believe. Nuclear devices sent into space by your military, affect more than just earth and will not be allowed. The personal agenda of an unawakened military mentality will not be allowed to function as it has in the past.” (12)

Read more…
Started by James McConnell in Spirituality In General, Channeling and Channeled Messages, and Ascension and Awakening
0 Replies
Views: 562

"Quite:
"RL You should never say on a Webpage like this something evil like that about the Humans for who we come for. Mission Rama is about Humans not about Shan (Earth). Humans are not parasite. The true Parasits are the Reptilians and Co. who are…"

"Dealing with the dark cabal reps I have myself performed the duties associated with GFL/DC liason work..
One has to be open minded, as sometimes we can get dark agents to defect to our Lighted cause....It's a bit like the old "cold war," between the…"

"He talk about USA or Russia? Or both?
Maybe we have been warned!

"The FBI searched his house. They say about him. He took documents from the White House to his private residence.
https://www.salon.com/2022/03/30/donald-is-running-out-of-time-in-h..."

"The good guys are winning and Trump isn’t wrong 🗽"

"It's nothing new that scientist research on biological weapons although even if they are forbidden. Fact is that a virus that kills, is designed to kill only humans."
More…
Loading ...