The same handouts from Part One will be used. The BIG EXCEPTION is that houses, Midheaven, and Ascendant are not going to be used since all incorporation charts use a standard time of 12 pm or 12:01 pm (unless the comptroller of the particular U.S. state (of where the incorporation takes place) writes down the time of approval or the time of signature on the articles of incorporation). For those who didn't read Part One, here are the handouts...again, houses will not be used since all times are 12:01 pm due to unknown times of government activity related to allowing the corporation's incorporation in this analysis. 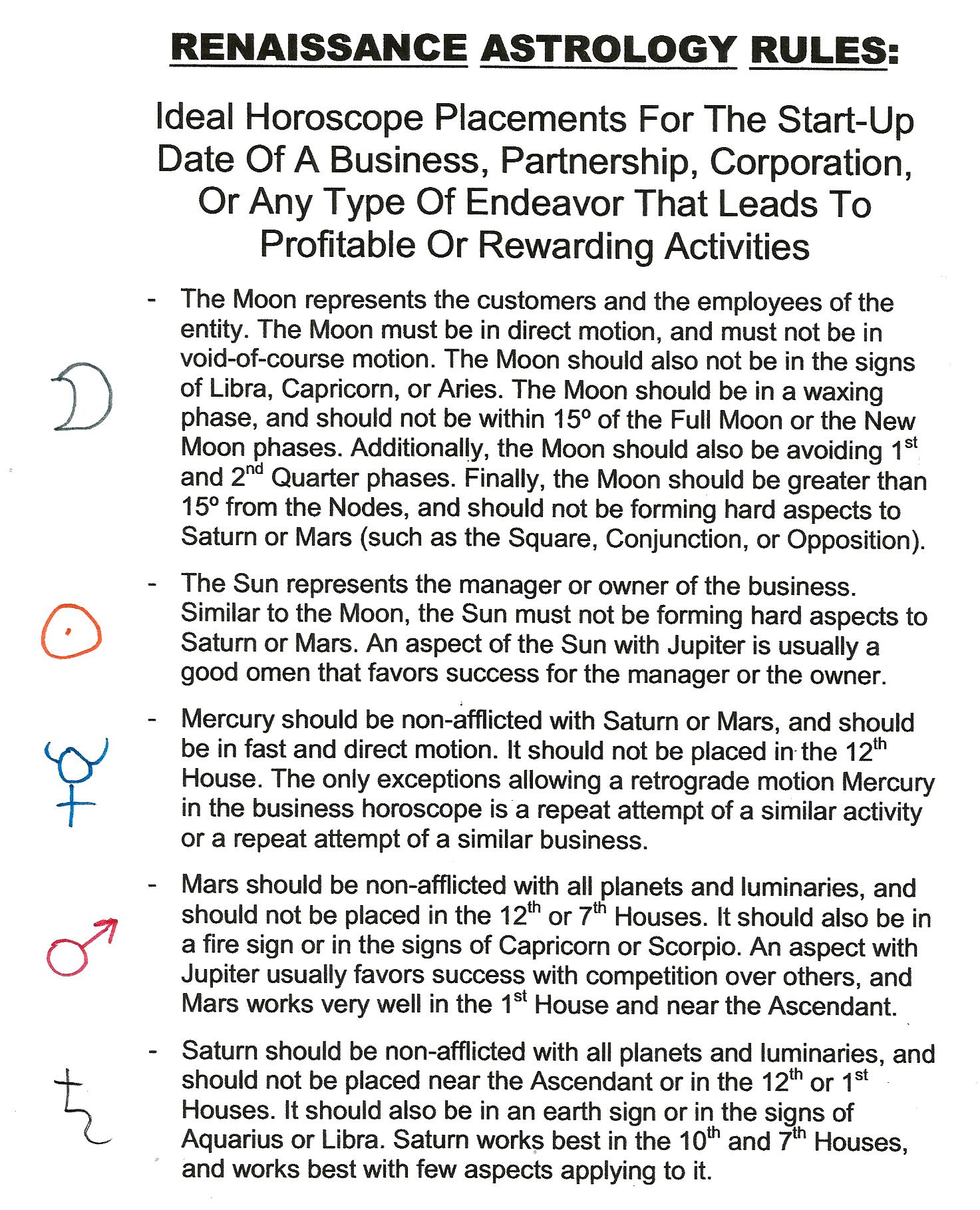 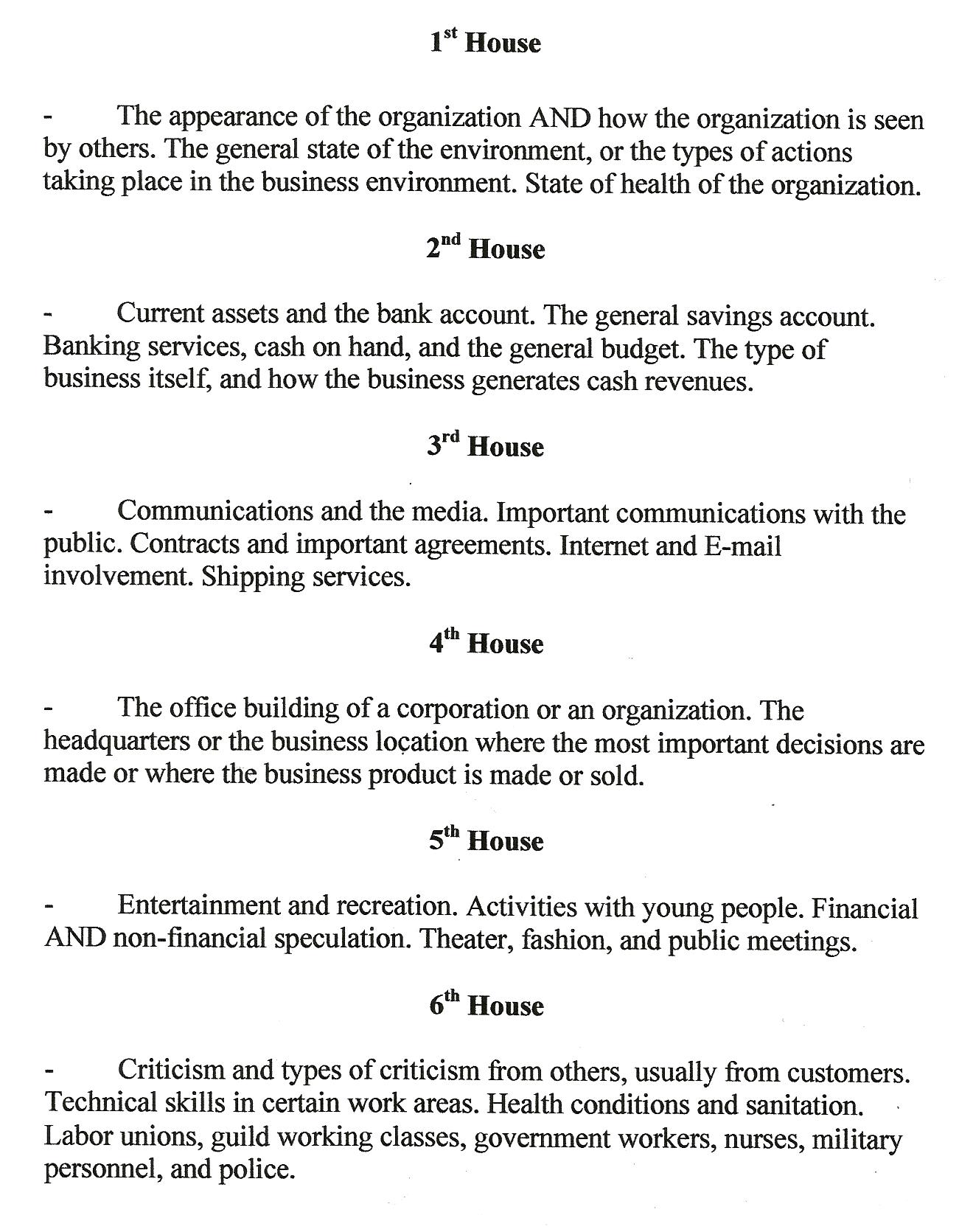 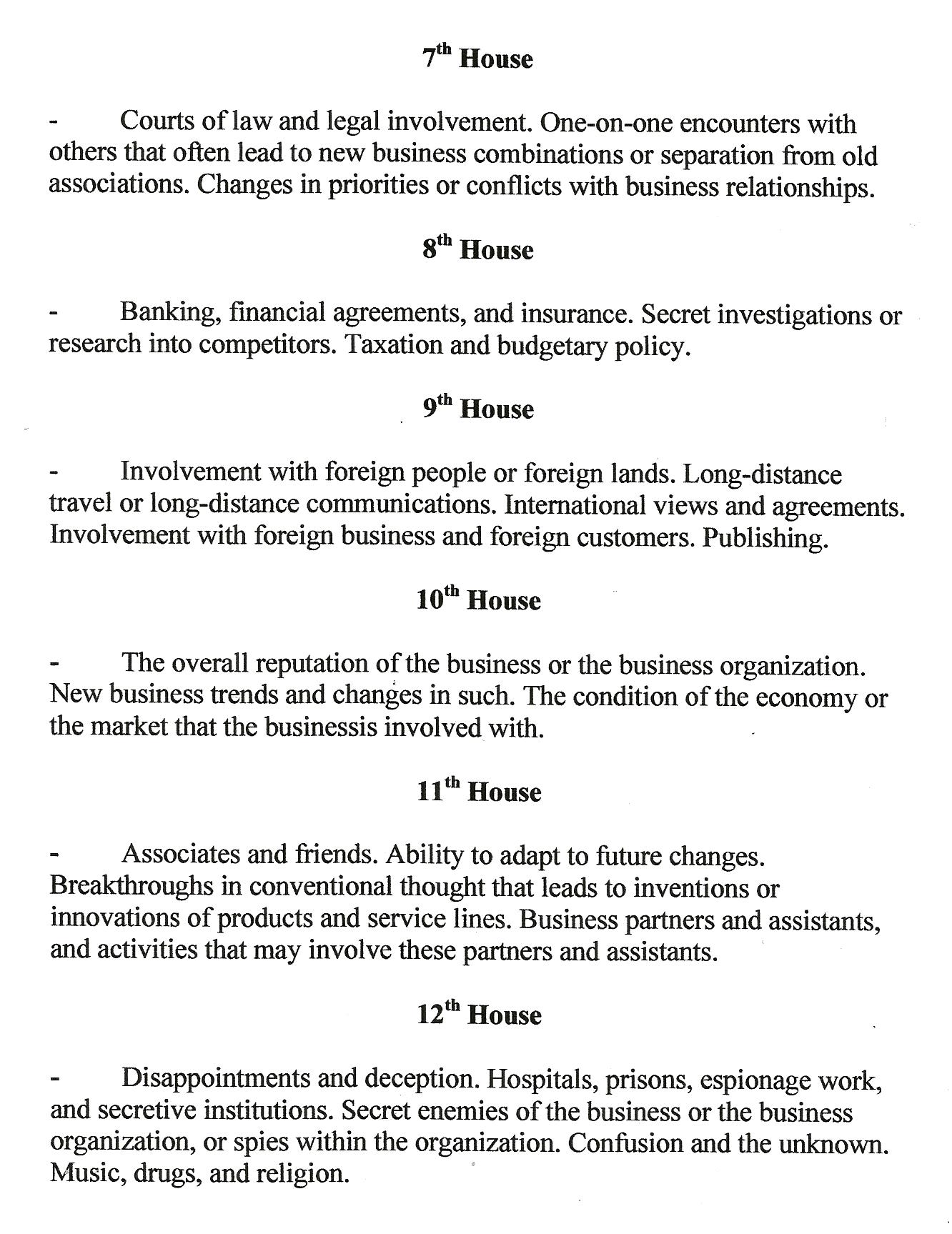 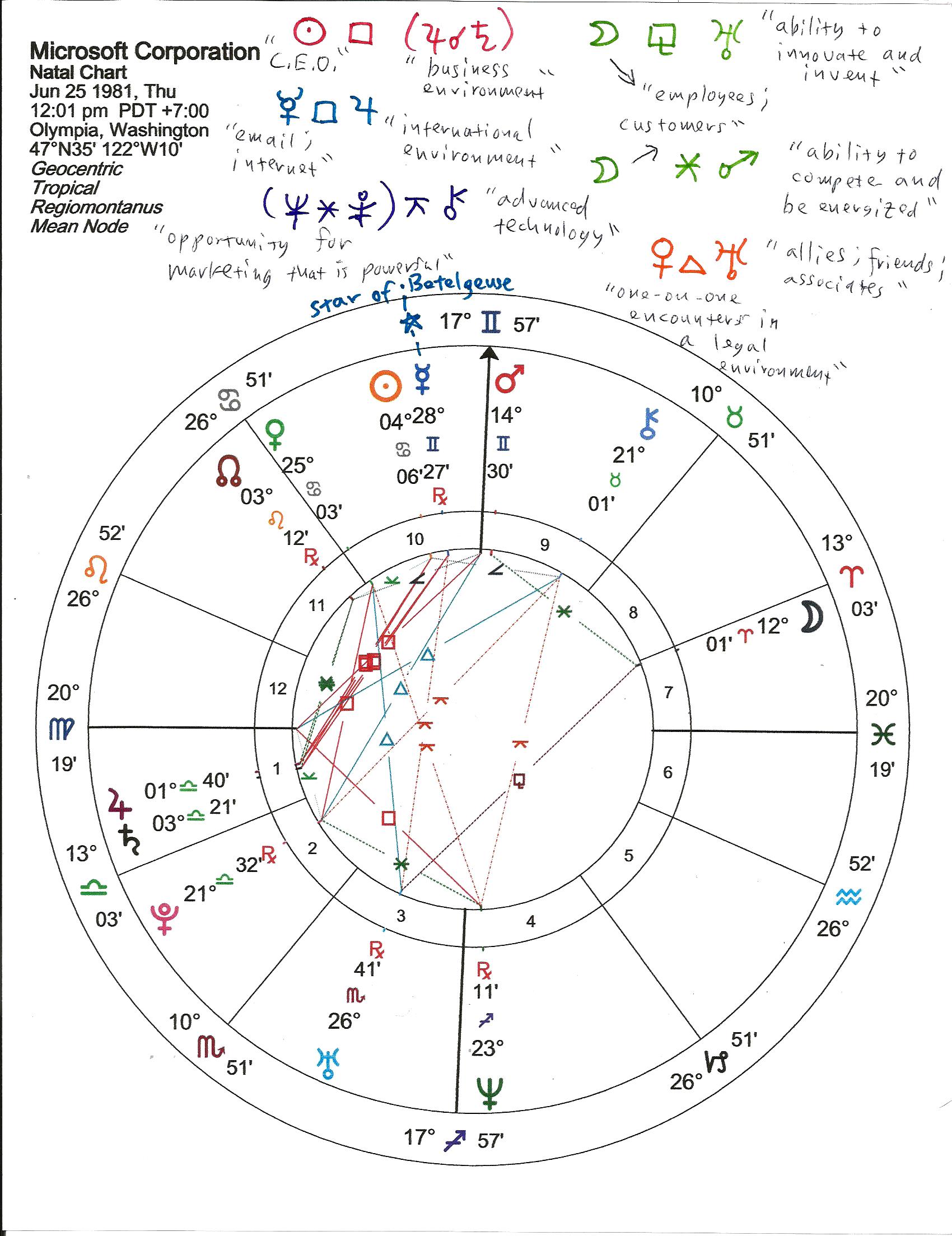 Microsoft C.E.O. Bill Gates had a goal of having his product "in every business office."  Drawn in orange above, the Jupiter Conjunct Saturn placement can define "the business environment,"  and with the Sun ("the C.E.O.") forming a Square with this placement, this can define an interest of the C.E.O. with the business environment as a key target for the business product being sold. Drawn in green above, the Moon ("employees, customers") forms a Sesquiquadrate with Uranus ("ability to innovate and invent"). This defines that not only are the employees desired to have inventive and innovative abilities, but the customers are also expected to have similar inventive and innovative abilities (in concurrence with their use of the business product being sold to them). The Moon Sextile Mars placement of Microsoft's chart indicates that the employees and the customers to be highly energetic and to be very competitive (and this is similar to the Moon Trine Mars placement discussed in Part One of this series (with The Beatles)). Drawn in blue above, Mercury Conjunct the star of Betelgeuse is significant. This is because Mercury represents "the internet, e-mail (and also secretarial duties)" and Betelgeuse is a star that was used in ancient times for "assuring military victory."  Here are what my notes say about the star of Betelgeuse:

The Mercury Square Jupiter placement offers an additional probability of good luck in the areas of "internet, email," and in an "international environment" (since Jupiter rules "international environment"). Drawn in orange above, Venus traditionally rules "artwork" (which was emphasized in Part One of this series with The Beatles). But Venus can also represent "one-on-one encounters in a legal (or an adversarial) type of environment." This may explain why the Sun sign of Libra (which rules Venus) is the dominant sign in the military; the ability to engage in "one-on-one situations" with others (and succeed in such situations) is necessary for one to advance in the military. And because Microsoft was more associated with the legal environment than with the art environment in their early years, the Venus Trine Uranus placement may represent the great harmony of association and friendship that Microsoft had with their attorneys in their early years (and these attorneys may have even played a role in the innovation of the business product, since Uranus rules "innovation" and "invention"). Drawn in purple above, Chiron ("advanced technology") is the focus of a "yod" ("finger of God") with the Neptune Sextile Pluto placement. A yod takes place when two planets are engaged in a Sextile and a third planet is near the midpoint of this Sextile per Quincunx aspects. Yods are significant in karmic astrology, but the role of a yod in business astrology may define an important relationship of some kind. My interpretation is that Chiron ("advanced technology of Microsoft") is the focus of "opportunity for marketing to be powerful and transforming" (Neptune Sextile Pluto). This defines great success for Microsoft's marketing capability for it's product. 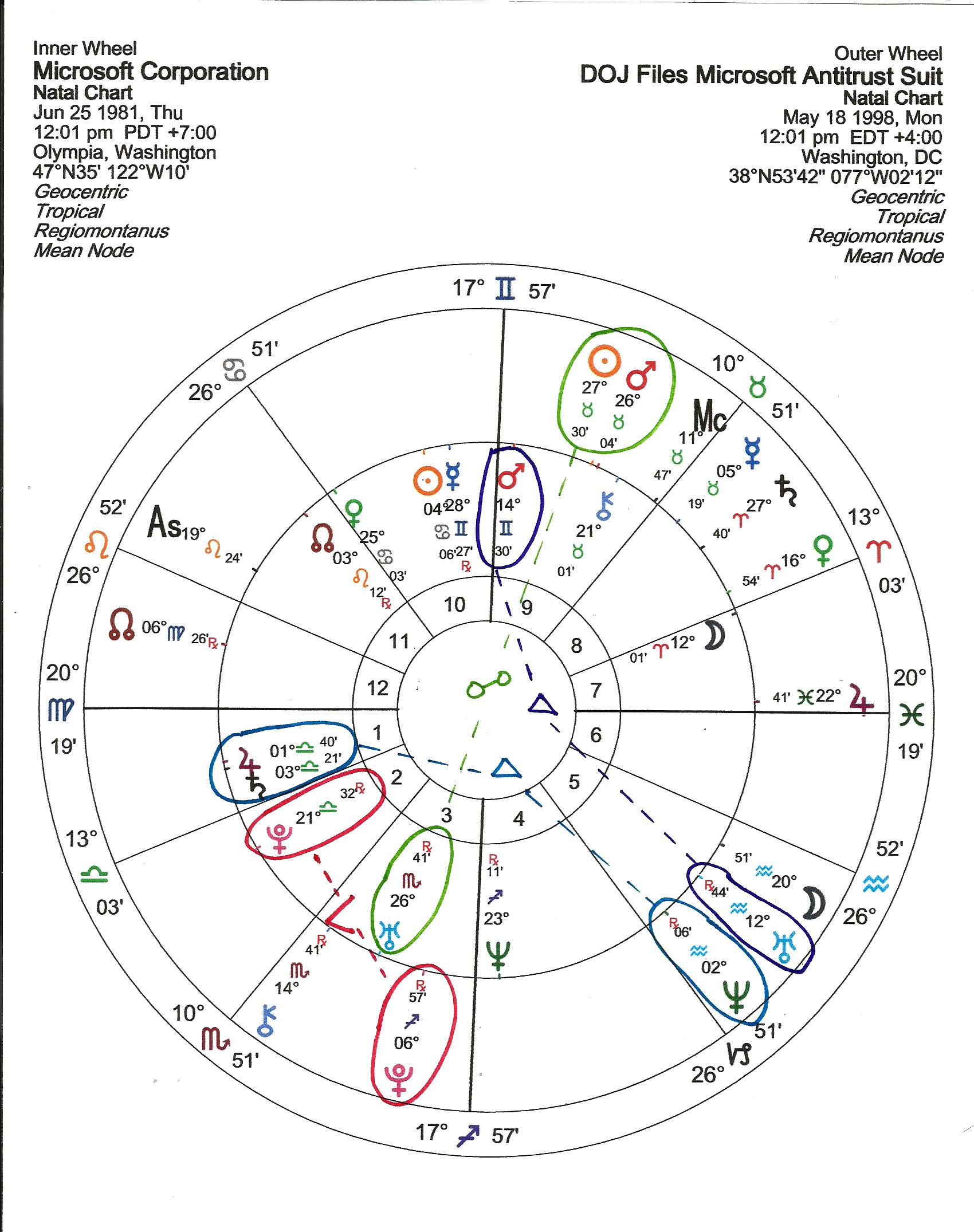 Pluto Semi-Square Pluto (drawn in red above) is indicative of a crisis taking place (similar to Pluto Square Pluto). Drawn in green above, transiting Sun Conjunct Mars forms an Opposition with natal Uranus, and this indicates an energized competition presenting Microsoft with "a big surprise" (and also a shock to their "ability to innovate and invent"). Drawn in purple above, the Uranus Trine Mars transit may indicate "a big surprise to one's ability to compete with others." Finally, drawn in blue above, transiting Neptune ("disappointments") Trine the natal Jupiter Conjunct Saturn placement ("business environment") indicates a big disappointment may be in the works for Microsoft's business product. 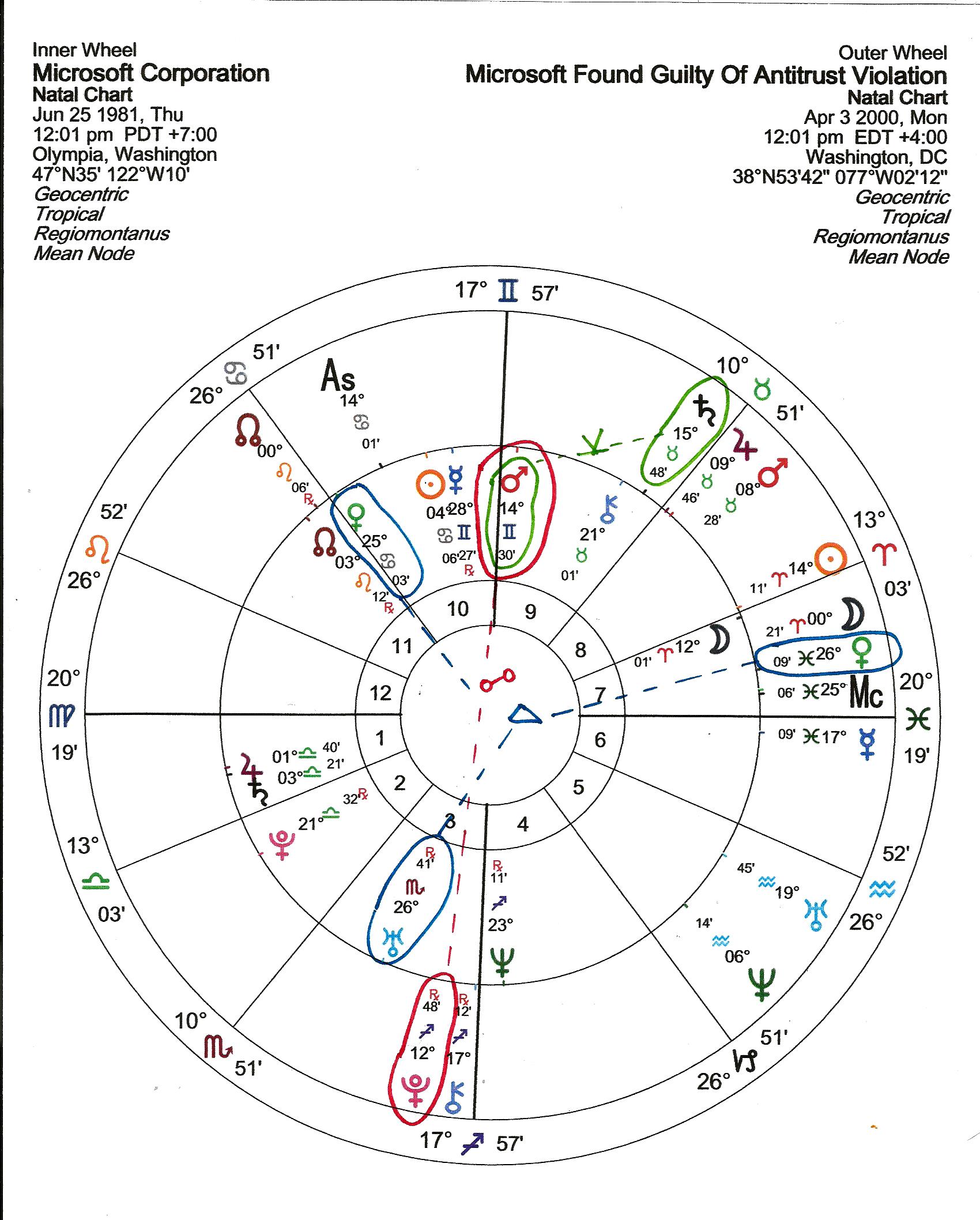 Drawn in red above, Pluto Opposition Mars indicates "crisis involving one's ability to compete against others." The Saturn Semi-Sextile Mars transit (drawn in green above) indicates "government involvement or restrictions that concern one's ability to compete against others." Finally, drawn in blue above, transiting Venus forms a grand Trine with the natal Venus Trine Uranus placement. This indicates some sort of legal decision made that concerned Microsoft's lawyers and associates. 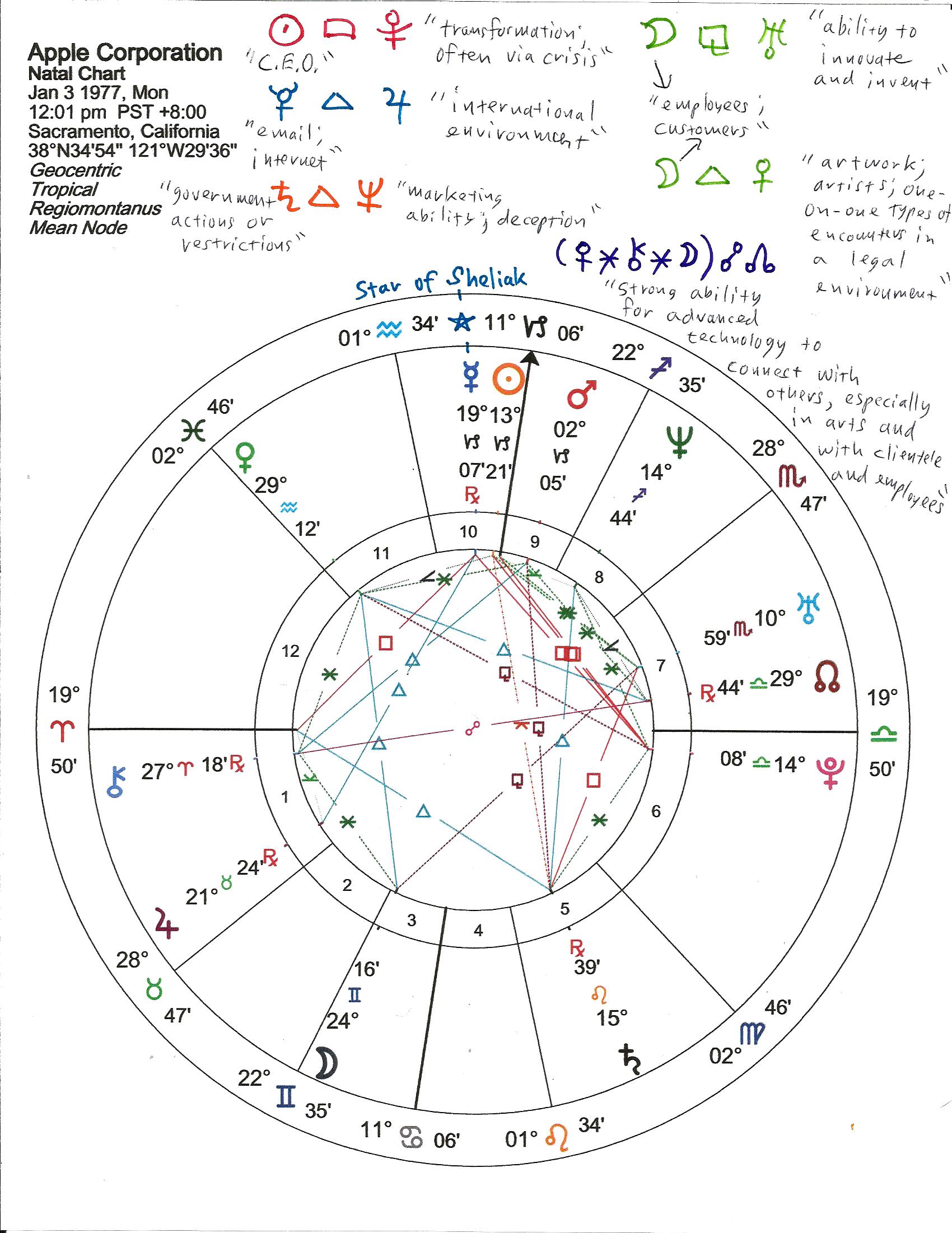 Drawn in red above, the Sun ("The C.E.O.") Squares Pluto ("the ability to transform and change, often due to crisis"). This is a classic description of Steve Jobs; the vision of his business product concept in the early years was subject to crisis due to an inability to transform the product for significant business purposes. This was evident since individual use of computers (as opposed to business use of computers) was the focus of Jobs' business product concept. This gave the advantage to IBM with their growing PC sales (which were using Microsoft's product) as opposed to Apple's computer sales since home computer use was minimal and rare compared to computer tasks needed to be done in a business office environment. But drawn in green above, Apple has a Moon Sesquiquadrate Uranus placement (just like Microsoft. And like Microsoft, this defines the Moon ("employees, customers")  Sesquiquadrate with Uranus ("ability to innovate and invent") to have employees with inventive and innovative abilities, and the customers also having similar inventive and innovative abilities (in concurrence with use of the business product being sold to them)). This astrology aspect of the Moon would manifest with the introduction of the Apple Macintosh in the mid 1980's; the graphics and desk-top publishing capabilities offered by the "Mac" would target a unique market. This market would enhance the Moon Trine Venus placement above: "artwork, artists, graphics, and writers desiring to insert illustrations into their written works." Drawn in blue above, Mercury rules "the internet, emails," and Mercury is Conjunct the star of Sheliak. I call this star "The David Bowie Star," because Bowie's Sun position forms a hard Conjunction with this star. Here are what my notes say:

This placement obviously favors artwork for Apple, and the Macintosh computer was perfect for this due to it's focus on drawing and illustration. Similar to Microsoft's Mercury Square Jupiter, Apple's Mercury Trine Jupiter placement offers an additional probability of good luck in the areas of "internet, email," and in an "international environment" (since Jupiter rules "international environment").

Drawn in orange above, Saturn Trine Neptune may indicate "restrictions on one's marketing ability, especially in a government environment." Again, this may define that the PC proved to be a better business tool (initially in the early 1980's) compared to Apple's computer products. Finally, drawn in purple above, Chiron ("advanced technology") is very well placed on Apple's chart. Chiron is very close to the midpoint of a Moon Sextile Venus placement, and this may define the success of the IPod per this description: "advanced technology" (Chiron) "is the main focus or tool involving one-on-one encounters of the customers/public" (Moon/Venus). Also note that Chiron is in Opposition with the North Node, and this defines "connections with others." Hence, this very advantageous Chiron placement combines with the very advantageous Mercury Trine Jupiter placement to allow Apple to bypass Microsoft in a unique and HUGE market: one-on-one communications among the individual members of the public (i.e. the customers of Apple).

Is Apple About To Face Antitrust Violation Issues Like Microsoft?

I am going to say yes, but not as bad as Microsoft. Pluto goes direct from July to November of 2019, and a Pluto Trine Jupiter transit ("successful transformation") is strong during this time-frame of July to November of 2019. This offers much protection for Apple. But keep in mind that transiting Saturn goes direct during this same time-frame also, and forms a very hard Square to Apple's natal Pluto placement. Saturn Square Pluto may define "depression; restrictions on transformation." These two transits (Pluto Trine Jupiter and Saturn Square Pluto) may "offset each other," since one is a positive transit and one is a negative transit (and both are taking place at almost the same time). Note that the transit of Jupiter Conjunct Neptune will also be strong from July to September of 2019; this is a very bad time for Apple to be "speculating." Hillary Clinton had this transit days before the 2016 election, and her "speculations" about winning were proven to be wrong. Late November 2019 to January 2020 looks particularly hazardous for Apple. Natal Mercury in Capricorn is of some concern; transiting Saturn ("restrictions") Conjuncts natal Mercury ("the internet") while transiting Uranus ("surprises") Trines natal Mars ("competition or ability to compete") during November 2019 to January 2020. Please note that Microsoft had this same Uranus Trine Mars transit when the D.O.J. filed its antitrust lawsuit on Microsoft. Thus, watch for some possible "legal rumbling" regarding Apple's business practices in fall of 2019, and then watch for possible "legal fireworks" during winter of 2019-2020 concerning possible antitrust violations of Apple Computer Corporation.

Read more…
Started by James McConnell in Spirituality In General, Channeling and Channeled Messages, and Ascension and Awakening
0 Replies
Views: 861