This is an old unsolved mystery for me. How did Jesus of Nazareth die so quickly via crucifixion (1-2 days) when history reveals that crucifixion takes 1-2 weeks to kill a person? It is my opinion that Jesus "faked" his death via a Tibetan yoga process known as de'log that shows all physical and physiological symptoms of death (with his followers probably aware of what he was doing). For a better perspective on Tibetan de'log, please read the research article "The Dead Arises: Cases of Death and Return in Tibet" by Joseph Langerfeld. Click https://www.ashtarcommandcrew.net/forum/topics/tibetan-de-log-and-how-jesus-faked-his-death-via-the-crucifixion Now on to the astrology analysis. 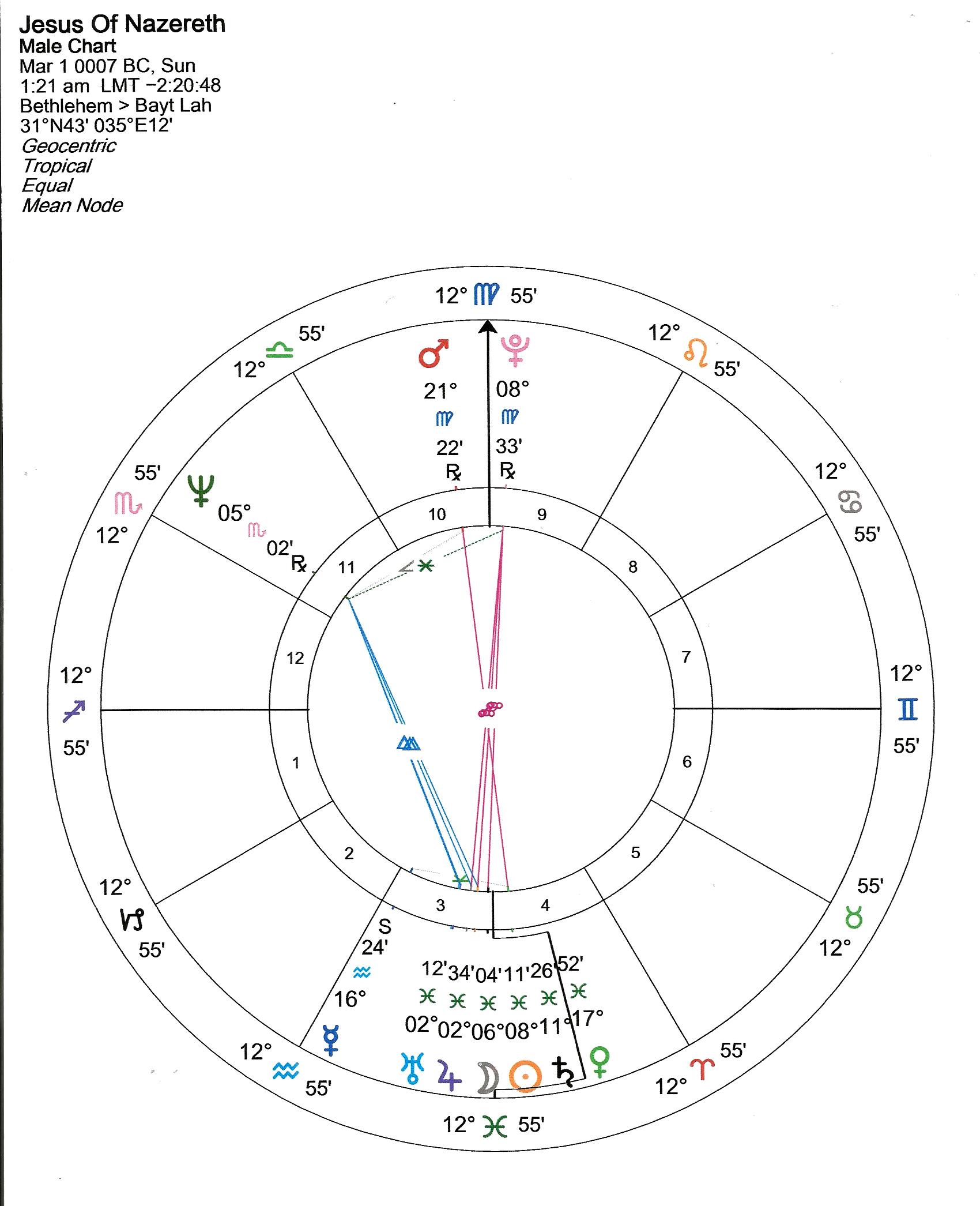 Now let's add the Nodal plane to the chart above, and we now create a "mystical rectangle" planetary formation (below) that strongly suggests possible prophetic talent. 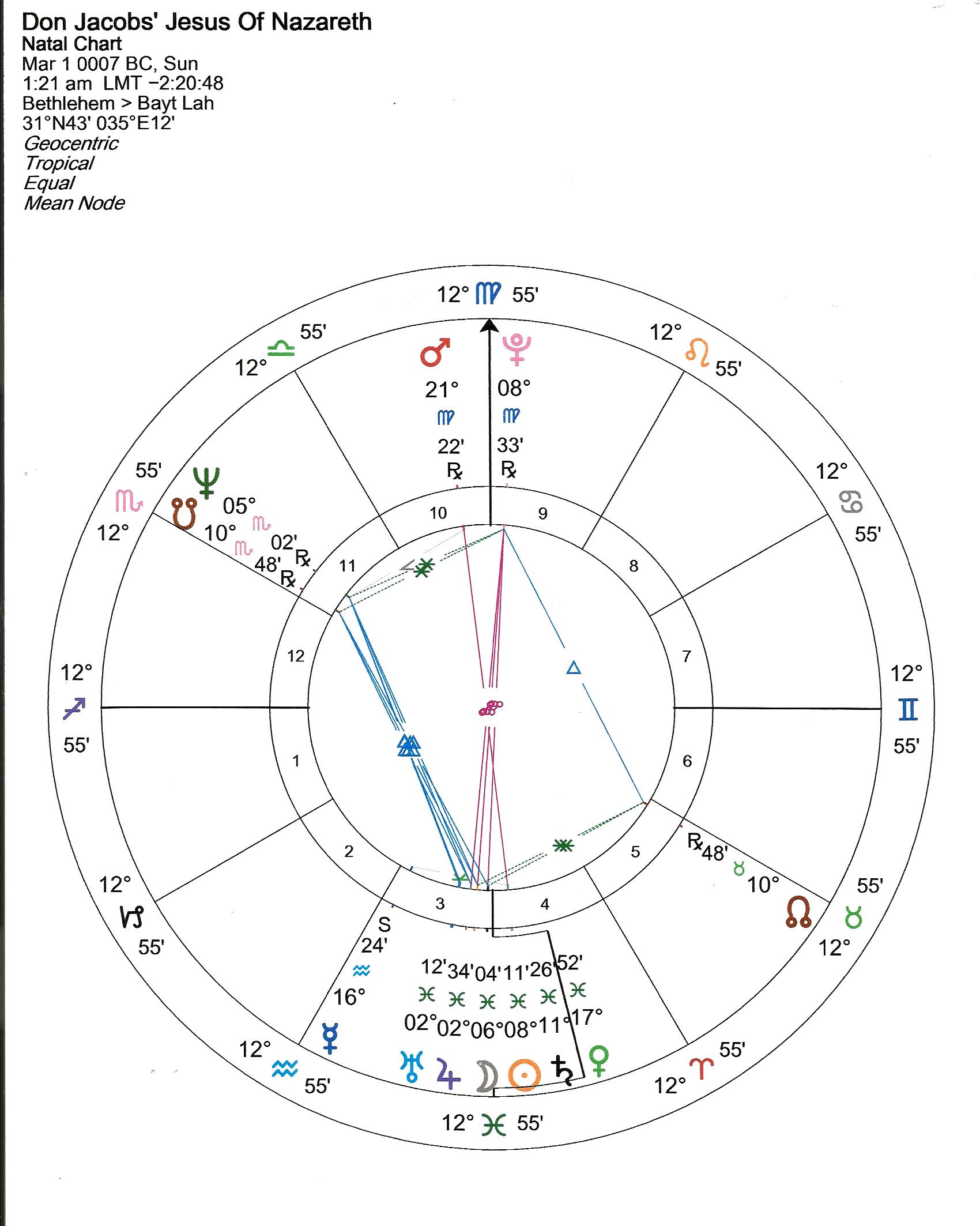 Finally, below is the chart I am going to use. I include the Part of Fortune and the Vertex, and use a Koch House system as opposed to Don Jacobs' Equal House system. 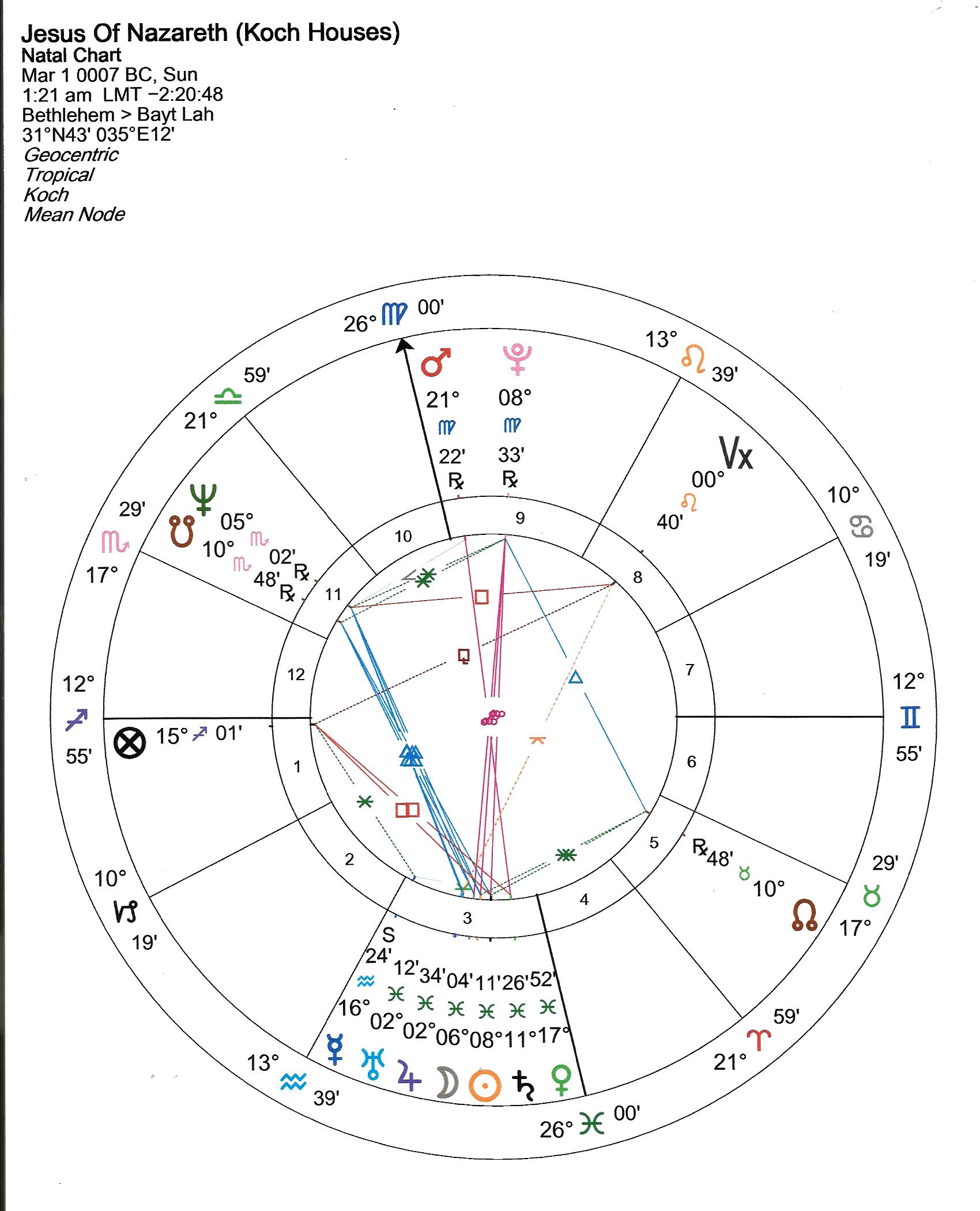 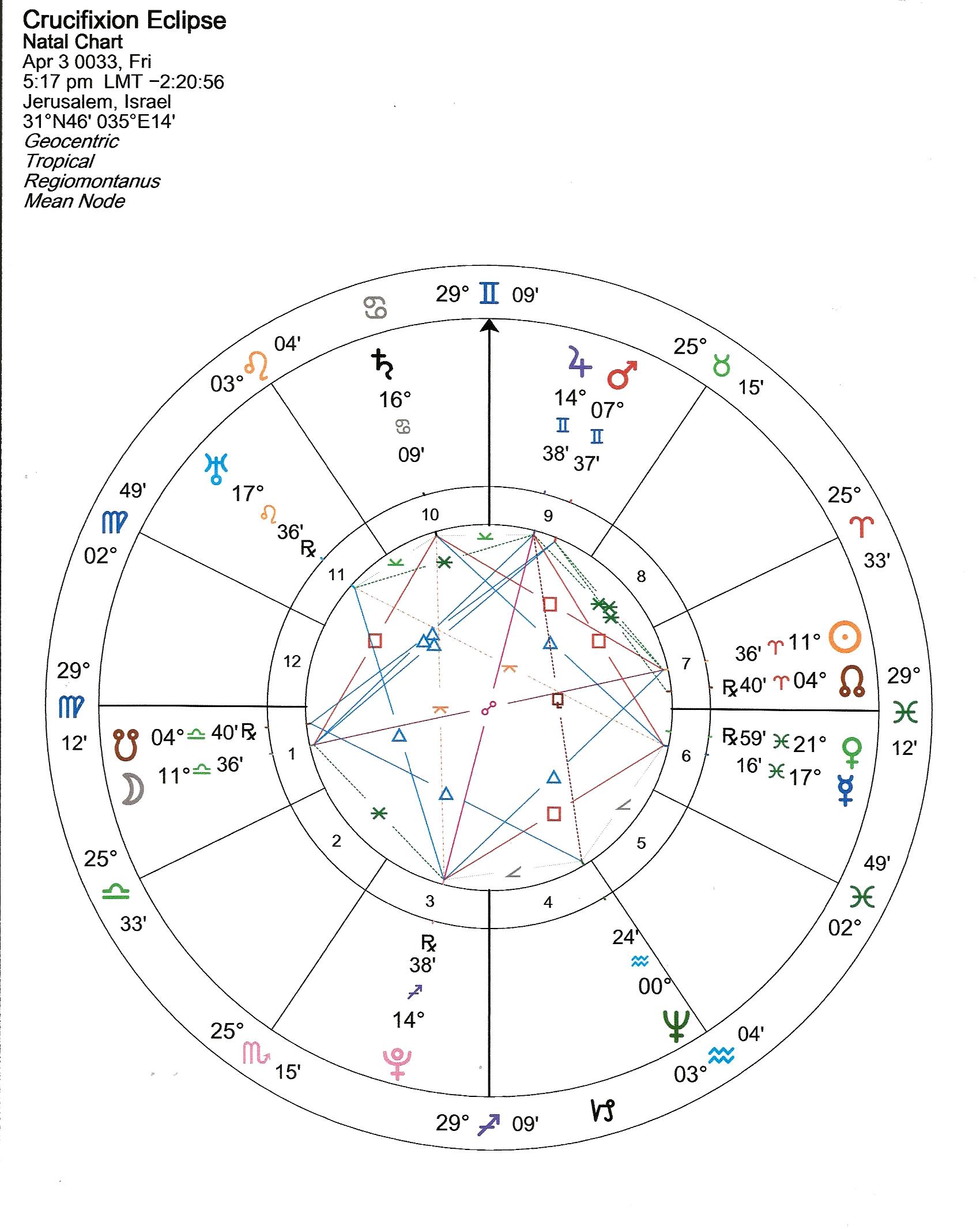 In addition to the Lunar Eclipse, other stand-outs with the crucifixion horoscope above is the exact Jupiter Opposition Pluto placement and the entry of Neptune into Aquarius. We will look at these two transiting placements relative to the horoscope of Jesus below: Circled in blue above is the Jupiter Opposition Pluto transit on top of the Part of Fortune, with Pluto close to Conjunction (and the Part of Fortune usually indicates "successful areas for career; areas of life to be profitable or for one to be well-known"). Note that transiting Jupiter will exactly oppose the natal Part of Fortune of Jesus later that night to the early AM. Also note that the Midpoint of Jesus' natal Mars/Pluto midpoint ("the plan") forms a strong T-Square to this Jupiter Opposition Pluto transit over the Part of Fortune (which in terms of synastry defines "successful transformation with one's career" or "transformational success in areas of life where one will be well-known" EQUALS "the plan"). Also note above (circled in green) that the crucifixion transiting Neptune ("deception") is in Opposition with Jesus' natal Vertex placement ("fated encounters") in the 8th House ("death"). This may define that Jesus performed some sort of deception relative to death. Finally, note the hard Square between the transiting crucifixion Mars (near the Descendant ("area of open enemies") of Jesus) and Jesus' natal New Moon placement (circled in red above). This indicates a big conflict relative to relationships with the public at large, and there was probably a lot of arguments, name-calling, and debates taking place during the time of the crucifixion. Now let's look at advanced interpretations below. 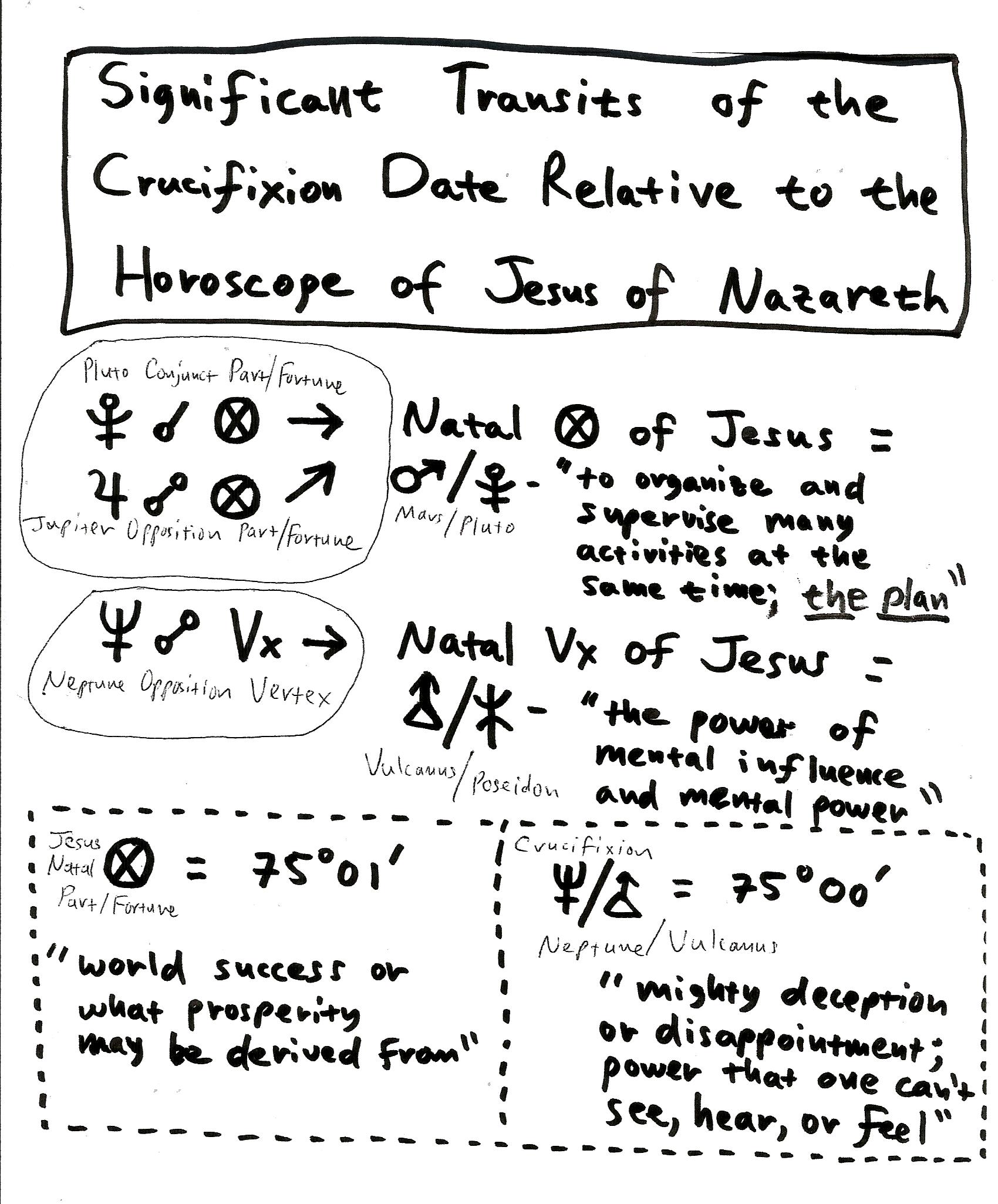 Looking at the formulas above, this defines that Jesus may have successfully planned a major deception of some kind relative to death. And I say this "deception" was Jesus becoming a Tibetan de'log, leaving the body as a corpse and then returning to it later. This would earn him Pisces Age success and influence as demonstrating proof that we have a spiritual component that cannot be destroyed and which also defines life itself. Looking above at the crucifixion transiting Mars Square natal Sun/Moon placement, we obviously have a big public relations conflict and arguments going on at the time of the crucifixion. And with Mars/Poseidon nearby, "politics" was the probable subject or cause of this name-calling and arguments (involving Jesus) that may have been going on at this time of the crucifixion. Finally, let's look at  Jesus' natal type-3 planetary picture defining "one's own death." We once again see Neptune/Vulcanus ("mighty deception") near this formula, and very close to this formula is Saturn/Uranus ("shocking separation from others"). This may define "a mighty deception involving separation from others in some way." This seems to define Tibetan De'log, in which one is able to leave the body in a state of a dead corpse. But he didn't die.... he successfully returned to his body: nail wounds, sword wound, whip scars on the back, and everything....

The major presence of Neptune/Vulcanus ("mighty deception") on both the crucifixion horoscope and the natal horoscope of Jesus indicates that some sort of big deception took place. And this deception was probably that Jesus was dead, and he wasn't. He became a Tibetan De'log, a form of yoga in which the spirit leaves the body in a corpse state and can return at a later time. Crucifixions take longer than 1-2 days to complete. Unless someone can come up with a better explanation for what happened (i.e. poisoned vinegar on the sponge given to him), I remain solid with this explanation regarding the crucifixion of Jesus of Nazareth.